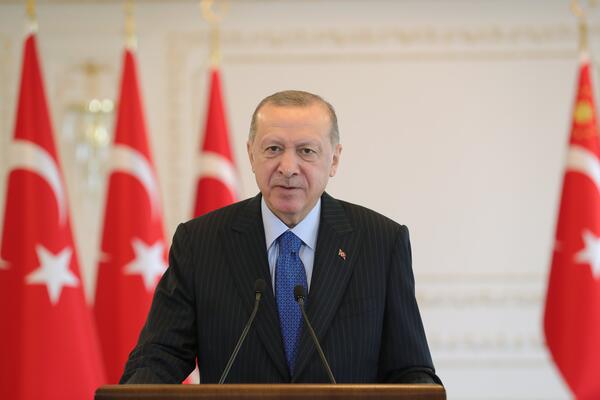 Those who threaten Turkey with sanctions will end up disappointed, the nation’s president said on Dec. 19.

“We are determined to put across that Turkey will never hesitate to use its sovereign rights,” President Recep Tayyip Erdoğan said at a highway opening.

“They tried to confront Turkey using every method, such as using terrorist group, coup attempts, political and economic traps, sanctions,” he added, speaking via video link. “Thank God they have not been successful so far.”

But, he said, Turkey can work with those who treat it with respect and fairness: “We leave the door open for those who are ready to sit and talk with us on equal terms and agree with fair offers.”

Touting the nation’s accomplishments, he said: “Becoming a major hub for intercontinental trade is a major achievement for Turkey which will benefit all 83 million of our people.”

As needed infrastructural investments are completed for a powerful Turkey, it is increasingly becoming a magnet for domestic and international investors, Erdoğan said.

“The biggest proof of this is that we have attracted $220 billion of international investment so far,” he said, adding: “We expect a big breakthrough in the days to come.”

Erdoğan also stated that by opening 30 new airports, for a total of 54 nationally, they made it possible for the public to travel every corner of the country.

The U.S. on Monday imposed sanctions on Turkey over its acquisition of the Russian S-400 missile defense system.

U.S. officials have voiced opposition to the deal, claiming the S-400s would be incompatible with NATO systems and would expose F-35 jets to possible Russian subterfuge.

Turkey, however, stressed that the S-400s would not be integrated into NATO systems, and pose no threat to the alliance or its armaments.

The president also extended sorrow over a fire early on Dec. 19 in a hospital in the southeastern Gaziantep province.

The fire, which took ten victims, was caused by a high-flow oxygen therapy machine used to treat COVID-19 patients, according to a statement by the SANKO University Hospital.

Over 50 people, including doctors, medical personnel and security guards, were affected when moving patients, and 10 staffers are getting oxygen therapy.

This article originally appeared in Hurriyet Daily News on 19 Dec 2020.