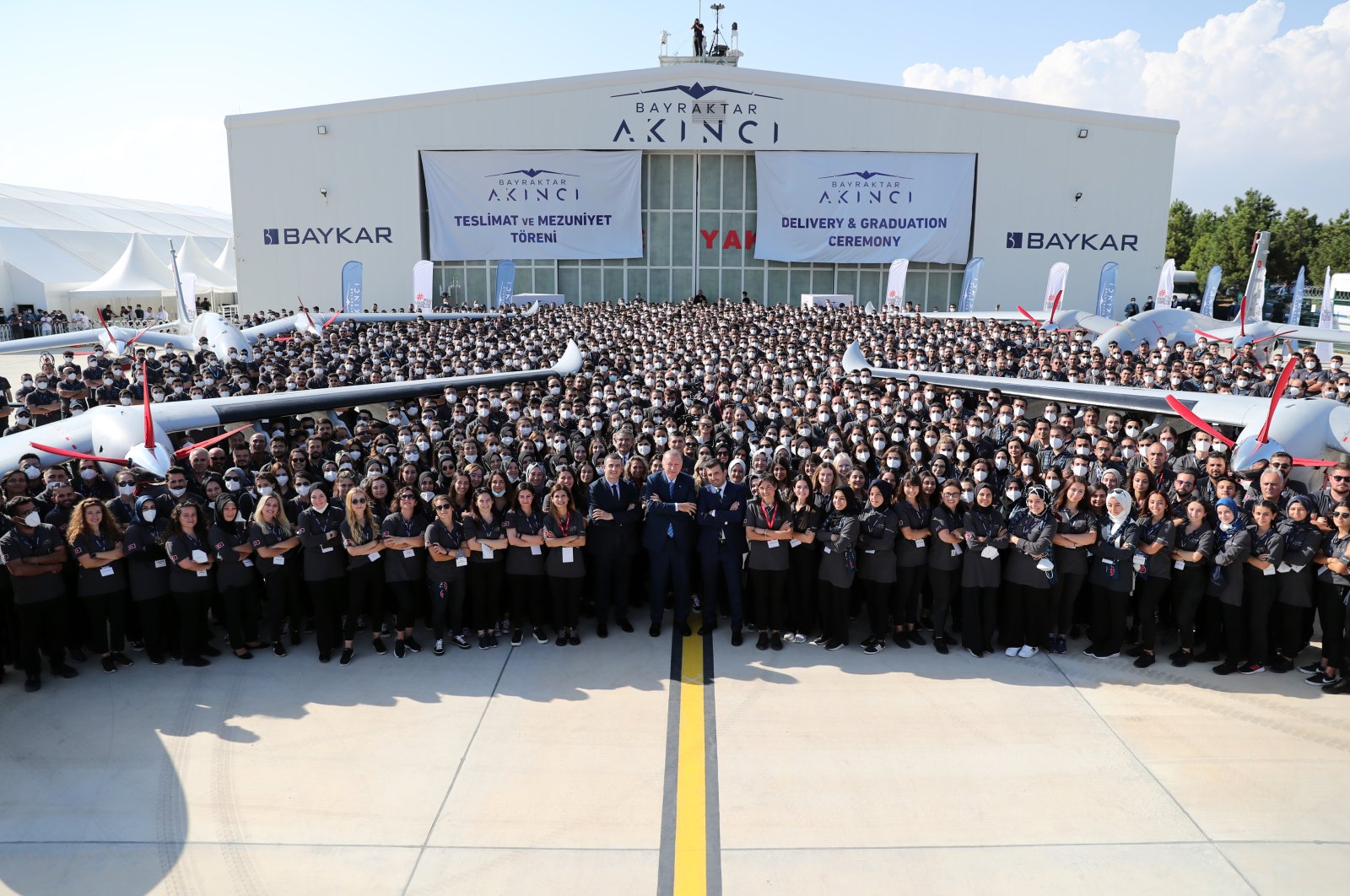 President Recep Tayyip Erdoğan (C) and Baykar officials and employees are seen beside Akıncı UCAVs on the sidelines of the delivery ceremony in the Tekirdağ province, northwestern Turkey, Aug. 29, 2021. (AA Photo)

Security forces get Akıncı, Turkey’s most advanced drone to date

The Turkish military Sunday received a delivery of the most advanced and sophisticated drone built by the country to date, enlarging a fleet that has already proved its success in the field.

The Bayraktar Akıncı, an unmanned combat aerial vehicle (UCAV), has been developed by the drone magnate Baykar.

This cutting-edge combat drone entered the inventory of the Turkish security forces with a ceremony held in the northwestern province of Tekirdağ and attended by President Recep Tayyip Erdoğan, Baykar’s Chief Technology Officer (CTO) Selçuk Bayraktar and many other officials.

Addressing the ceremony, Erdoğan said Akıncı places Turkey among the three most advanced countries in this technology. 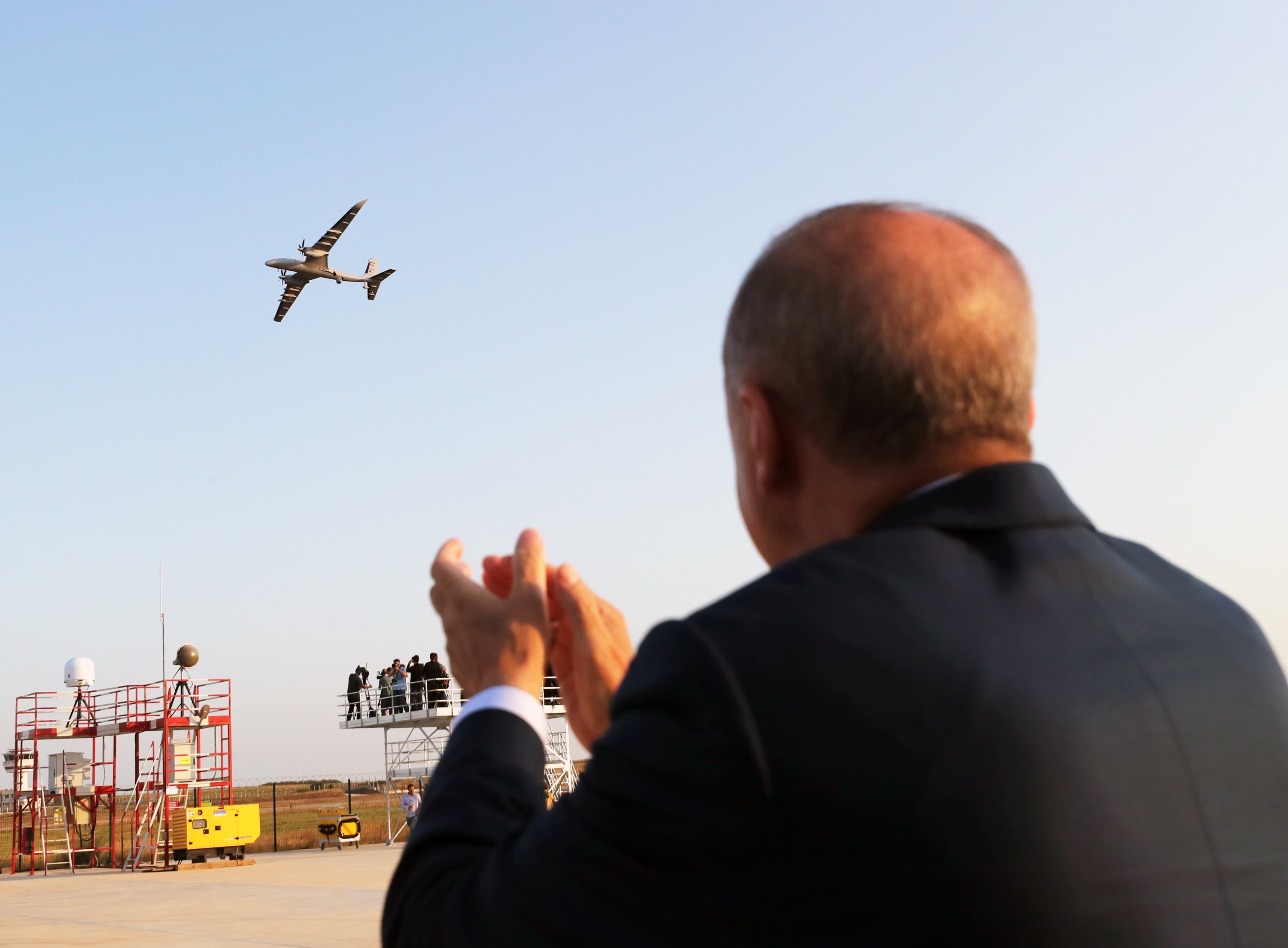 The aircraft – whose designs, software, avionics and mechanics all belong to Baykar – is more advanced than the company’s Bayraktar TB2 UCAV, which has been sold to countries including Ukraine, Qatar, Azerbaijan and Poland. In May, Poland became the first European Union and NATO member state to acquire drones from Turkey.

Saudi Arabia is also said to have been interested in buying Turkish drones. Latvia also hinted that it could be the second European Union and NATO member state to acquire the Turkish UCAVs. Albania is also interested in striking a deal to procure Bayraktar TB2s.

Erdoğan said many more export deals have been made, adding that new agreements were underway. “Many more countries are waiting in line for our national UCAVs,” he noted.

“This has enabled us to secure 70% of our revenues from exports,” Bayraktar stressed.

The Akıncı is longer and wider than the Bayraktar TB2 and will perform strategic tasks. It has a 20-meter (65-foot) wingspan with its unique twisted-wing structure. It promises high flight safety thanks to its fully automatic flight control and triple-redundant autopilot system.

The Akıncı will carry various weaponry, including a range of missiles such as Smart Micro Munitions (MAM-L) developed by prominent Turkish contractor Roketsan.

It will be equipped with the locally produced active electronically scanned array (AESA) radar and air-to-air missiles Gökdoğan (Merlin) and Bozdoğan (Peregrine).

It will be able also to launch several other types of locally made munitions, such as the Roketsan-built Stand-Off Missile (SOM), a long-range air-to-surface cruise missile that can hit targets up to 150 miles (240 kilometers) away.

Baykar says the Akıncı can attack targets both in the air and on the ground. It can also operate alongside fighter jets and fly higher and stay in the air longer than Turkey’s existing drones.

Although it was initially designed to have an impressive 24 hours of endurance, the drone stayed in the air for 25 hours and 46 minutes during the flight tests in the Akıncı Flight Training and Test Center in the Çorlu district of Tekirdağ. The drone covered a distance of 7,507 kilometers in the air.

The UCAV made its first flight on Dec. 6, 2019. It passed its first firing test in late April using the latest Roketsan-built smart munitions.

Turkey has made impressive progress in drone production in recent years, particularly with the Bayraktar TB2. Officials have said the country has become the world’s fourth-largest drone producer since Ankara took the helm for domestic production to reduce reliance on Western arms.

The defense industry will be a locomotive of every other success that Turkey will achieve in the period ahead, Erdoğan said. 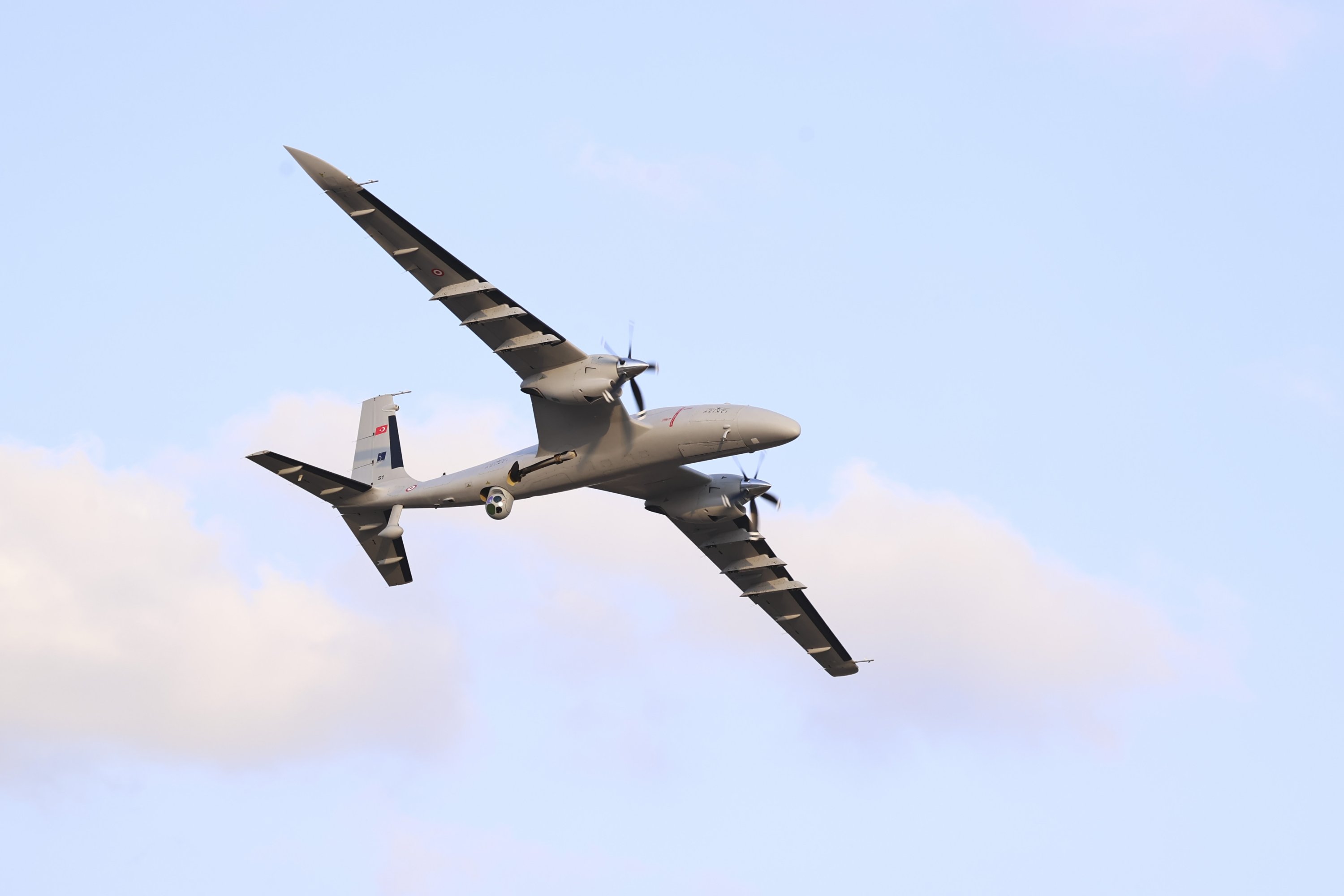 An Akıncı UCAV conducts a flight above the Akıncı Flight Training and Test Center in the Çorlu district of Tekirdağ province, northwestern Turkey, Aug. 29, 2021. (AA Photo) 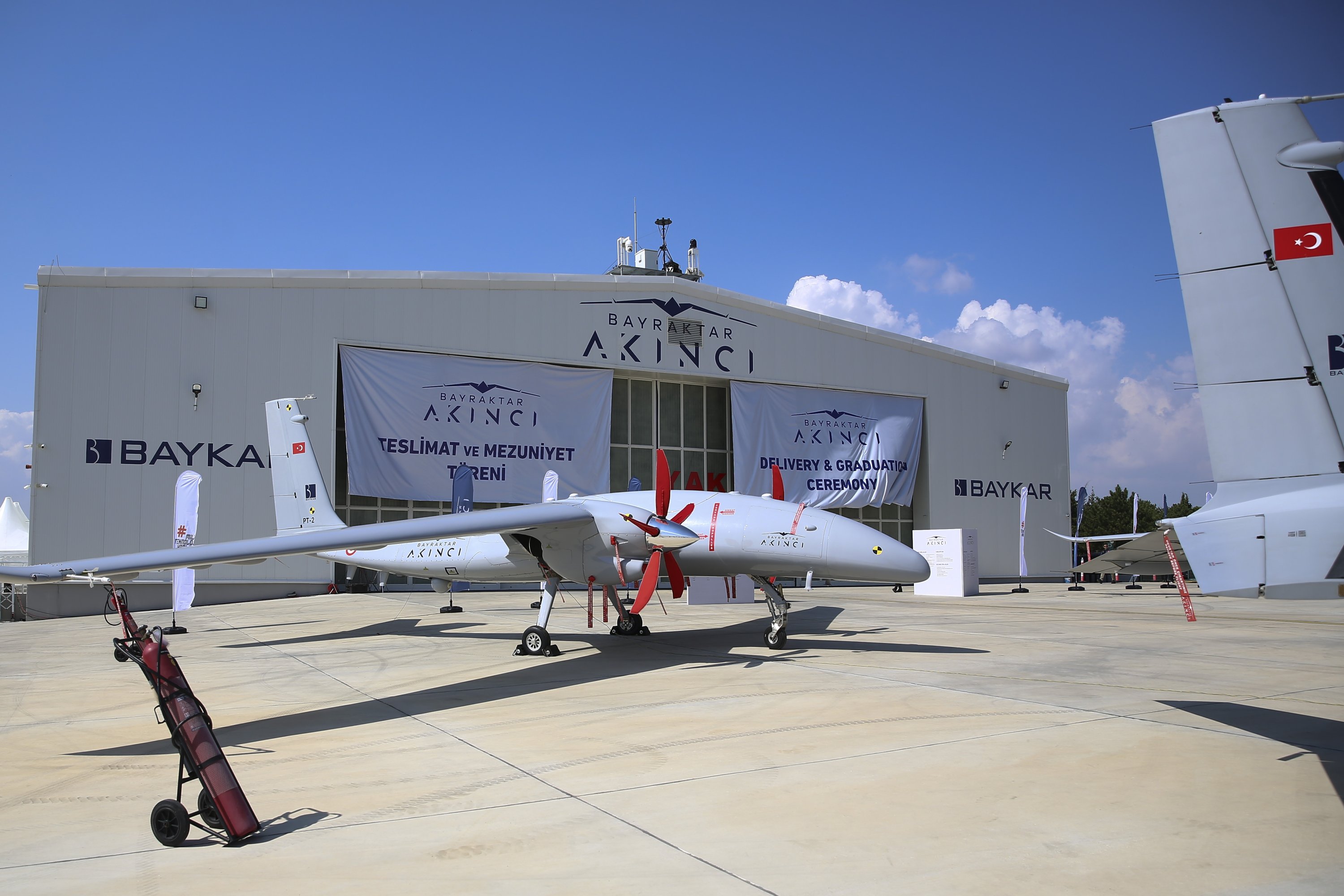 An Akıncı UCAV is seen on the sidelines of the delivery ceremony in Tekirdağ province, northwestern Turkey, Aug. 29, 2021. (AA Photo)

“Cutting the defense industry’s external dependency to 20% from 80% in such short time is one of greatest achievements in the history of the Republic,” he noted.

Having been heavily used by the Turkish security forces, unmanned aerial vehicles (UAVs) have seen combat and proven themselves.

They had devastated Bashar Assad regime ground forces during clashes in Idlib province in February-March 2020. They also gave decisive air support to Turkey’s ally in Libya and successfully guided airstrikes that assassinated senior leaders of the PKK terrorist group over the last two years.

Together with Akıncı, Erdoğan stressed, the world will enter into much different negotiations.

“Anyone who wants to move even a tiny stone in our region will first have to look at Turkey, seek its consent and evaluate its approach to peace and stability,” he noted.

In his speech, Bayraktar also announced that an upgraded version of Bayraktar TB2 will perform its maiden flight in 2022.

Currently under development at the Baykar facilities, the Bayraktar TB3 will be able to takeoff and land at Turkey’s flagship-to-be amphibious assault ship TCG Anadolu.

The landing helicopter dock (LHD) type ship is said to be the first of its kind in the world as a vessel allowing the landing of UCAVs on its dock. It will be used in multipurpose operations and is set to be delivered by the end of the year or in 2022. 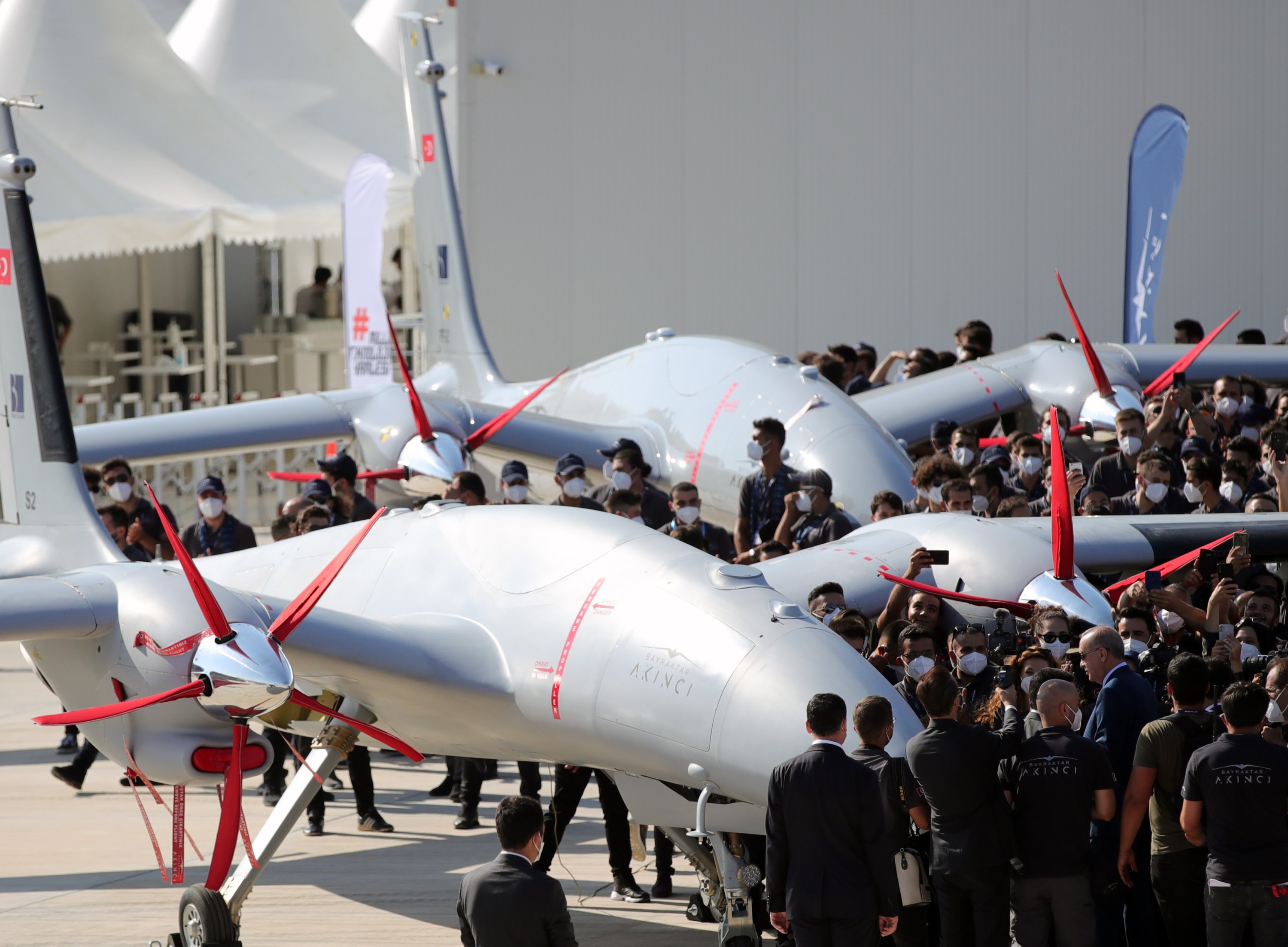 People are seen beside Akıncı UCAVs on the sidelines of the delivery ceremony in the Tekirdağ province, northwestern Turkey, Aug. 29, 2021. (AA Photo)

Baykar is also working on a domestically-made unmanned fighter jet, which Bayraktar said would make its maiden flight in 2023.

The jet is set to have five hours of endurance and will be able to reach speeds of up to 800 kilometers per hour.