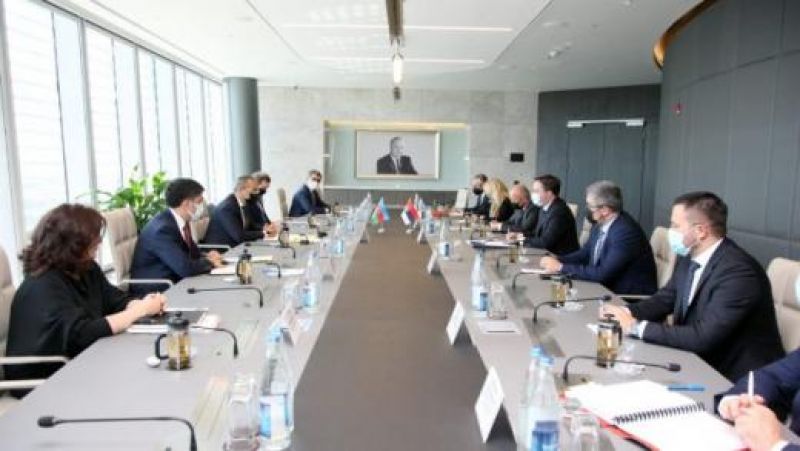 There is a great potential between Serbia and Azerbaijan in the development of trade and economic relations in agriculture, construction, transport, energy and IT. According to Azerbaijan in Focus, reporting Turan News, this opinion was expressed by Serbian Foreign Minister Nikola Selakovic at a meeting in Baku with Azerbaijani Economy Minister Mikayil Jabbarov.

“Serbia has a positive balance in trade with Azerbaijan. It is important to intensify cooperation between businessmen of the two countries to increase the volume of mutual trade. So the liberalisation of the visa regime and direct flights from Belgrade to Baku could help strengthen economic cooperation,” Selakovich stressed.

The head of the Serbian diplomacy also thanked the Azerbaijani side for offering companies from Serbia to participate in the restoration of the liberated territories of Azerbaijan. He noted that Serbian businessmen have shown interest in this proposal.

He also called on Azerbaijani companies to invest in projects in Serbia.

On April 27, there was a video conference with the participation of the Co-Chairs of the Joint Intergovernmental Commission on Economic Cooperation between Azerbaijan and Serbia – the Minister of Labor and Social Protection of the Population of Azerbaijan Sahil Babayev and Nikol Selakovich. The Azerbaijani Minister noted that the trade turnover between the two countries increased by 6.3% in 2020 and by 55.4% in the first four months of the year.

According to the State Statistics Committee of Azerbaijan, the trade turnover between the countries made up $8.5 million in 2019 and $9.06 million in 2020.