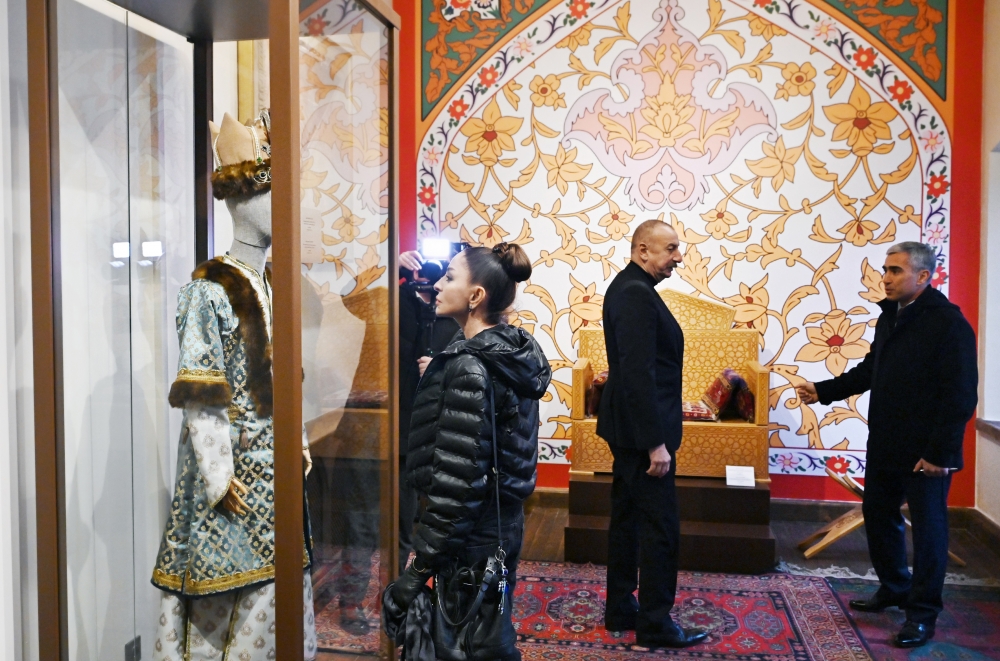 President of the Republic of Azerbaijan Ilham Aliyev, First Lady Mehriban Aliyeva and their daughter Leyla Aliyeva have viewed the restoration work carried out by the Heydar Aliyev Foundation at the Shaki Khan’s Mosque Complex, according to Azerbaijan in Focus, reporting AzerTac.

Assistant to the President Anar Alakbarov informed President Ilham Aliyev, First Lady Mehriban Aliyeva and Leyla Aliyeva of the restoration work carried out in the complex.

It was noted that restoration work in the mosque complex was carried out on the basis of a project prepared by the Architecture and Civil Engineering University on the order of the State Tourism Agency. The mosque is listed as a monument of national importance and dates back to the period of khanates (1745-1750). According to historical sources and inscriptions on it, the mosque was built by Haji Mahammadhuseyn Khan.

It was pointed out that the 21-meter minaret of the mosque was built using baked bricks and lime mortar. There is a circular staircase reaching the balcony here. The arched porch on the front façade of the mosque gives the mosque particular beauty. The mosque, designed in 1981, was never restored in the following years.

As part of the restoration work launched by the Heydar Aliyev Foundation in 2021, 3D measurement work was carried out in the Khan mosque complex located on the premises of the “Yukhari Bash” National Historical-Architectural Reserve in the city of Shaki. These activities were important in terms of reinstating the initial appearance of the mosque complex. The buildings located in the area, including the main building and minaret of the mosque, auxiliary buildings, the fence around the complex and the cemetery, were scanned and a 3D model of the mosque was prepared. During the restoration work carried out on the basis of the initial appearance of the mosque complex, the bricks that became unusable due to climate impacts were replaced with new ones and masonry work was carried out using baked bricks. In order to protect the bricks of the minaret from erosion, an insulating layer was created using special materials. At the same time, the windows used during the initial construction of the mosque and the door used by Mahammadhuseyn Khan were restored. Based on architect feedback, the original appearance of two of the windows was returned using shabaka, one of the traditional local architectural attributes.

Since there were no available photos of the mosque’s ceiling, the State Tourism Agency and designers made a joint decision to assemble a new ceiling reminiscent of the shabaka structure used in the Godak minaret mosque and the Shaki Khan Palace. The interior and exterior walls of the building were restored based on the photos of 1961.

It was noted that a new pool was built instead of the old one in the courtyard of the mosque. A protection zone has been created around the Khan’s plane and other trees in the courtyard. In accordance with the project, a ceremonial hall, an ablution room and administrative rooms have been built in the territory of the mosque. The ancient entrance gate and stairs of the mosque have been restored, including the tombstones in the Khan’s cemetery located south of it.

In June 2021, as part of the restoration work in the mosque, large raft stones were discovered underneath the sanctuary. For this reason, restoration work in that section was suspended and an inspection was carried out by the Shaki archaeological expedition. The discovery of 52 beads and a bronze rosary in the grave suggested that the buried person was of a high religious or public status. Proceeding from such a possibility, as well as Salman Mumtaz’s records, and the presence of information carried out on the basis of the information found in other different studies of the burial of Shaki Khan Mahammadhuseyn Mushtagh under the sanctuary of the Khan Mosque, additional inspections were carried out on the findings. To support experts, with the assistance of the Heydar Aliyev Foundation, samples were taken from the discovered skeleton bones and sent to the laboratory of Oxford University in Great Britain for radiocarbon and genetic analysis. Research and genetic analyses were conducted in Great Britain, Austria, Estonia and Turkiye on the basis of discovered skeleton samples and those taken from other graves of the Khan’s dynasty. The results of the laboratory analysis and the expert opinion of the ANAS Institute of Archaeology, Ethnography and Anthropology proved that the discovered grave belongs to Mahammadhuseyn Khan of Shaki.