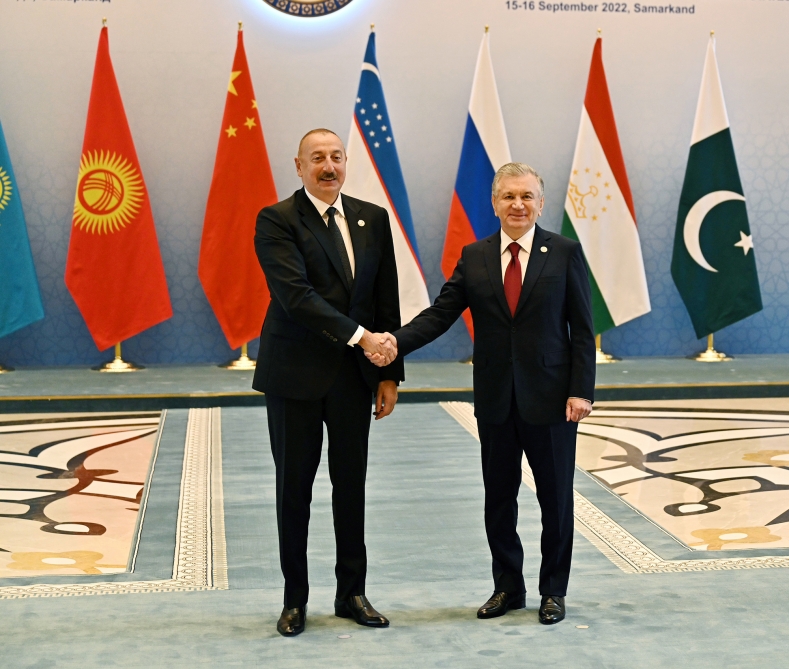 A summit of the Shanghai Cooperation Organization (SCO) member states has been held in Samarkand, according to Azerbaijan in Focus, reporting AzerTac.

The heads of state and government then posed together for a group photo.

The expanded meeting of the Summit then was held.

Chair of the Shanghai Cooperation Organization, President of Uzbekistan Shavkat Mirziyoyev greeted the heads of state and government who attended the Summit and made a speech.

The President of Azerbaijan made a speech at the event.

I would like to thank the President of Uzbekistan, Shavkat Miromonovich Mirziyoyev for inviting me to the Shanghai Cooperation Organization summit.

A few months ago, I had a very successful state visit to Uzbekistan and now I am glad to be here, in brotherly Uzbekistan, the ancient and beautiful city of Samarkand.

Under the leadership of my brother Shavkat Mirziyoyev, Uzbekistan has gone through a path of rapid development and successful reforms in recent years.

I would like to inform colleagues about the transit, transport and logistics capabilities of Azerbaijan.

Azerbaijan has made significant contributions to the launch of regional connectivity projects such as East-West and North-South transportation corridors.

Currently, Baku International Trade Seaport has a handling capacity of 15 million tons of cargo per year, which can be increased up to 25 million tons.

In the first 7 months of 2022, the transit through Azerbaijan increased by nearly 50 %.

Azerbaijan has the largest civilian cargo fleet in the Caspian Sea with 52 ships. The Baku Shipyard can produce all types of ships.

Azerbaijan has one of the largest civilian air cargo fleets in our region with 18 planes.

By the end of 2024, the number of international airports in Azerbaijan will increase from today’s 7 to 9.

The resolution of the Karabakh conflict at the end of 2020 created new opportunities for the development of transport connectivity projects in our region. Once the Zangazur corridor is opened, it will further increase the transportation capabilities of the countries from the region and will be beneficial to all countries along the route.

Azerbaijan presented five basic principles for the peace agreement to Armenia based on the mutual recognition of each other’s sovereignty and territorial integrity. Now, we need without preconditions and artificial delays to start the work on the draft peace treaty.

But unfortunately, on 13 September this year Armenia perpetrated large-scale military provocation at the state border with Azerbaijan. Azerbaijani Armed Forces resolutely repulsed the Armenian provocation. This provocation is a huge blow to the normalization process between two countries. All responsibility for this lies with the military-political leadership of Armenia.

Since 2019 Azerbaijan is chairing the Non-Aligned Movement, the second largest international institution after the UN, which unites 120 countries. Our chairmanship was unanimously prolonged for one more year until 2023 and this is a sign of respect, confidence and trust in our country. Azerbaijan will continue to build its activities based on international law, justice and global security.

Expressing his gratitude to President Ilham Aliyev, President of Uzbekistan Shavkat Mirziyoyev said: Thank you, Ilham Heydar oglu, for a meaningful speech. As you mentioned, first of all, the development of regional cooperation with Azerbaijan in the transport and communications and economic and trade areas is of particular interest to us.

Other heads of state and government also addressed the Summit.

The organizational issues then were reviewed, the decisions were made and the Samarkand Declaration of the Shanghai Cooperation Organization was signed.

The Shanghai Cooperation Organization is an intergovernmental organization founded in Shanghai on 15 June 2001.

Since its inception in 2001, the SCO has mainly focused on regional security issues, its fight against regional terrorism, ethnic separatism and religious extremism. To date, the SCO’s priorities also include regional development.

After 21 years, the organization has become not only a strong pillar of global peace and development but also a major force for international equity and justice.

The SCO has been an observer in the UN General Assembly since 2005. In April 2010, the UN and SCO Secretariats signed a Joint Declaration on Cooperation.

The SCO Secretariat, based in Beijing, is the main permanent executive body of the SCO. The Secretariat is headed by the Secretary-General Zhang Ming.

The SCO Secretariat coordinates the activity of the SCO and provides informational, analytical, legal, organizational and technical support.

The SCO calls for observing the purposes and principles of the United Nations Charter and the principles of extensive consultation, joint contribution and shared benefits, providing a new platform and model for multilateral cooperation to improve global governance.

Uzbekistan is the current chair of SCO. President of Azerbaijan Ilham Aliyev attends the SCO Summit in Samarkand as a guest of honor at the invitation of Uzbek President Shavkat Mirziyoyev.