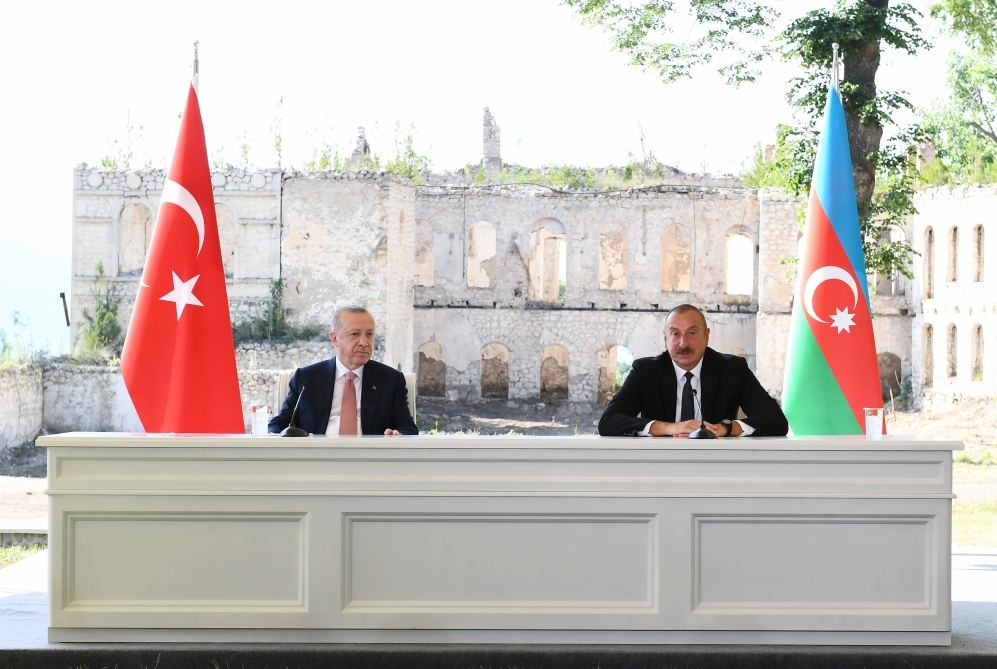 Turkish President Recep Tayyip Erdogan paid a historic visit to the liberated city of Shusha and signed a historical declaration in the heart of the Nagorno-Karabakh region – Shusha on June 15, according to Azerbaijan in Focus, reporting Trend News.

The Shusha Declaration on Allied Relations was signed between the two fraternal and friendly countries on a very important date for Azerbaijan – June 15 – the National Salvation Day, 100 years after the Treaty of Kars.

The Shusha Declaration on Allied Relations is of exceptional political and historical significance.

The Azerbaijani-Turkish relations, characterised by the statements of the national leader of the Azerbaijani people Heydar Aliyev “One nation, two states” and founder of the Republic of Turkey Mustafa Kemal Ataturk “The joy of Azerbaijan is our joy, its sorrow is our sorrow”, were brought to the highest level and entered into a new stage.

This document, being the logical result of the mutual coordination of the activity of the two fraternal countries to protect common interests, unite opportunities, as well as in regional and international strategic issues of mutual interest, will strengthen the international and regional role of Azerbaijan and Turkey and increase their authority.

The joint initiatives of the two countries to strengthen stability and security, restore all economic and transport ties, as well as normalise relations between the regional countries and ensure sustainable peace in the Caucasus region is the best example demonstrating the need for even bigger efforts in this sphere.

At the same time, the activity of the Turkish-Russian joint centre in the Nagorno-Karabakh region attracts attention as an effective mechanism for restoring peace in the region.

The Shusha Declaration on Allied Relations, guided by the principles of independence, sovereignty, territorial integrity, inviolability of internationally recognised borders, non-interference in the internal affairs of countries, is important from the point of view of strengthening political and legal mechanisms for establishing allied relations from both countries pursuing the independent foreign policy aimed at ensuring and protection of national interests.

The document also pays special attention to the promotion of coordinated and joint actions in the political and military spheres, as well as in the field of security from the point of view of common national interests.

In case of a threat or aggression from a third state or states against the independence, sovereignty, territorial integrity, inviolability or security of the internationally recognised borders of any side, it is envisaged to hold joint consultations and come up with initiatives in accordance with the purposes and principles of the UN Charter to eliminate this threat or aggression, render the necessary assistance to each other in accordance with the UN Charter, organise the coordinated activity of the security forces and command structures of the armed forces.

The Shusha Declaration emphasises joint efforts to restructure and modernise the armed forces in accordance with modern requirements, implement the measures aimed at strengthening defence capability and military security, improve the skills of joint activity of the armed forces of the two countries, closely cooperate in using weapons and ammunition based on modern technologies and ensure the appropriate activity of the competent structures and departments for this purpose.

As for the trade and economic relations, the document reflects such topical issues as the intensification of efforts to diversify national economies and export, creation of mechanisms for organising the free movement of goods, continue the coordinated efforts to effectively use and further develop the Southern Gas Corridor, further develop transit and transport potential on the Azerbaijani-Turkish sections of international transport corridors by using the technologies of intelligent transport systems, open the Zangezur corridor connecting Azerbaijan and Turkey, restore transport and communication ties in the region, promote the development of international transport corridors.

The document envisages the further development of cooperation between the Azerbaijani and Turkish diasporas, the process of taking joint steps on common problems, demonstration of strong solidarity, coordination of the activity of the diaspora and mutual support in conveying the historical truth in connection with the protection of national interests to the international community.

Taking into account the fact that Armenia’s unfounded claims to Turkey, the attempts to falsify history and its politicisation by distorting historical facts threaten peace and stability in the region, it is important to open archives in connection with the events of 1915 and in every possible way to support the efforts of historians to conduct research on this topic.

Within the Azerbaijani-Turkish media platform, cooperation in the field of information, communication and public diplomacy between the relevant structures of the two countries must be strengthened and activities carried out within the Turkic Council and related institutions must be promoted to further strengthen the Turkic solidarity.

The Azerbaijani-Turkish relations have reached their highest point. The fact that the peoples of the two countries have the same origin, language, religion, culture and many other spheres has always brought two countries together and the peoples supported each other on happy and sad days.

The high level of relations between Azerbaijan and Turkey makes an important contribution to the progress and stability of the region as a whole. During the 44-day second Armenia-Azerbaijan Nagorno-Karabakh war, the world again witnessed this. From the first days of the war, fraternal Turkey rendered Azerbaijan political and moral support.

Turkish President Recep Tayyip Erdogan made clear and unequivocal statements that Azerbaijan is not alone in this war and that Turkey will always support Azerbaijan. This strengthened Azerbaijan’s strength and played an important role in the victory in the Nagorno-Karabakh region.

In particular, the fact that President Erdogan stood side by side with President Aliyev at the Victory Parade on Freedom Square in Baku once again demonstrated to the world the unity of two countries and the brotherhood of Azerbaijani and Turkish peoples.