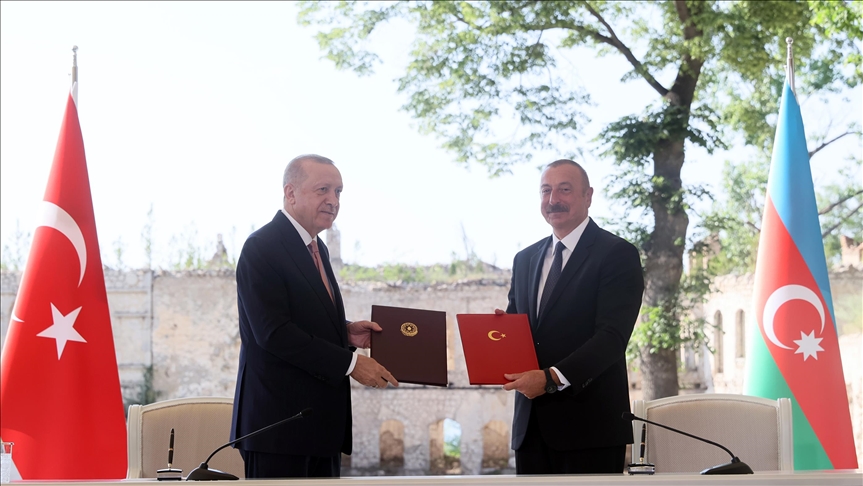 The declaration, described as “a roadmap for the future of our relations” by President Erdogan, is essentially a continuation of the two states’ efforts to maintain their bilateral activities following the Second Karabakh War

While Recep Tayyip Erdogan’s visit to Shusha, which was recently liberated from Armenian occupation, as Turkey’s president reflected Turkey’s strong and determined support for the independence and territorial integrity of Azerbaijan, the signing of the “Shusha Declaration on the Alliance Relations Between the Republic of Turkey and the Republic of Azerbaijan” with Azerbaijani President Ilham Aliyev has taken the relations between the two countries to a new level.

The declaration lays out a roadmap for the future of the relations between the two brotherly states in a variety of fields, from energy, transportation, defense industry technologies and the military to economic and humanitarian relations.

In interstate relations, the signing of declarations has a considerable impact on alliances.

A declaration signed between two brotherly states, on the other hand, makes it even more important for the people of the two countries.

Through such declarations, alliances can be established not only between states, but also between peoples.

In the case of the Shusha Declaration, it is clear that a vast majority of the peoples of the two states acknowledge and respect this alliance, and even demand and approve it, further cementing the alliance relationship between them.

The signing of this declaration on the 100th anniversary of the Treaty of Kars, which is actually referenced in the declaration, is particularly notable.

The Shusha Declaration is compared to the 1921 Treaty of Kars, which is a seminal agreement in the Azerbaijan-Turkey relations.

Another aspect that contributes to the significance of this declaration is that it was signed in Shusha, an important city for the Turkic world and Turkey-Azerbaijan relations, as well as for Azerbaijan.

Shusha is strategically critical, and whoever controls Shusha has control over Karabakh.

The “historical significance” of the meeting between the two leaders being held “in the city of Shusha, the ancient cultural cradle of Azerbaijan and the Turkic world as a whole” is emphasized in the declaration’s preamble, as is Turkey’s announcement that it will open a consulate in Shusha, demonstrating the importance Ankara attaches to this region.

President Ilham Aliyev drew attention to the word “alliance”, which, he said, helps to better appreciate the importance of this declaration.

In international relations, an “alliance” is a formal defense agreement struck between two or more states in case of war.

Such agreements are defensive in nature and impose a responsibility on the allied states to join forces with each other when one of them is attacked by a third state or a coalition.

This issue is explained in the Shusha Declaration as follows:

“In the event that the independence, sovereignty, territorial integrity, national security, or the immunity of internationally-recognized borders of either one of the sides is threatened or attacked according to it by a third state or group of states, the two sides will have joint meetings and take initiatives that are in line with the United Nations Charter in order to prevent this threat or attack, and they will provide each other with the necessary aid in line with the UN Charter.

The scope and form of this aid will be determined at promptly summoned meetings, decisions will be made to meet defense needs so that joint measures can be duly taken, and the sides will ensure that the operational and administrative units of the Armed Forces will work in a coordinated manner.”

President Aliyev emphasized the significance of this declaration by saying, “Without Turkey’s support, there would be many who would want to intervene” in regard to the 44-day War for the Motherland.

Therefore, the Shusha Declaration obligates both states to support each other militarily.

On the other hand, the Shusha Declaration explicitly states that this alliance was formed for defensive purposes, not to target any third party.

The two allies state that their military and political cooperation, which is in their mutual interests, is not against any third country.

The parties agreed to hold joint meetings at the level of security councils to discuss regional and global issues of national importance, indicating that their relationship is moving to a new level.

Since 2007, particularly issues of regional and global importance had been discussed in the High-Level Military Council, and these councils were chaired by their deputy defense ministers.

This has since been upgraded to joint security council meetings presided over by the presidents themselves.

Cooperation will increase in all fields

One of the most notable aspects of the two states’ bilateral relations is the increase in cooperation in the field of defense industry technologies.

In this regard, President Erdogan stated, “A factory will be built for the sharing of technology with and manufacturing products jointly in Azerbaijan”.

In other words, with the realization of this project, Azerbaijan, which is a state that imports military technology, will be transformed into a production center.

President Aliyev’s previous statement that “Azerbaijan will create a smaller version of the Turkish army” became official with the signing of the declaration.

The parties have agreed to continue working together to restructure and modernize their armed forces to meet current demands.

Moreover, they have agreed to conduct joint military drills with other friendly countries, adding a new dimension to their military cooperation.

The transportation corridor is one of the important issues that the two countries keep on their agenda in terms of regional cooperation.

The completion of the Baku-Tbilisi-Kars railway, constructed through bilateral cooperation, has opened up new opportunities for regional cooperation.

The Middle Corridor, which connects Central Asia, Azerbaijan, and Turkey and is supported by the Turkic Council, is also mentioned in the Shusha Declaration.

In addition, after the Second Karabakh War, a possibility for a new corridor between the two brotherly countries arose.

The emphasis laid on the importance of the Zangezur Corridor, which will connect Azerbaijan to Turkey, further illustrates that these policies are indeed intended to achieve long-term goals.

As for the economic field, after implementing a preferential trade agreement on March 1, the allies have taken another step towards a free trade agreement with this declaration.

In this regard, steps will be taken to put in place mechanisms required to ensure the free movement of Turkish and Azerbaijani goods.

The free movement of citizens between the two countries using only their identity cards has already begun (as of April 1).

Also as part of this declaration, the two countries will mutually ease the requirements and facilitate the processes for citizens who wish to reside in the other country.

Azerbaijan and Turkey, the founding countries and the locomotives of the Turkic Council, particularly felt the need to emphasize in their declaration of alliance that they deeply value cooperation with the entire Turkic world.

The fact that the Turkic Council is given precedence over a number of other organizations and international platforms in the region demonstrates the significance of the Council regarding the regional policies of the two states.

Azerbaijan and Turkey managed to forge a new geopolitical reality after the Second Karabakh War.

They wish to carry this geopolitical reality into the future by supporting it with new proposals for cooperation.

Since the energy and transportation projects carried out in the past in the region by both of these states have shifted the geopolitical balance in their favor, they have experience in this field.

Both states, which refrain from armament and regional conflicts, believe that cooperation and project-oriented initiatives should be key elements in regional power projections.

For this reason, the declaration of alliance also features regional cooperation proposals.

The parties emphasized that Turkey’s contribution to the activities of the Turkish-Russian Joint Center in the liberated territories of Azerbaijan played an important role in establishing peace, stability and prosperity in the region, reaffirming the importance of cooperation with Russia in this regard.

The importance that the two allies attach to regional cooperation is easily discernible both in the statements of their leaders and the content of this declaration.

President Erdogan has in this regard recalled the proposal for a regional six-country cooperation platform –a joint proposal of Turkey and Azerbaijan–, and even gave positive messages regarding the establishment of diplomatic relations and the opening of borders with Armenia, should it decide to act constructively.

Another statement in the declaration that “the parties will maintain their efforts to consolidate stability and security in the Caucasus region, restore all ties in the fields of economy and transportation, as well as normalize the relations between regional states and ensure long-term peace in the region” also emphasizes, once again, that the parties are open to regional cooperation.

In fact, this declaration, described as “a roadmap for the future of our relations” by President Erdogan, is essentially a continuation of the two states’ efforts to maintain their bilateral activities following the Second Karabakh War, especially by combining their resources and capabilities in every field.

Examining the previous declarations signed between the parties prior to the Shusha Declaration, we can conclude that the goals set by them have since been met.

In this sense, we can likewise anticipate that the goals outlined in the Shusha Declaration will also be realized over time.

The allied states have thus strongly emphasized that they are open to regional cooperation, but at the same time made it clear that they will not let any threats go unanswered, either.

They have also declared that they will work together to increase regional efficiency.

Translated from Turkish by Can Atalay.

The writer works at the Baku-based think-tank Center of Analysis of International Relations (AIR), heading a department that specializes on Azerbaijan’s Foreign Policy, Geopolitics in South Caucasus, Internal and External Policy of Turkey, and Azerbaijan-Turkey relations.

This article originally appeared in Anadolu Agency on 18 June 2021.