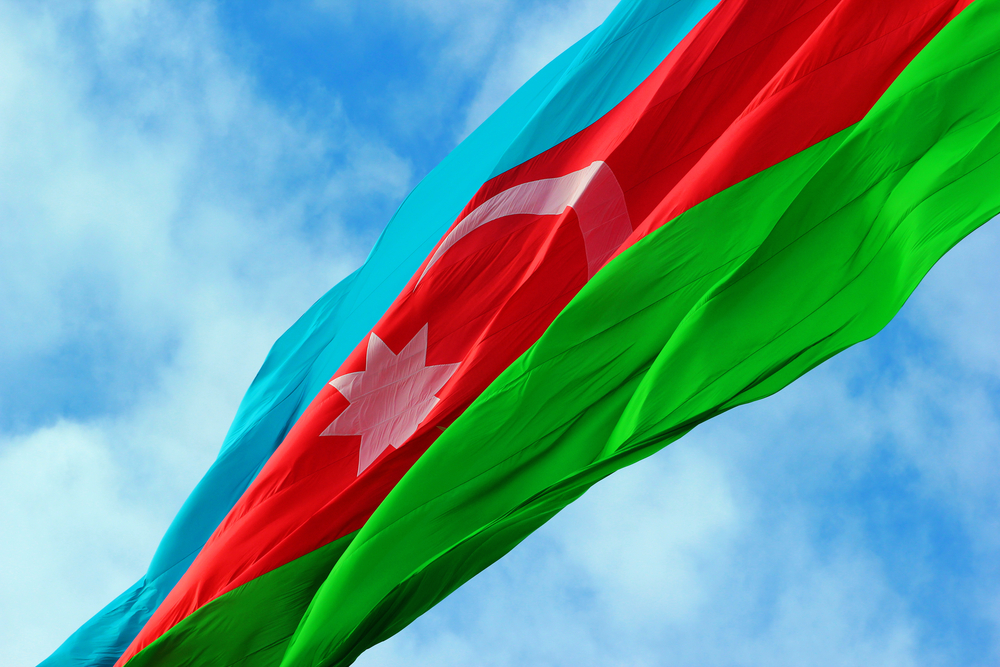 The word bayrag (flag) is Turkic in origin. It is mentioned in the 11th century Divani-lugat-it-turk (Dictionary of the Turkish Language) by Mahmud Kashkarli, both giving the modern meaning and in literal meanings of the word bayrak – batrak. The word bayrag has the same meaning in most ancient and modern Turkic languages. Batrak and bayrak originated from the verb ‘to stick in’ or ‘to thrust’ (batir – batirmaq, sanjmag). Alongside bayrag, other words were also used to mean flag – tugra, bunjug, sanjag – which also evolved from the verb meaning to thrust (sanjmag).

Archaeological finds in Azerbaijan confirm that flags were used as standards during the Bronze Age (4th–2nd millennium B.C.). Circular bronze boards and bronze standards in other shapes, decorated with various geometrical figures, such as a horned deer, an eight-pointed star and a radiant sun, were found during archaeological excavations undertaken in Sheki and Shamkir; they were probably the symbols of the head of a tribe or ruling authority. Most of the archaeologically-discovered standards carried images of horned animals. These are also encountered in Assyrian reliefs of the 8–7 centuries B.C., depicting fortresses in Manna. Standards in these shapes probably served as talismans. In modern-day Azerbaijan, the horns of goats and rams, animal skulls (dogs, horses, deer) are still fastened above gates and doors and used as symbols or talismans to protect against ‘the evil eye’ and malevolent deeds.

The Azerbaijani flag has an ancient history. The Caucasian Albanian historian, Musa Kalankatli devoted a section in his History of Albania to the images of flags. The bodies of these flags were shaped as dragons or birds and fabricated from silk. Their shafts were made from silver, and depicted the heads of mythical animals. Similar flags were widespread in Europe and other Eastern countries in the Middle Ages.

Flags had a military significance. They were particularly protected during battles, and their fall or capture by the enemy meant defeat. In The Book of Dede Gorgud, Salur Gazan, who succeeded in taking vengeance for an attack by his enemies, “cut the sanjag (flag) of the kaffir with his tugh (sword) and threw it to the ground”. There are the images of a lion and a human face in the shape of the Sun (Shiri-Khurshid) on the background of the flag of the Safavids’ state, which was especially prominent during the history of Azerbaijani statehood, thereby demonstrating that the state was based on national traditions and ancient history.

The Azerbaijani khanates also had special flags. These flags were removed from Azerbaijan during the Russian Tsarist occupation in the early 19th century and were later passed to the Caucasian Military Museum in Tbilisi.

In April 1919, during the period of the Azerbaijan Democratic Republic (ADR), the question of returning those flags that reflected the history of Azerbaijani statehood to their homeland was raised. General Samad bey Mehmandarov, Minister of Defence, instructed Lieutenant Colonel Mammadbey Aliyev, the Azerbaijan attaché in Georgia, to obtain the Georgian government’s consent to return the Azerbaijani flags and other symbols of state that were held in the Caucasian Military Museum to Baku. This question was raised again during the First All-Azerbaijani Congress of Local History (September 1924), following the establishment of the Azerbaijan State Museum in June 1920. In the same year, the Azerbaijani State Museum of History succeeded in obtaining the flags of the khanates, Azerbaijani generals who had served in the Tsarist Russian army and of certain Muslim regiments.

The flags of the Azerbaijani khanates were triangular, quadrangular, and pentagonal in shape, made from the finest eastern fabric and decorated with various ornaments and inscriptions. They were fringed with silk thread of different colours, in addition to gold and silver thread. The shafts were cylindrical, made from light wood and painted. Their tops were adorned with decorated metal caps and tassels fabricated from thread gold and silver thread and other colours.

The flag of the Ganja khanate was rectangular in shape and made from a specially woven fabric 127 cm long and 174 cm wide. The flag was sewn manually from a crimson and green moiré fabric. At the top of the flag there were three bunches of gold-coloured flowers and a scarlet oblong, with two golden oblongs on the right. The word Allah was written in Arabic inside the scarlet oblong and surrounded by gold lilies.

The rectangular flag of the Baku khanate was 220 cm long and 127 cm wide and stitched manually from four pieces of light crimson and one piece of light moiré fabric. A piece of green fabric (31 cm wide) placed lengthwise and fastened via the red satin border (6 cm wide). On the first stripe, inside two light and dark butas (‘paisley’ pattern), were ornaments of six-sided flowers similar to lilies, placed side by side and top to tail, together with pointed, undulating, leaf-like patterns.

The second stripe was wider. On this, there were two crescents in light and dark green and their ends were joined. Six- and eight-pointed flowers were embroidered inside the circle created by the joining of the crescents. The remainder of the flag was also embroidered with various ornaments.

In general, the flags of the khanates differ in size, style and ornamentation. Silk thread in various colours was generally used.

Slightly later, following the Turkmenchay Treaty (1828) between the Russian and Persian Empires, which resulted in the division of Azerbaijani lands, six Muslim regiments were formed from the populations of Muslim provinces in the South Caucasus, including Azerbaijanis and the Kengerli cavalry unit. The battle flags of the regiments, distinctive in their patterns and political symbolism, were made from silk fabric of various colours with the Russian double-headed eagle depicted on them. There were inscriptions in Arabic on the flags.

The flags of the Muslim cavalry regiments were also noted for their fabric, design and decoration. The flags of the first, second, third, fourth etc. sotnias (squadrons) were made from fine taffeta. The Russian expression ‘Transcaucasian Regiment: first, second, third, fourth and etc. sotnias’ was written in patchwork, using large capital Cyrillic letters.

Attractive religious flags were made in the 19th–early 20th centuries for use during religious ceremonies.

Birth of the modern state flag

In July 1918, during the ADR, the first government resolution on the state flag was issued. A white crescent and eight-pointed star were depicted on the state flag, which was basically red. This flag was only slightly different from that of the Ottoman Empire. This was misunderstood at the time, and led some to consider Azerbaijan to be part of Turkey. Consequently, the ADR government decided to change the image. The Cabinet’s resolution read: “A flag consisting of the colours green, red and blue with a white crescent and eight-pointed star is to be considered the National Flag”. Thus, on 9 November 1918, the three-colour flag of Azerbaijan was accepted as the State Flag.

The Azerbaijani flag comprised three stripes of equal width. The upper stripe was blue, the middle stripe was red and the lower stripe was green. In the middle of the red stripe on both sides of the flag was depicted a white crescent and eight-pointed star. The ratio of the flag was 1:2. The blue colour expressed Turkism, the red colour meant modernity and the green colour stood for Islam.

The crescent has been the emblem of Turks from ancient times. In Azerbaijani mythology, the moon is a male symbol and the star is a female symbol. The moon was also the emblem of Caucasian Albania. The priests of the Moon temple were regarded as the most holy men in Caucasian Albania after the ruler. There are some explanations for the combination of the crescent and the eight-pointed star. According to the ADR, it was an allusion to equality of rights for men and women. It was also seen as a symbol of happiness.

Military divisions participating in World War II, including Azerbaijani divisions, military units, regiments, sections and fleets, all had their own flags.

Despite all the prohibitions of the Soviet totalitarian regime, Azerbaijanis never forgot the three-colour flag.

In 1956, Jahid Hilaloglu raised the three-colour flag on Maiden Tower as a protest against the Soviet regime. He was imprisoned for four years for this action and his accomplice was placed in a special clinic for mental patients.

The three-colour flag was waved again as a symbol of independence during the national liberation movement that began in 1988.

The State Flag of the Azerbaijan Democratic Republic

“A flag, once raised, will never fall”

The flag of Azerbaijan is the state’s emblem and its moral and political passport.

Author Mais Amrahov is a Professor in the Department of History of the Turkic and Eastern Europe Nations and History Teaching Methodology at the Azerbaijan State University of Teacher Training, and holds a PhD in History. He is the author of monographs and articles devoted to World War II and the modern history of Azerbaijan.