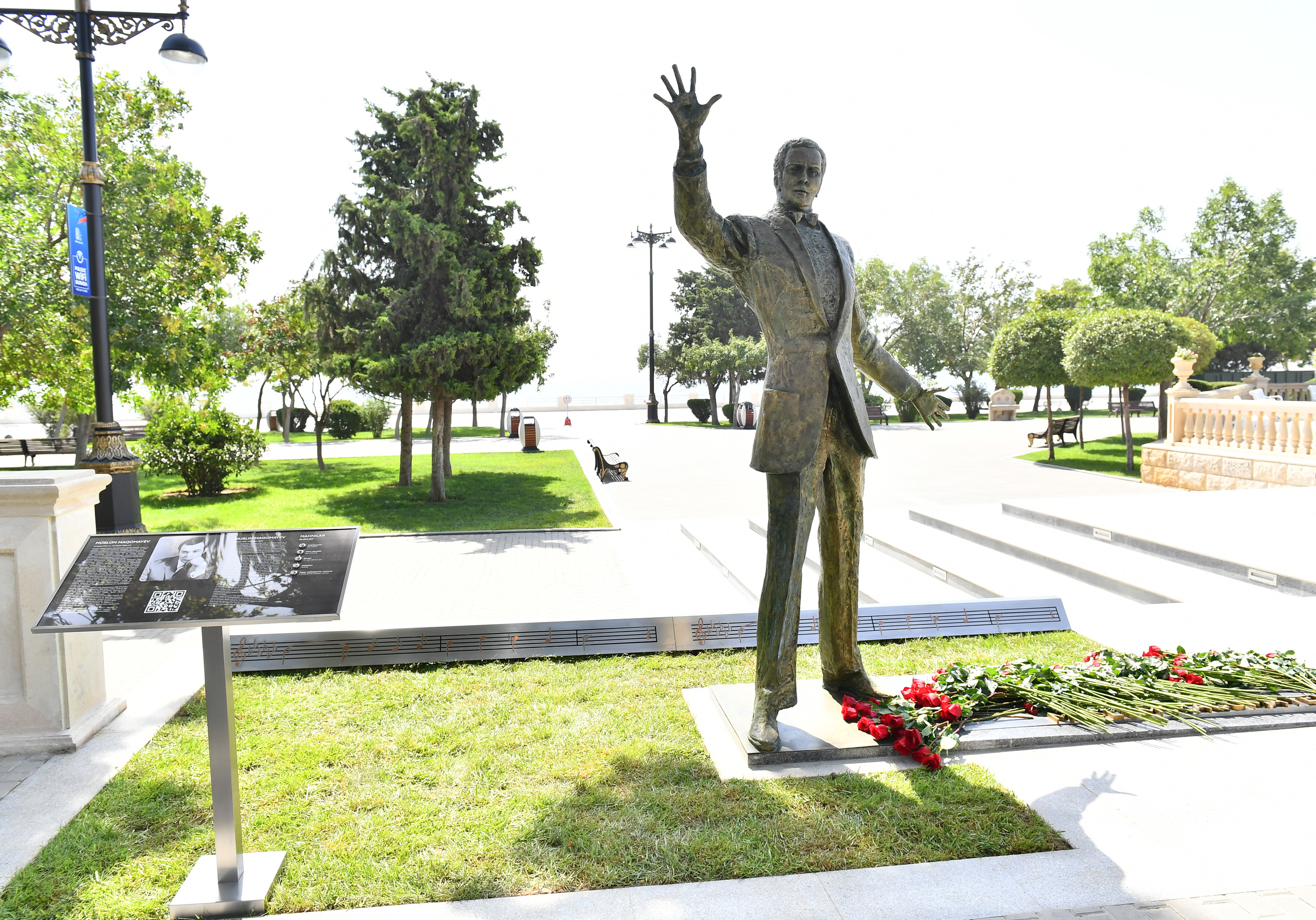 A statue of world-renowned singer Muslum Magomayev has been unveiled at the Baku Seaside National Park, according to Azerbaijan in Focus, reporting AzerTac.

The head of state addressed the event.

– Dear friends, today is the 80th anniversary of the birth of Muslum Magomayev, the prominent son of the Azerbaijani people. Today, a statue of Muslum Magomayev is being unveiled in one of the most beautiful places in Baku. We are gathered for this ceremony. Those who knew Muslum and still love him will be unveiling this beautiful statue together.

The people of Azerbaijan are rightfully proud of Muslum Magomayev because he was both a great singer and a great composer. He was unmatched on the Soviet stage. In fact, the songs performed by Muslum Magomayev make us all emotional even today. All of us have our own memories of Muslum, including myself. I have known Muslum and Tamara since I was a teenager. They were very dear guests of our house. I have many wonderful memories. Of course, every year in August, we welcomed Muslum and Tamara to our home and celebrated Muslum’s birthday at our place.

Muslum was someone who was very attached to his native country. Although he spent most of his career in Moscow and on tour to other cities of the Soviet Union, he came to Baku several times a year, gave concerts and was always in touch with his friends. In particular, we had a number of meetings and very cordial relations both in Moscow and Baku.

As you may know, when Muslum Magomayev’s father died heroically in the last days of World War II, Muslum was under three years of age. He grew up in the family of his uncle Jamaladdin. Of course, my father Heydar Aliyev also paid special attention to his activities when he gained all-Union fame at a young age. I can actually say that my father treated him with fatherly care. Because he knew him both as a great singer and as a very nice person. Each of us knew Muslum as a great performer, singer, composer, and most importantly, a wonderful person, a dignified person and a very reliable friend.

Although there was a significant age difference between us, we never felt it because we were friends for many years. I specifically remember the last meeting Mehriban and I had at Muslum’s and Tamara’s house in Moscow. Muslum’s health was not so good anymore, he was having problems, but despite that, he welcomed us very sincerely. We spent several hours in their house and had a very sincere conversation, recalled the past, remembered my father, my late mother – we recalled those great days, and Mehriban and I got emotional. As you know, Muslum had certain problems with his legs in his last years. However, there was such a friendly atmosphere that Muslum, who hadn’t been going outside for years, came out to see us off. Little did we know that this was going to be our last meeting.

Both Tamara and Muslum were great performers and world-famous singers. They were so attached to each other that the story of their love and friendship is a legend. They met in Baku, and my late father always remembered those days.

Of course, talking about Muslum today is both easy and difficult. Because he was such a great personality, both as an artist and as a person. One can talk about him for hours. At the same time, while pointing to all of his talents, those who knew him closely, those who loved him, first of all, remember him as a person, of course. I am sure that you feel the same way.

Muslum’s attachment to his native land is also reflected through his works. The songs he composed about Azerbaijan, the Land of Fire and the Caspian Sea are both magnificent and filled with love of the Motherland. Those songs live on and will live forever. The last song Muslum composed is very sad. We heard this song at the farewell ceremony for Muslum organized at the Philharmonic Hall in Baku. We were very moved by the song because we didn’t know that this song had been written and composed by Muslum himself. The name of that song is “Goodbye, Baku”. He was aware that he would not be able to come to Baku, to his beloved city, to walk along these streets, to meet his friends in Baku. It is hard to imagine that a person who loved life the way he did and who enjoyed being around friends would compose this farewell song and say goodbye to us, to the city. At the same time, it shows that even when his health was not so good, his talent and capacity of an outstanding artist were still very much in place.

“Goodbye, Baku”, of course, is the song through which Muslum expressed his feelings. This having been said, it is impossible for him to say “Goodbye, Baku” because Muslum is always with us. He is in Baku today, his beautiful statue will be unveiled today and Baku will never forget him. The people of Azerbaijan will never forget him. His memory will live on in the hearts of those who knew him. His unique voice and his art will live forever.

I want to congratulate you all on this remarkable occasion. First of all, I want to congratulate dear Tamara, Muslum’s friends and myself on having erected this statue. I also think that we have chosen the most suitable place for this statue. The boulevard is the heart of Baku, the center of Baku, the crown jewel of Baku, and the souls of our brilliant artists, including Muslum, are roaming the boulevard. Therefore, our citizens approaching this statue will always say “Hello, Muslum”, and Muslum will live forever. Thank you.

President Ilham Aliyev then unveiled the statue of Muslum Magomayev.

The author of the statue erected under President Ilham Aliyev’s Order is People’s Artist, sculptor Omar Eldarov. The height of the bronze statue is 2 meters.