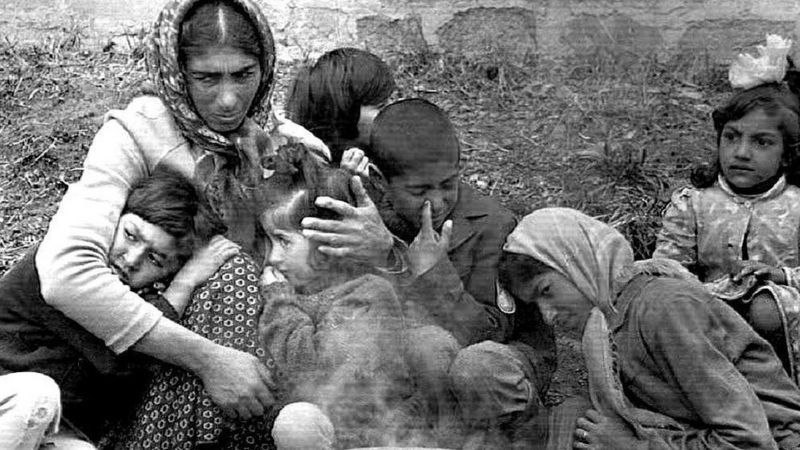 Sumgayit Is Not a Cause; It Is a Consequence

By creating a state, on the land of Azerbaijanis, the Armenians launched the political project “Armenia without the Turks” and the expansion of their living space.

On December 17, at the annual press conference, Russian President Vladimir Putin stated that the events in Sumgayit in February 1988 were the cause of the conflict between Azerbaijan and Armenia.

“Turkey’s position is based on the fact that Turkey defended, as they believe, the just cause of Azerbaijan. Namely, the return of territories. From an international point of view, these territories are an integral part of the Republic of Azerbaijan. The situation is more complicated than just normative postulates. The roots are in the ethnic conflict that began in Sumgayit and spread further. Each side has its own truth. And the Armenians took up arms in their time to protect their lives and dignity,” he said.

This is not the first such statement by a Russian leader. He made exactly the same statement on October 29 during the final plenary session of the 17th annual meeting of the Valdai International Discussion Club, held via videoconference, and touched upon the topic of the Armenian-Azerbaijani conflict.

“… the conflict began not just as an interstate conflict and a struggle for territories; it began as an ethnic confrontation. It is also, unfortunately, a fact when in Sumgayit, and then in Nagorno-Karabakh, cruel crimes were committed against the Armenian people. We must take all this into account as a whole,” the Russian president said.

A week later, during the plenary session of the VTB Capital investment forum “Russia Calling!”, Vladimir Putin again touched upon the topic of Nagorno-Karabakh.

“Azerbaijan says that these 7 regions have nothing to do with either the ethnic conflict or Armenia. These are primordially Azerbaijani territories. Azerbaijan says, “We have the right to return these territories and deal with Nagorno-Karabakh.” You understand – each has its own truth. There are no simple solutions here, because the knot is very complex,” said the head Vladimir Putin.

Is Putin sincere in his perception of the conflict or is he dissembling? Various assumptions can be made as to why Vladimir Putin holds this point of view. Who knows, maybe he was informed like that, or he said it, guided by some political considerations. However, the fact is that the conflict between Armenia and Azerbaijan is not a consequence of the events in Sumgayit, but quite the opposite – the events in Sumgayit are nothing more than a consequence of the territorial conflict. More precisely, the territorial claims of Armenia against Azerbaijan.

To be convinced of this, it is necessary to trace the chronology of the events that led to the Sumgayit events and have to start what is called “from the creation of the world”.

Before the occupation of the Erivan Khanate by Russia, Muslims (Azerbaijanis, Kurds, etc.) accounted for 80% of the population (87 thousand people), the remaining 20% were Christians (Armenians).

After the occupation in 1828, Armenians migrated to this territory from the Qajar State (Persia) and Turkey. At the same time, many Muslims began to leave this territory en masse. Similar migration processes on a smaller scale continued until the end of the 19th century.

During this period, in the Erivan province of the Russian Empire (which also included the entire territory of the present-day Nakhchivan Autonomous Republic and the Ygdir region of Turkey); about 37.5% of the population were “Aderbeydzhan Tatars” (Azerbaijanis). They prevailed in number in four of the seven counties of the province, including the city of Erivan, where they constituted 49% of the population (compared to 48% of Armenians).

The beginning of the 20th century was marked by the mass expulsion of Azerbaijanis from the territory of present-day Armenia and Nagorno-Karabakh. With the support and patronage of the Russian state, violence and atrocities against the civilian population were especially widespread in the Zangezur, Iravan, Nakhchivan, Ordubad, Gazakh, Karabakh and other regions of Azerbaijan. Hundreds of villages were burned; most of the indigenous population was ruthlessly destroyed.

During the First World War, there were 150 thousand Armenians as part of the Russian army, striving to capture Eastern Anatolia (Anadolu). In addition, four Armenian squads, which included about 10 thousand volunteers, passing through the territory of South Azerbaijan (the provinces of Khoy, Urmia, Salmas) and the Kars region, joined the Russian troops. Along the way, Armenian armed formations destroyed all Azerbaijani and Turkish villages, ruthlessly destroying the population.

The Armenian formations retreating under the attacks of the Turkish army under the command of Andranik Ozanyan, Amazasp Srvantstian, Dro (Drastamat Kanayan), Garegin Nzhdeh committed genocide of the Muslim population, first in the Turkish provinces of Erzurum and Kars, and then in the Erivan province and Zangezur. The Armenians who participated in the massacres during the Russian occupation of Eastern Anatolia, having also joined the Armenian formations, began to flock to the South Caucasus. At that time, out of 350 thousand Armenians who moved from Turkey, most of them settled in the territory of the Erivan province, thereby further aggravating the situation of Azerbaijanis living there.

Armenian military formations destroyed 198 villages only in the districts of the Erivan province, of which: in the Yerevan district – 32, in Echmiadzin – 84, in Novo-Bayazet – 7, in Surmalinsky – 75. According to approximate data, over 135 thousand Azerbaijanis who lived in these counties were massacred.

In the Zangezur district, about 50,000 Muslims were expelled. All of them fled to the neighboring Jabrayil and Jevanshir districts. Because of these attacks, more than 100 villages were destroyed and about 10,000 people were killed.

In the city of Baku and the Baku province, under the leadership of Stepan Shaumyan, appointed by the leader of the Russian Bolsheviks Vladimir Lenin as extraordinary commissar of the Caucasus, the massacre of Azerbaijanis was organized, in which 6 thousand soldiers of the Baku Soviet and a detachment of 3-4 thousand of the Dashnaktsutyun party took part. From 24 to 31 March, over 12 thousand Azerbaijanis were killed in Baku alone. In addition, the Armenians destroyed 75 villages of the Shemakha district, 122 villages of the Quba district, 115 villages in Zangezur; 20 thousand people were killed. Massacres also took place in South Azerbaijan, where 150 thousand Azerbaijanis were killed.

In Karabakh, an anti-Azerbaijani armed rebellion, prepared by emissaries from Armenia, took place, during which Armenian detachments attacked Azerbaijani garrisons in Khankendi, Shusha, Askeran, Terter, etc. The rebellion was suppressed. After several days of fighting, Azerbaijani units managed to regain control over Shusha, but in the countryside of Nagorno-Karabakh, battles continued until the Sovietization of Azerbaijan on April 28, 1920.

The leader of the Dashnaks Garegin Nzhdeh captured Zangezur and expelled the remnants of the Azerbaijani population from there.

In 1947, the first secretary of the Communist Party of the Armenian SSR, Grigory Arutinov, achieved the adoption by the Council of Ministers of the USSR of a resolution “On the resettlement of collective farmers and other Azerbaijani population from the Armenian SSR to the Kura-Araks lowland of the Azerbaijan SSR”. Because of which up to 100 thousand Azerbaijanis were deported to Azerbaijan during the next four years, according to the plan, yielding their places of residence to Armenian repatriates from abroad.

The Karabakh Armenians are sending a petition with tens of thousands of signatures to Moscow asking for the annexation of Nagorno-Karabakh to Armenia.

Demonstration in Yerevan in protest against incidents with the Armenian population of the village of Chardakhly.

Attacks on Azerbaijanis began in the Kafan region of Armenia. It is obvious that the provocation of the Armenians in Chardakhli was the very Casus belli (“military incident”) that gave rise to these attacks.

Abel Aganbegyan, Advisor to the President of the USSR Mikhail Gorbachev, speaking in Paris, spoke out in defense of the annexation of Karabakh to Armenia. It is obvious that, not being sure of his impunity, Aganbekyan would not have made such a statement regarding the national policy of the Soviet Union. Especially abroad.

Police dispersed the protest action of Armenians against the appointment of an Azerbaijani to the post of director of the state farm in the village of Chardakhly, Shamkir region of Azerbaijan.

Azerbaijanis were expelled from the Kafan region of Armenia.

In Khankendi (Stepanakert), rallies began demanding the transfer of the NKAO (Nagorno-Karabakh Autonomous Region) from Azerbaijan to Armenia.

The first protest demonstration in connection with the events in the NKAO was held in Baku.

The Regional Council of People’s Deputies voted in Khankendi (Stepanakert) to request the transfer of NKAO to Armenia.

Mass demonstrations began in Yerevan in support of the transfer of the NKAO to Armenia.

Two Azerbaijanis were killed in a skirmish with Armenians in Askeran.

The chronology of events shows that the cause of the conflict between Azerbaijan and Armenia was not the events of 27-29 in Sumgayit, but a purposeful policy for the further seizure of Azerbaijani lands and their cleansing of Azerbaijanis.

Azerbaijanis have never become the initiators of aggressive actions against Armenians. They were loyal to their settlement in Azerbaijan, and demography is a vivid example of this. For example, there were practically no Armenians in Baku at the time of joining the Russian Empire in the early 19th century. At the beginning of the conflict in 1988, there were more than 200 thousand of them. Troughout Azerbaijan, the number of Armenians has grown from the beginning of the 19th century from tens of thousands to almost half a million by the end of the 80s of the last century. On the contrary, the Armenians, having settled on the Azerbaijani lands, having got stronger, began to press the owners, expel them, unleashed a war against them, and staged total ethnic cleansing. In 1989, at a meeting of the Presidium of the Supreme Soviet of the USSR, dedicated to the Karabakh conflict, Gorbachev asked the representatives of the Armenian intelligentsia where the 1.5 million Azerbaijanis who inhabited Armenia at the beginning of the 20th century had gone. The question remained unanswered. He himself answered: There was no one left.

This article originally appeared in Turan Informasiya Agentliyi on 22 Dec 2020.