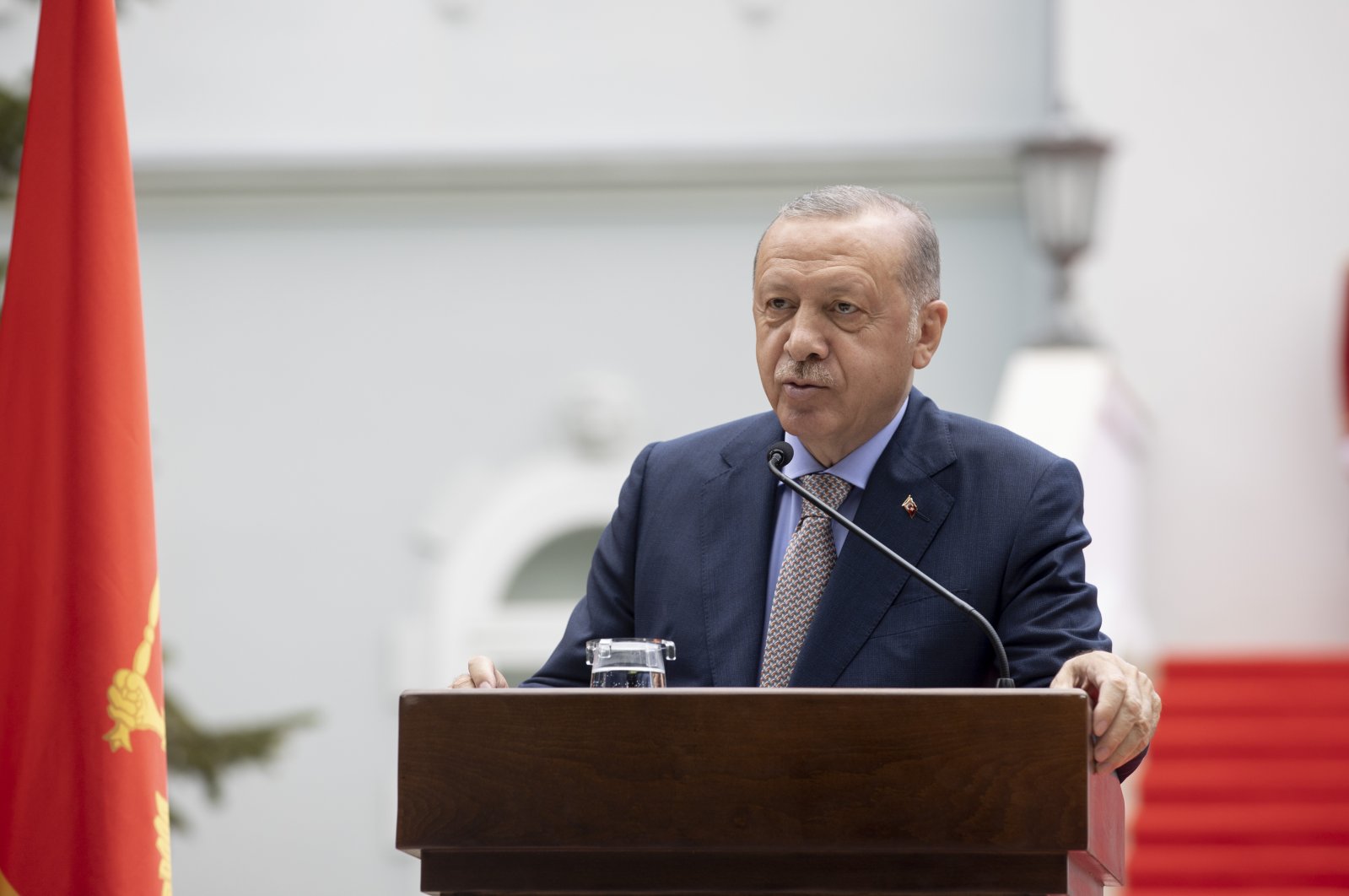 President Recep Tayyip Erdoğan welcomed the moderate statements by the Taliban, yet underlined that doubts still persist, especially regarding the security of the Kabul airport following a deadly terror attack that killed over 200.

The Taliban’s statements have been moderate but doubts still persist, President Recep Tayyip Erdoğan said Sunday, highlighting that Ankara is ready to provide all kinds of support to Afghanistan.

Speaking to journalists on his return from his Balkans tour, Erdoğan underlined that Turkey’s main concern in Afghanistan is the country’s quick recovery.

“We have given Afghanistan all kinds of support, including infrastructure and superstructure for 10 years. However, the Taliban have caused serious damage in Afghanistan’s north,” the president said, indicating that in order for Turkey to help Afghanistan, doors must be opened.

“Therefore, our intelligence is currently holding talks with the Taliban,” he explained.

The president further said that Turkey might help Afghanistan in carrying out reforms, including in the field of women’s rights.

“Regarding Afghan women, we see them as we see the women in our country and can take steps for Afghan women to live with the same rights. But, as you know, we cannot evaluate the conditions in Afghanistan the same as in Turkey,” Erdoğan said, reiterating that Turkey is ready to support Afghanistan if requested.

He also mentioned that Turkey may strike a similar agreement with Afghanistan as it did with Libya. On Nov. 27, 2019, the internationally recognized Libyan government signed a security cooperation agreement with Turkey. Within the scope of the agreement, Turkey began to provide military training to Libyan soldiers.

“I cannot say that making an agreement like that with Libya is out of the question. We can make a similar agreement as long as we find an interlocutor,” he said.

Erdoğan explained that the Turkish Embassy, which had been operating at Kabul Hamid Karzai International Airport for the past two weeks due to security concerns, has returned to its embassy building in the city center and is carrying out its work there.

“Our current plan is to continue our diplomatic presence in this manner. We update our plans constantly according to security developments. We have at the ready alternative plans for all kinds of possibilities. The security of our personnel is our priority,” he stressed.

Speaking on the latest situation regarding the Kabul airport, Erdoğan said that Turkey needs to monitor the process sensitively.

“You see, around 200 people died when no one expected. There are also Taliban members among those who died,” he said. “We will see what the Taliban’s stance will be on being a state and managing a state.”

“How can we give security to you (Taliban)? How can we explain to the world if blood is shed again when you take over security?”

Two suicide bombers and gunmen attacked crowds of Afghans flocking to Kabul’s airport Thursday, transforming a scene of desperation into one of horror in the waning days of an airlift for those fleeing the Taliban takeover. Nearly 200 Afghans were killed alongside 13 U.S. service members, Afghan and U.S. officials said.

Since 2002, the Turkish Armed Forces (TSK) have operated in Afghanistan under the U.N., NATO, and bilateral agreements to contribute to the peace, welfare and stability of the Afghan people.

Turkey had more than 500 noncombatant troops stationed in Afghanistan as part of NATO’s now-abandoned mission in the war-torn country.

Turkey has been in Afghanistan in a noncombatant role for two decades and has been involved in consultancy efforts, reconstruction and maintenance. It has been operating the airport for six years.

It had been negotiating with both the Taliban and Washington about playing a role in protecting the airport after the U.S. troop withdrawal, which is scheduled to be completed soon.

But the Taliban’s swift capture of the Afghan capital changed Ankara’s plans.

After the Taliban seized control of the country Turkey offered technical and security assistance at the airport.

Keeping the airport open after foreign forces hand over control is vital not just for Afghanistan to stay connected to the world but to maintain aid supplies and operations.

Turkish officials said that the Taliban have asked Turkey for technical help to run the Kabul airport after the departure of foreign forces but have insisted that Ankara’s military also withdraw fully by the end of August deadline.

The Taliban said that the group would secure the airport itself.

“We want good relations with Turkey, the Turkish government and the Muslim people of the Turkish nation. As for Turkish forces stationed in Afghanistan, we are not in need of them in our country and once the evacuation is completed we will secure the airport by ourselves,” Mujahid said.

The Taliban recently declared the war in Afghanistan over after taking control of the presidential palace in Kabul two weeks ago, sending Western nations scrambling to evacuate their citizens amid chaos at the Kabul airport as frantic Afghans searched for a way out.

It took the Taliban just over a week to seize control of the country after a lightning sweep that ended in Kabul as Afghan government forces, trained for two decades and equipped by the U.S. and others at a cost of billions of dollars, melted away.

Turkish personnel and all Turkish citizens who wished to leave Afghanistan have been evacuated from the country’s capital Kabul in a span of less than 48 hours, Defense Minister Hulusi Akar announced Saturday.

At a welcoming ceremony in the capital Ankara for troops arriving from Afghanistan, Akar said the evacuation was done through an air bridge between Kabul and Pakistan’s capital Islamabad with eight airplanes and two helicopters.

The evacuation was completed days before the Taliban’s Aug. 31 deadline for foreign forces to leave the country.

Akar added that all risks, threats and developments in the war-torn country are being closely monitored, and Turkey has taken all the necessary initiatives and measures for all scenarios.

“Our armed forces have been carrying out their mission with extraordinary efforts to contribute to world peace in several regions, from Libya to Kosovo, from Afghanistan to Bosnia-Herzegovina, and from Qatar to Somalia under the United Nations, NATO, OSCE (Organization for Security and Cooperation in Europe) and bilateral agreements,” Akar said.

He added that Turkey is expanding the scope of its influence and interests every day, and has now become a leader in international relations.

The ministry had announced the decision to withdraw its armed forces from Afghanistan Wednesday after evaluating the current situation and conditions.

“Turkish Foreign Minister Mevlüt Çavuşoğlu and I spoke again today about our continuing joint efforts to ensure a safe and orderly evacuation from Afghanistan,” Blinken said.

“Turkey is an important NATO ally and we’re grateful for its partnership,” he added.

Both ministers voiced that they were content regarding their cooperation with evacuations from Afghanistan. Akar also expressed his condolences for the U.S. soldiers that lost their lives in the recent terrorist attack at Kabul airport, carried out by a regional Daesh chapter.