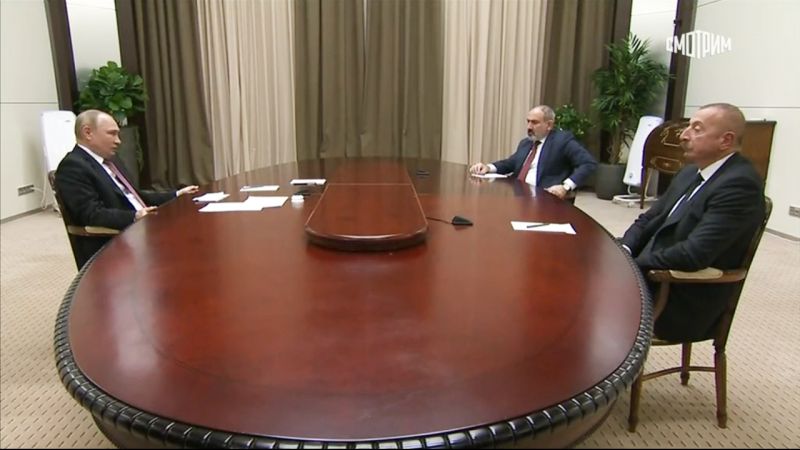 Talks between Putin, Aliyev and Pashinyan began in Sochi

Trilateral negotiations between the presidents of Russia and Azerbaijan Vladimir Putin and Ilham Aliyev, as well as Armenian Prime Minister Nikol Pashinyan, began in Sochi on the evening of November 26, according to Azerbaijan in Focus, reporting Turan News. Prior to that, a bilateral meeting between Putin and Aliyev took place.

Opening the meeting, Putin thanked the leaders of Azerbaijan and Armenia for accepting his invitation and said that they have to take stock of the past year.

Ilham Aliyev praised the activities of the Russian peacekeepers and Russia in general in the region, noting that there were no serious incidents in Karabakh over the past year. “This cannot be said about the Azerbaijani-Armenian border, but this is somewhat different,” he said.

Aliyev said that the overall situation in the region remains stable. Among the priorities that could not be resolved in a year, he named the issue of opening communications and delimitation and demarcation of borders between Azerbaijan and Armenia.

“Having resolved these issues, it would be possible to start work on a peace treaty, recognizing the territorial integrity and sovereignty of each other,” Aliyev said.

In turn, Pashinyan expressed disagreement with Aliyev, saying that the situation is stable. So, since May 12, the Azerbaijani Armed Forces “penetrated” into the territory of Armenia, which caused a “crisis” on the border.

Pashinyan also disagrees with the fact that many points of the agreements have been resolved. In particular, there remains the problem of “hostages and detainees,” he said, avoiding the term “prisoner of war”.

The Prime Minister of Armenia confirmed his readiness to start the process of delimitation and demarcation of the border and resolve the issue of opening communications.

As for the Nagorno-Karabakh settlement, Armenia is in favour of discussions within the framework of the OSCE Minsk Group, as well as at the bilateral level.

In this regard, he made it clear that Yerevan is ready for direct communication with Baku. “It is important to start taking concrete decisions,” Pashinyan said in conclusion.

In response, Vladimir Putin said that the priority is the opening of communications, in which all countries in the region are interested, as well as the delimitation and demarcation of the border, “on which an agreement was reached.”

He welcomed the readiness of the parties to start bilateral contacts, as well as contacts on other international platforms.

This article originally appeared in TURAN INFORMASIYA AGENTLIYI on 26 Nov 2021.