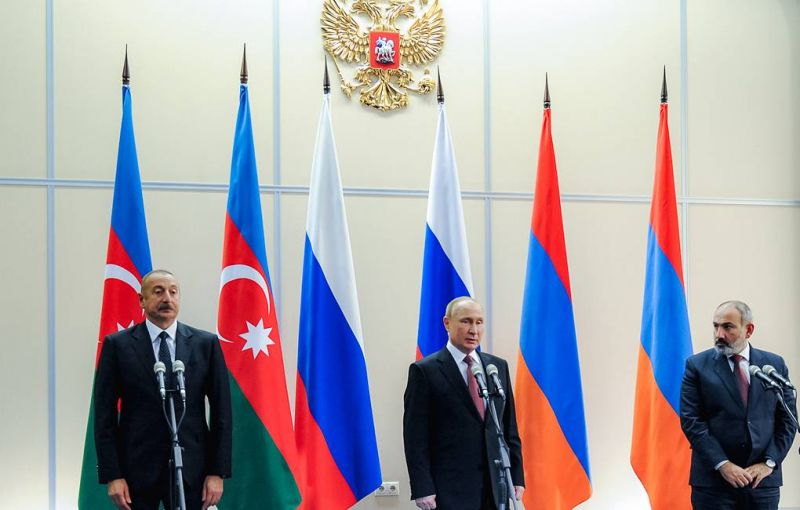 Talks in Sochi were constructive – leaders of Russia, Azerbaijan and Armenia said

Trilateral negotiations between the presidents of Russia and Azerbaijan Vladimir Putin and Ilham Aliyev, as well as Armenian Prime Minister Nikol Pashinyan in Sochi ended on Friday evening. They lasted about three hours, and a statement was signed as a result.

At a briefing after the meeting, Vladimir Putin said that the meeting had been “constructive.” According to him, a “deep analysis” was made and agreements were reached on a number of “key issues.”

“The first is the creation by the end of this year of mechanisms for the demarcation and delimitation of the border between the two countries.

The second is humanitarian issues. The third is economic ties and, above all, the unblocking of transport corridors. This also applies to the railway and road communications,” Putin said.

According to him, in a week the deputy prime ministers of the three countries will gather in Moscow and announce the agreements reached.

In turn, Ilham Aliyev expressed gratitude to Russia for its peacekeeping activities in Karabakh. According to him, there were no serious incidents in the zone of responsibility of the peacekeepers this year.

A “sincere” conversation took place on the issues of delimitation and demarcation, as well as the issue of unblocking communications. “We openly discussed our plans and issues of concern and the decisions we made will contribute to ensuring that the situation in the South Caucasus will be safe and predictable,” Aliyev said.

Referring to humanitarian issues, he said that after the end of the war in November 2020, Azerbaijan released more than 100 Armenian soldiers. “Two Armenians were released today and we intend to continue this line in further,” Aliyev said.

“We see the same attitude from the Armenian side and this creates preconditions for the normalization of the situation in the region. I have repeatedly said that we are determined to turn the page of many years of confrontation with Armenia and begin normal interaction,”- Aliyev stressed. The meeting will result in good results, Ilham Aliyev noted in conclusion.

In turn, Nikol Pashinyan confirmed that the meeting was constructive and positive, all issues on the agenda were discussed. “We have clarified our positions on many issues and it turned out that there are no discrepancies on a number of issues,” he said.  “In particular, this concerns the opening of communications and how they will work.”

As for the delimitation and demarcation of borders, first it is necessary to create mechanisms of stability on the border between Armenia and Azerbaijan, Pashinyan said, as well as resolve humanitarian issues.

In conclusion, Vladimir Putin said that following the meeting, a statement was signed, which states what the parties had agreed on.

This article originally appeared in TURAN INFORMASIYA AGENTLIYI on 26 Nov 2021.