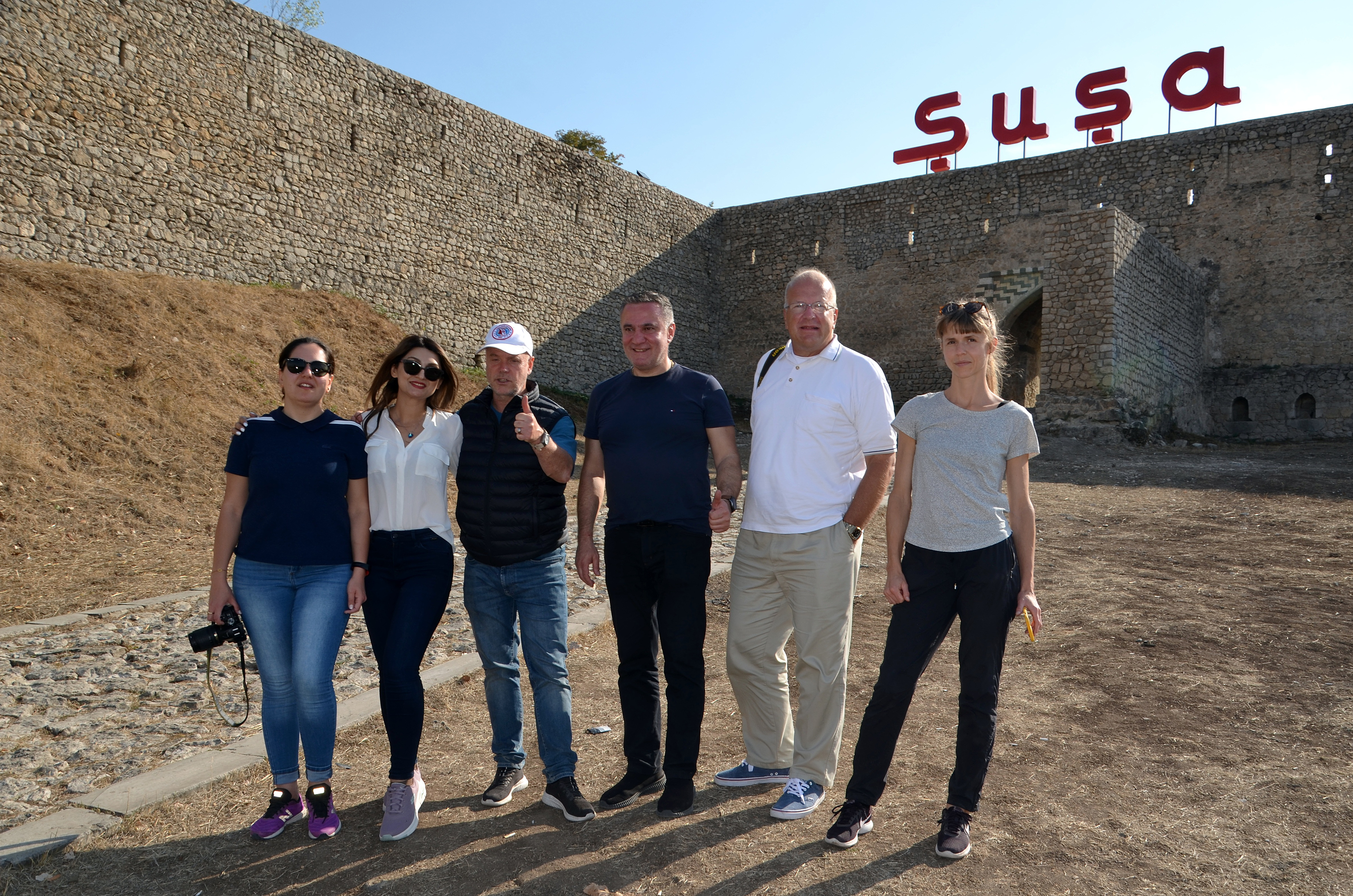 Shusha Azerbaijani: Şuşa. The town has religious, cultural and strategic importance to Azerbaijan. Shusha is often considered the cradle of Azerbaijan’s music and poetry, and one of the leading centres of the Azerbaijani culture. It was founded by Azerbaijani Khan Panah Ali in 1752. Many famous Azerbaijanis personalities are natives of Shusha – Khurshudbanu Natavan, Gasim bey Zakir, Abdurahim Bey Hagverdiyev, Bulbul, Yusif Vezir Chemenzeminli, Uzeyir Hadjibeyov and many others.

There were factories in Shusha of Eastern musical instruments, baking factory (what is back again, we tried the very tasty fresh bread). Factory, weaving fabric of Karabakh silk combinat, network of electricity, basis of logistics, repair and reconstruction office, restoration office of monuments and many others. Shusha was a city of monuments which had 300 historical monuments, 550 ancient residential buildings, 870 meters long restored castle walls in 350 hectares land. 23 of monuments that belong to the republic – wide and world-wide famous  monuments. Richness of national monuments.  Shusha as a richest land of city culture, most of these monuments were built in 18 – 19 centuries. Each house, street, great castle walls, mosques, magnificent minarets, remnants of  grand castles are the signs of past. On the 8th of November 2020 – The city of Shusha was liberated from Armenian occupation. Karabakh is Azerbaijan, and needs to be rebuilt again by the homecoming population, ore foreign investors.

The Battle of Shusha 1992 was the first significant military victory by Armenian forces during the First Nagorno-Karabakh War. The battle took place in the strategically important mountain town of Shusha on the evening of May 8, 1992, and fighting swiftly concluded the next day after Armenian forces captured it and drove out the defending Azerbaijanis. The capture of the town proved decisive, its loss marked a turning point in the war, and led to a series of military victories by Armenian in the course of the conflict.

The Battle of Shusha 2020 was a battle fought between the armed forces of Azerbaijan and Armenia, over the control of the city of Shusha, 44 days during the second Karabakh war. The battle is considered one of the bloodiest battles of the war. Shusha, is usually referred to as the ”beating heart” of the region.

In September 2021 Cawa Media was the first Swedish Journalists to get State permission to visit the region, and see live demining of fields made possible by Azerbaijani Mine Action Agency ANAMA. We even got to see a real mine explosion. 27 special educated soldiers, 40 soldiers with dogs working daily with demining. Hard work, and very dangerous. Representatives of ANAMA showed special for journalists a bomb explosion to get a real feeling of the past war. See our video…and pictures:

Cawa Media visited the city of Shusha. We visited parts of the city, and the place where Azerbaijan troops recaptured the city. Most of the beautiful city of Shusha are still in ruins, but slowly some parts is being rebuilt again. Life is slowly returning to Shusha. After the second Karabakh war, the supply of electricity and water resumed in the city, two grocery stores and a bakery were opened what we both visited. The main thing is that residents who have not been here for several decades now reached and returned into the city.

Restorations are in progress, and the reopening of Karabakh Hotel after restauration is also in progress (reopened in September 2021). The International Press stayed in Khari bulbul hotel restorated in May 2021. The hotel was very nice, modern and had a wonderful restaurant. We saw some progress, and that people want to rebuild and restore if it is possible.

On 17 October 2020, the city of Fuzuli was liberated by Azerbaijan after 28 years of occupation by the armed forces of the Republic of Armenia.

Fuzuli International Airport – On 26 November 2020, the Azerbaijani Ministry of Transport, Communications and High Technologies reported that the International Civil Aviation Organization (ICAO) had accepted the appeal of the State Civil Aviation Administration to include six new airports, including the airfield in Fuzuli and Zangilan, plus Lachin, in its catalog of international airport codes In January 2021, President Ilham Aliyev issued a decree on the construction of an international airport in Fuzuli. On 14 January, the groundbreaking ceremony for the future airport took place. The runway is completed and was used for the first time on 5 September 2021, when passenger aircraft Airbus A340-500 of Azerbaijan Airlines and cargo aircraft Boeing 747-400 owned by Silk Way Airlines made successful test flights, landing at the airport.

Very hard feeling walk between ruins, find rests of people belongings that left in a hurry. We found one oil painting what was done by an unknown local artist, or student that we took back as a reminder of what war can do to civilian people. Our sincere wish is that the city of Shusha, and the surrounding region will be rebuilt with new Smart Villages in the Agali village of Zangilan early 2022, and that people will move back to their homeland.

Cawa Media pictures from September 2021 of Shusha and surroundings will be exhibited at the European Parliament in Brussels. More info about this special exhibition will follow on our site during October/November 2021.

This article originally appeared in DAILY SABAH on 05 Oct 2021.