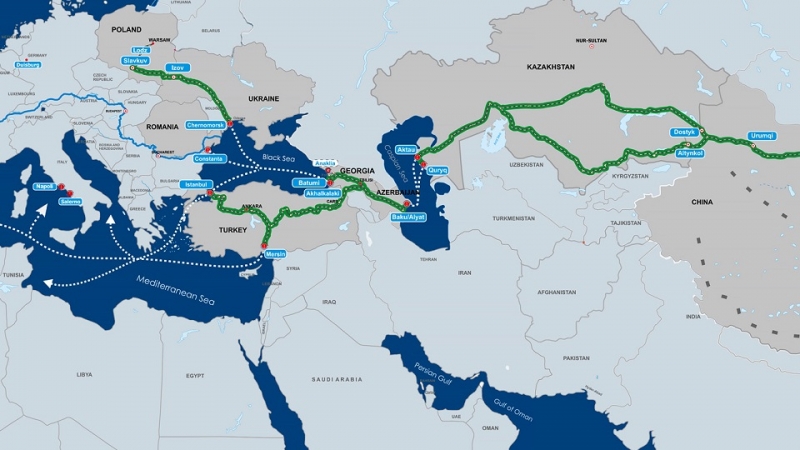 Kazakhstan, Azerbaijan, Georgia and Turkey have adopted a Roadmap for the development of the Trans-Caspian Corridor in Aktau on November 25, 2022, according to Azerbaijan in Focus, reporting Turan News Agency.

The countries included in the international trade and transport project “Middle Corridor”  with its main section – the Trans-Caspian International Transport Route (TITR), are making unprecedented efforts to increase cargo turnover in this direction.

Behind the intensification of consultations and real steps of the parties, especially Azerbaijan, Kazakhstan, Georgia and Turkey, is the understanding that the transit of goods through the Russian Federation and Iran will not be possible in the short and long term due to international sanctions, which means that the demand for the Middle Corridor, along with TITR is growing, and you should quickly use the current situation.

The events of autumn gave a clear idea that the military confrontation between the Russian Federation and Ukraine will not end in 2022 and may spread to 2023, which means that the logistics of cargo transportation must be rebuilt taking into account the existing realities and disappointing geopolitical forecasts.

Of particular concern is Kazakhstan, which has the longest continuous land border in the world with the Russian Federation, and the transit of goods through it has always been a priority.

However, the problem with the acceptance of goods from the territory of the Russian Federation to the EU forced Kazakhstan to consider alternative routes this year, primarily through the Caspian Sea, since it is in this direction (sea-land combination) that there is a fairly developed infrastructure, moreover, on the territory of Azerbaijan, Georgia and Turkey.

In the fall of 2022, work to increase the load of TITR reached its peak, in fact, negotiations and conferences are held every week, including with the participation of representatives of the EU and the USA.

The consultations intensified after the official re-election of Kassym-Jomat Tokaev to the post of President of Kazakhstan (he won the elections on November 20).

EU High Representative for Foreign Affairs and Security Policy Josep Borrell, who visited Kazakhstan on November 22, said that the EU “should deepen ties with the Central Asian region, use its huge potential, which is represented in energy supplies, supplies of critical raw materials and new transport corridors, who do not depend on Russia.”

The talk is about the Trans-Caspian international transport route. “The EU is one of the main trade and investment partners of Central Asia. Over the past 10 years, the EU has invested more than €100 billion in the region, making us the largest source of foreign direct investment, well ahead of Russia and China,” Borrell said.

He acknowledges that Russia and China continue to play an important role in Central Asia, but at the same time, the countries of this region seek to diversify trade and foreign policy relations, considering the EU as the most suitable partner, and the EU, in turn, is interested in “ take advantage of these changes.

Demonstrating the seriousness of intentions to diversify routes, on November 25, Astana hosted a Ministerial meeting on “Trans-Caspian interconnectedness” (website of the Ministry of Foreign Affairs of Kazakhstan).

“Issues were considered on the development of a set of measures for the accelerated development of international transport routes through the modernization of the conditions for their operation and practical steps were developed to strengthen cooperation in the Caspian-Black Sea region, dialogue in order to better unlock the transit and transport potential of the entire Caspian region,” the head said. Ministry of Foreign Affairs of the Republic of Kazakhstan.

Uskenbayev said that over 10 months of this year, about 1.5 million tons of cargo was transported through the seaports of Aktau and Kuryk via TITR, which is 2 times higher than last year.

The parties believe that by 2025 this volume will reach 10 million tons, and the implementation of the Road Map signed on November 25 in Astana on the simultaneous elimination of bottlenecks and the development of the Middle Corridor for 2022-2027 will be aimed at this.

It is noteworthy that on November 25 in Baku, the President of Azerbaijan spoke at an international conference at the ADA (Azerbaijan Diplomatic Academy) “Along the Middle Corridor: Geopolitics, Security and Economics”, and this coincidence does not look accidental.

At the beginning of his speech, Ilham Aliyev stressed that “one of the important elements for the implementation of any large-scale project is stability.”

“It is important what each country participating in the “Middle Corridor” does within itself. Thus, stability has been reigning in Azerbaijan for many years, and this is one of the main factors of economic development. Azerbaijan’s role in the international arena has also been shaped by our domestic policy. Because strong political, economic stability and predictability of government policy – all these factors, along with closer relations with as many countries as possible, have led to today’s reality,” Aliyev emphasized.

“We are between Europe and Asia. There is a physical presence of infrastructure because we have been investing in this sector for many years… Five years ago, together with our partners, we opened the Baku-Tbilisi-Kars railway, and now, due to the growing volume of cargo, we have begun investing in the expansion of the Georgian part of the BTK (more than $100 million, by 2024)… At the same time, other transport projects such as the North-South corridor will add synergies to the East-West corridor. Azerbaijan is a member of both corridors, and most of the transport and logistics infrastructure associated with these corridors is ready in Azerbaijan. What are we doing now? We are modernizing. We are building new railways, investing in air cargo… Our commercial seaport, a relatively new element of our transport and communications projects, will be expanded from 15 million tons to 25 million tons of cargo per year. Because it is necessary, because there is a new geopolitical situation in the world and there is a need to transport more cargo from Azerbaijan and through Azerbaijan,” Aliyev said on November 25.

TITR FOR OIL AND GAS TRANSIT

Former US Ambassador to Azerbaijan, and member of the board of directors of the Jamestown Foundation Matthew Bryza at a conference on November 25 in Baku asked the President of Azerbaijan about the delivery of Turkmen gas to Azerbaijan and about the prospects for transit.

Aliyev recalled that gas swap operations with Turkmen gas have been underway since January 2022. He also noted that the Azerbaijani economy is now experiencing growth, and there is a huge demand for additional volumes of gas. In early December, Ashgabat will host a summit of the presidents of Turkmenistan, Azerbaijan and Turkey, and the gas issue will be among the key ones.

The issue of the transit of Turkmen gas through Azerbaijan, Georgia and Turkey to Europe requires the development of infrastructural and legal aspects, and even despite lobbying by the United States, it looks “raw” (opinion of experts). The situation with the transit of oil from Kazakhstan and Turkmenistan through Baku is different.

Over several years, Turkmenistan has been supplying part of its oil to the Baku-Tbilisi-Ceyhan oil pipeline (several tens of thousands of barrels per day), and with the possible development of the “Dostlug” field in the Caspian together with SOCAR, it can increase these volumes.

Cooperation between Kazakhstan and Azerbaijan is also growing. So on November 25, it became known that Azerbaijan is providing Kazakhstan with a floating semi-submersible drilling rig “Dede Gogrud” to start drilling on December 15 on the Caspian project of Kazakhstan – “Zhenis”.

As for transport opportunities, as early as January 2023, 1.5 million tons of Kazakh oil will pass through the Baku-Tbilisi-Ceyhan (BTC) oil pipeline against 200,000 tons in 2022.

In general, the President of Kazakhstan is determined to increase the volume of oil transportation through the ports on the Caspian Sea – Aktau and Kuryk – up to 20 million tons per year through TITR.

It is not only about the BTC, but also the use of the Baku-Supsa oil pipeline (since April it has been idle) and the Baku-Batumi railway (there is a terminal in Batumi managed by KazTransOil).

The export volumes of “black gold” of Kazakhstan are about 67-68 million tons per year, of which more than 52 million tons – through the territory of the Russian Federation through the system of the Caspian Pipeline Consortium.

However, due to international sanctions against the Russian Federation for its invasion of Ukraine, as well as in connection with plans to increase production at the Tengiz field from 2024 (an increase of 12 million tons/year), Kazakhstan thought about diversifying exports, moreover, about transferring significant volumes across the Caspian.

U.S. Ambassador to Kazakhstan Daniel Rosenblum noted on November 25 that “all oil producing companies in Kazakhstan are actively engaged in a conversation with the government of Kazakhstan and not only Kazakhstan about finding new alternative ways to export oil, because the issue is now acute.”

The share of Kazakhstan in world oil production is 2%, in the supply of oil to the world market – 1% (about 1.4 million barrels per day), and any problems in the way of oil exports from Kazakhstan affect world markets.

“You have probably already seen the news that about 1.5 million tons of oil will be transported from the beginning of 2023 through Baku-Tbilisi-Ceyhan. I think this will lay the foundation for new alternative ways, this is one of the first steps,” the ambassador added.

In 2008-2016 Azerbaijan provided the transit of part of the oil from the Kazakh Tengiz field, and in one period (several years) up to 2 million tons of oil per year went from Kazakhstan through the BTC.

However, since 2017, all oil from Tengiz goes to CPC. In a conversation with ASTNA, an expert on the oil market of Azerbaijan noted that no more than 8-10 million tons of oil from Kazakhstan can actually be transported through Baku from 2023, taking into account the involvement of the BTC, the Baku-Supsa oil pipeline and the railway.

“BTC will be able to take no more than 1.5 million tons of sour oil from Kazakhstan per year, and only such a volume will not change the fractional composition of BTC Blend, which is known on the European market and has its own guaranteed buyers. As for the Baku-Supsa oil pipeline (capacity 5 million tons/year), its throughput capacity can be increased to 7 million tons/year, no more,” the expert noted.

He believes that it is possible to transport no more than 2 million tons of Kazakhstani oil by rail in the direction of the Black Sea ports of Georgia. Thus, even if Kazakhstan wants to transport up to 20 million tons per year through the Caspian Sea, Baku is ready to organize the reception and distribution of only half of this volume.

Nevertheless, it is TITR that now seems to be a really working route, and taking into account the intentions of Kazakhstan and Azerbaijan to expand the tanker fleet in the Caspian Sea, and the opportunities to increase the capacity of the BTC to 2.2 million barrels per day from 1.2 million volumes of oil through Baku is promising.