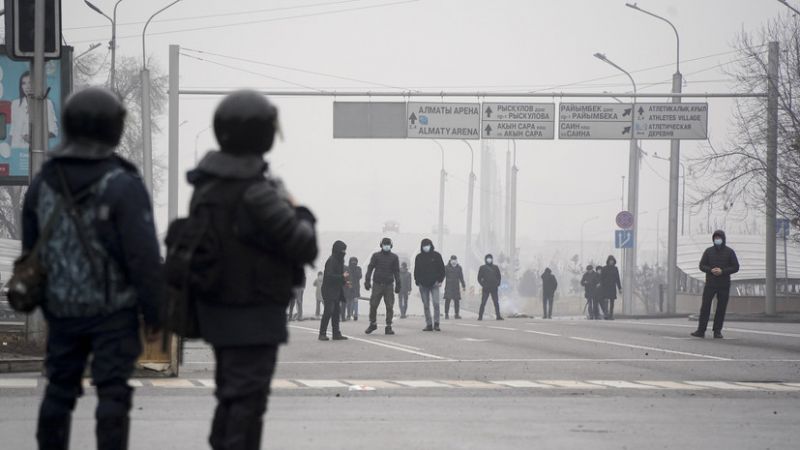 Kazakhstan has appealed to its partners in the Collective Security Treaty Organization (CSTO) for help “in overcoming this terrorist threat, according to Azerbaijan in Focus, reporting Turan News, citing TASS. In so doing, Kazakhstan “described the unrest as an act of aggression”.

Note that acting CSTO chairman Nikol Pashinyan reacted promptly to this appeal: “Owing to the appeal of Kazakh President Kassym-Jomart Tokayev and in view of the threat to national security and sovereignty of Kazakhstan, caused among other things by foreign interference, the CSTO Collective Security Council decided, in line with Article 4 of the Collective Security Treaty, to send a CSTO collective peacekeeping force to the Republic of Kazakhstan for a limited period to stabilize and normalize the situation there”.

However, in his address to the nation Wednesday afternoon, Tokayev spoke of highly organized bandit and hooligan elements, of a carefully thought-out conspiratorial action plan that was financially motivated.  Not a word about terrorism and aggression.

However, there are no facts of aggression on the part of neighboring or other states against Kazakhstan. In other words, Article 4 cannot be used or it will be used in violation of the UN Charter. Article 51 of the UN Charter states: “This Charter shall in no way affect the inherent right of individual or collective self-defense if an armed attack occurs against a member state until the Security Council has taken the measures required to maintain international peace and security. Measures taken by member-states to ensure the right of self-defense shall be immediately reported to the Security Council and shall in no way affect the authority and responsibility of the Security Council, under the present Charter, to take at any time such action as it deems necessary to maintain or restore international peace and security”.

Again, there is no fact of attack. Perhaps, we are talking about hybrid warfare or aggression. But then, if the head of Kazakhstan talks about aggression and terrorism, he must promptly submit to the UN Security Council, as required by the Charter, evidence of this and inform the UN about it – the organization where he worked in a high position and knows better than anyone the mechanisms of this organization’ involvement.

In his address to the nation on January 5, Tokayev spoke clearly about the internal nature of the events. He does not speak about any links between the protesters and external forces. There is nothing in his speech about external forces, let alone aggression. Moreover, Tokayev admits that the root of the problem is the political crisis in the country: “In the near future I will make new proposals on political transformation of Kazakhstan. I continue to adhere to the same position of consistent reforms”.

However, implementation of the reforms at gunpoint of “peacekeepers” is not the way to establish trust between the power and the society. This is fundamentally wrong. The Kazakh people will perceive the introduction of troops as an act of aggression by the CSTO, as it was perceived in Azerbaijan when on January 20, 1990, the Soviet troops were introduced into Baku for the establishment of constitutional order. This was the point of no return to the Soviet past.