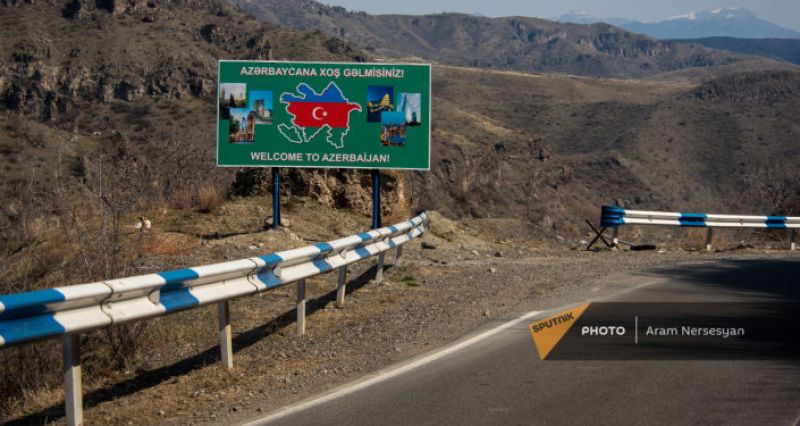 The road where Armenians wounded an Azerbaijani border guard is blocked

On August 25, at 23:00, the Azerbaijani military blocked a section of the road near the border village of Shurnukh through which the highway connecting the Armenian cities of Gafan-Goris passes, according to Azerbaijan in Focus, reporting Turan News, referring the National Security Service of Armenia on the morning of 26 August.

At the same time, about 40 Armenian vehicles were blocked on the said section which passes through the territory of Azerbaijan. They were blocked for more than 4 hours and were withdrawn from there with the help of Russian peacekeepers.

The Armenian media reported the incident at midnight on August 25 without explaining what caused the actions of the Azerbaijani side. However, on the afternoon of August 25, two Armenian soldiers attacked an Azerbaijani border guard, Ruslan Shiraliyev and wounded him with a bayonet knife.

According to the State Border Service of Azerbaijan, the incident occurred on a section of the Goris-Gafan road near the village of Ashagy Jibikli, the Gubadli region. After that, the Azerbaijani side stated that an adequate response would be given for this provocation.

The incident took place on August 25 at 15:45 on the territory of the border-combat point of the separate border division “Gubadly”, located on the section of the Gorus-Gafan road near the village of Ashagi Jibikli, Gubadly region, the report of the State Border Service of Azerbaijan.

“The soldier Ruslan Shiraliyev was urgently taken to the military hospital of the State Border Service, at present there is no threat to his life,” the message reads. All responsibility for the incident lies with the Armenian side, an adequate response will be given to this provocation, the State Border Service of Azerbaijan emphasized. The section of the Gorus-Gafan road passes through the territory of Azerbaijan.

Azerbaijan, showing goodwill, allowed the Armenians to use temporarily this road. However, the Armenians staged provocations several times pouring paint on the sign indicating the territory belongs to Azerbaijan or opening fire in the direction of Azerbaijan.