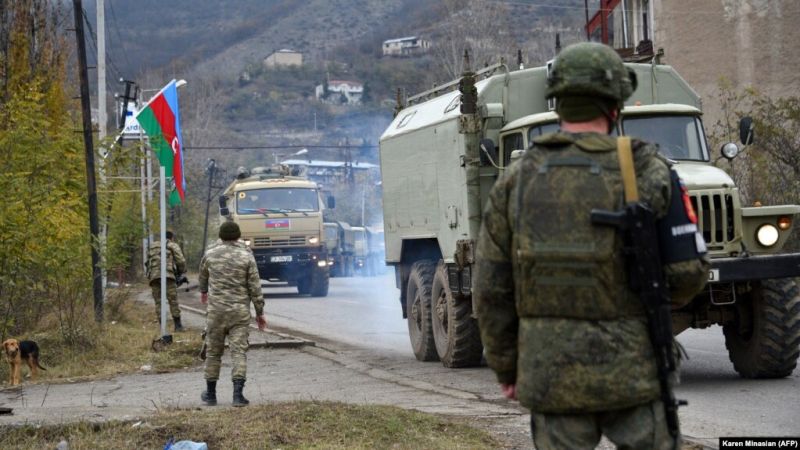 There are no Armenians or shops in Lachin. Everything is closed

The city of Lachin is empty, there is not a single inhabitant in it, everything is closed, shops are not working. There is nothing in Lachin, except for the posts of Russian peacekeepers and passing convoys,” according to Azerbaijan in Focus, reporting Turan News, citing an employee of one of the law enforcement agencies of Azerbaijan, who wished to remain anonymous.

According to him, on the Lachin circle he managed to see only 3-4 cars with Armenian numbers, while Azerbaijani columns with numerous heavy military equipment pass through this circle every day. The employee returned from a long business trip to Karabakh, through Gubatly, Aghdam, Kalbajar, Fizuli, Jabrail and Zangilan regions.

By agreement, Armenian convoys, accompanied by peacekeepers, pass along the Lachin road to Armenia on odd days of the week, and Azerbaijani convoys on even days. However, the Azerbaijanis strictly adhere to this schedule, but the Armenians drive along this road all days of the week. On Tuesday, Thursday and Saturday, Armenian drivers are waiting for the Azerbaijani convoys to drive from north to south at 9 o’clock in the morning, and from south to north at 16 o’clock in the evening, and they drive in this time interval.

The source also added that Azerbaijani and Armenian drivers, at the request of the Russians, remove national flags from their cars. The peacekeepers say that this is done so that the local population does not interfere with the advance of the columns. Previously, there were cases of civilians standing by the roadside throwing stones at cars.

In Lachin, an Azeri security officer saw only Russian flags. He spoke with a Russian military. The Russian shared his impressions saying that in conversations with Azerbaijanis, he hears arguments about the need for a peaceful life. And the Armenians who confess with the Russians often tell with satisfaction how the Armenians killed the Turks.

The same peacekeeper of the RF Armed Forces believes that the Russian military presence in the region will not last longer than the first five years. The layout of peacekeeping posts and patrols differs depending on the geographic characteristics of the area. If in Agdam, where the mountains are low (near the Shelly village), mobile patrols of Russians travel between Azerbaijani and Armenian military posts, then in Lachin and Gubadly this is impossible. The posts of the opposing sides are located on the slopes or ridges of the mountains, there is no road for the Russians to patrol between them, and the soldiers of the warring armies stand in front of each other.

In Kelbajar, our interlocutor saw many Azerbaijani farmers living in tents next to their herds of farm animals and bee hives.  We will add official information from Baku about the second road under construction, bypassing the city of Lachin. The construction of a ring road with a length of 23 km has begun, without an entrance to Lachin, said  Hidayat Rustamov, Deputy Head of the Main Department for Operation and Repair of Highways of the State Agency for Highways. The alternative new road will have two lanes.

“Currently, the road to Lachin is under the control of the peacekeepers. We have begun construction of a 23 km long circular alternative road without entering Lachin to ensure convenient traffic,” Rustamov said.
According to the Armenian press, the Russian armed forces are stationing their posts in the Zangezur corridor, near the village of Voskepar. Armenian analysts believe that Russia is thus preparing conditions for the opening of transport links through Zangezur.

On May 20, 2021, President Ilham Aliyev announced that the Armenian population only comprised 25 thousand in Karabakh under the protection of Russians.