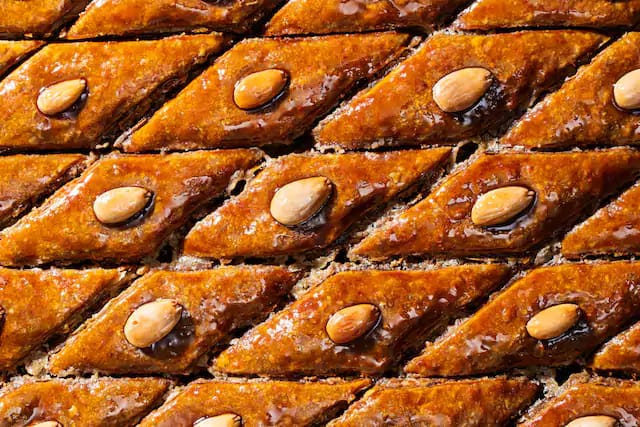 This new Azerbaijani bakery offers stories as good as its pastries

Babysitting turns out to be as much a part of my routine as chewing and telling. Part of a critic’s job is to keep tabs on what’s opening, menu changes, chef moves, even what’s been overlooked.

Thus, in an industry (still) as large as the one I cover, tips are always welcome. Sometimes, suggestions come from strangers, readers imploring me to help rescue a place they love, typically one that’s hungry for more customers. Other days, prompts to check out a business are more subtle, a stroke of happy chance.

Consider the night I invited my Iranian American colleague and friend, Jason Rezaian, and his wife, Yegi, over for a socially distanced dinner in my backyard. Rezaian hoped to introduce me to an Azerbaijani bakery and its Russian-inspired honey cake. But the dessert was gone by the time he got there, so he scooped up some pakhlava, as in baklava, instead.

The host gift was memorable on two counts. The shiny, diamond-shaped pastries, each four-inch slice set off with an almond, were reason enough to head to its source. I couldn’t wait to taste more from Sharbat bakery in Adams Morgan. Sweeter still, the confection came with what every dinner guest should bring to the table: a good story.

Rezaian, whose account of being jailed in Tehran is detailed in his book, “Prisoner: My 544 Days in Iranian Prison,” shared that the pakhlava was part of the care packages his Azerbaijani cellmate, whom he knew as Mirsani, received from his family several times a year. Mirsani’s sister, Ilhama Safarova, was among the contributing cooks. When her daughter, Shukrana, moved from Azerbaijan to Washington two years ago to attend college, Safarova, a trained nurse, came along. The women connected with the Rezaians, gifting them a honey cake. The couple were so smitten with the many-layered creation, they urged Safarova to make it known to a wider audience and open a bakery. 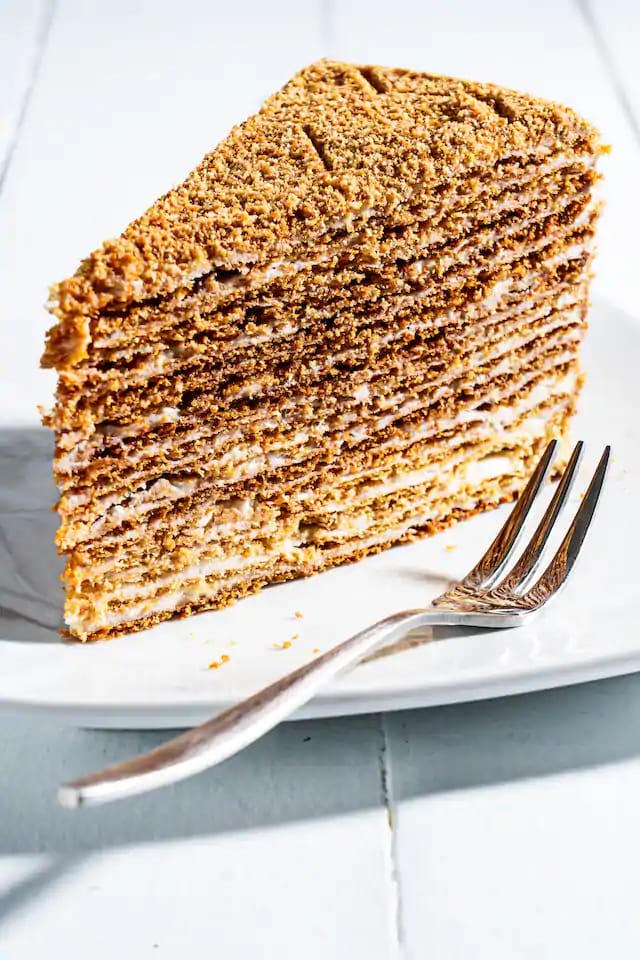 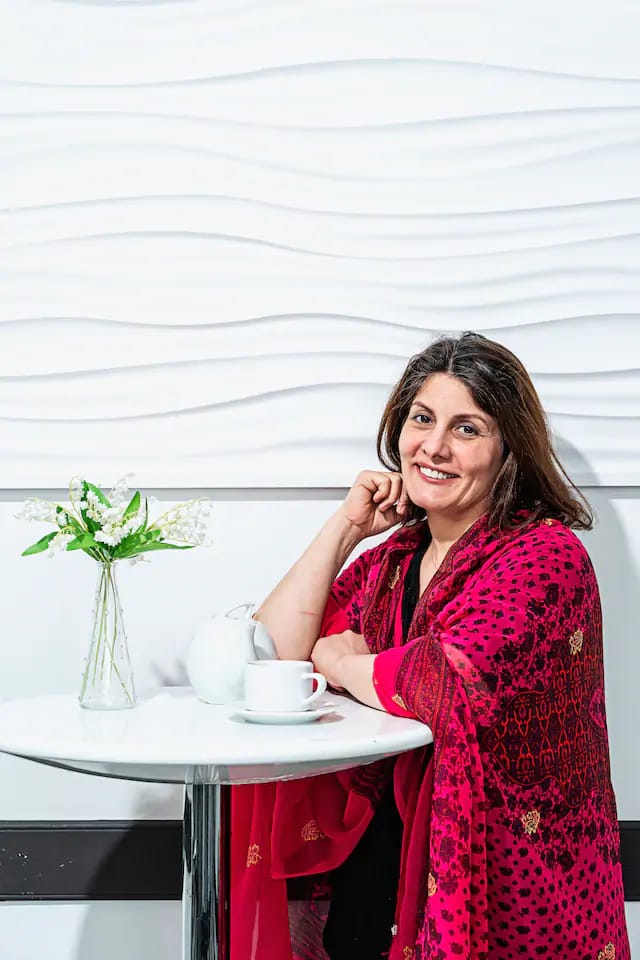 Safarova listened, hurrah, and the idea became a 20-seat reality in July. The name Sharbat pays homage to a refreshing Azerbaijani drink made from fruit and flavorings of rose petals or saffron, says Shukrana, 19, who acts as interpreter for her mother and a helpmate in the bakery. Sharbat also refers to the simple syrup to sweeten the pakhlava, versus the honey used by some other countries.

Young as it is, the bakery has friends in high places. The Azerbaijani ambassador to the United States, Elin Suleymanov, says pakhlava is one of several things he seeks out on his multiple weekly trips to Sharbat. Its shape, its light pastry layers and comparatively gentle sweetness distinguish it from the foreign competition back home, a country that shares borders with Armenia, Georgia, Iran and Russia.

The ambassador jokes when he says, “We have three epic battles” in the region: “Who makes the best tea, dolma and baklava.” Suleymanov also sings the praises of the Azerbaijani style of tea service at Sharbat, where loose tea is offered with rock sugar, which is meant to be bitten before sipping the drink, and a pear-shaped glass designed to keep the tea hot.

[Fresh reasons to return to 1789, one of D.C.’s oldest restaurants]

Reminding the diplomat even more of home is the shorgoghal, a bun-shape pastry whose flaky exterior gives way to a center seasoned with anise, black pepper and cumin. Both Suleymanov and Safarova are from Azerbaijan’s capital and largest city, Baku, where shorgoghal is a featured attraction at the upcoming Nowruz, the five-day holiday celebrating both the new year and the arrival of spring. Sharbat’s shorgoghal, glossy from a wash of egg yolk and speckled with black sesame seeds, calls to all the senses. Bite down, and the treat shatters audibly, like footsteps in hard snow. You’ll want a napkin nearby. 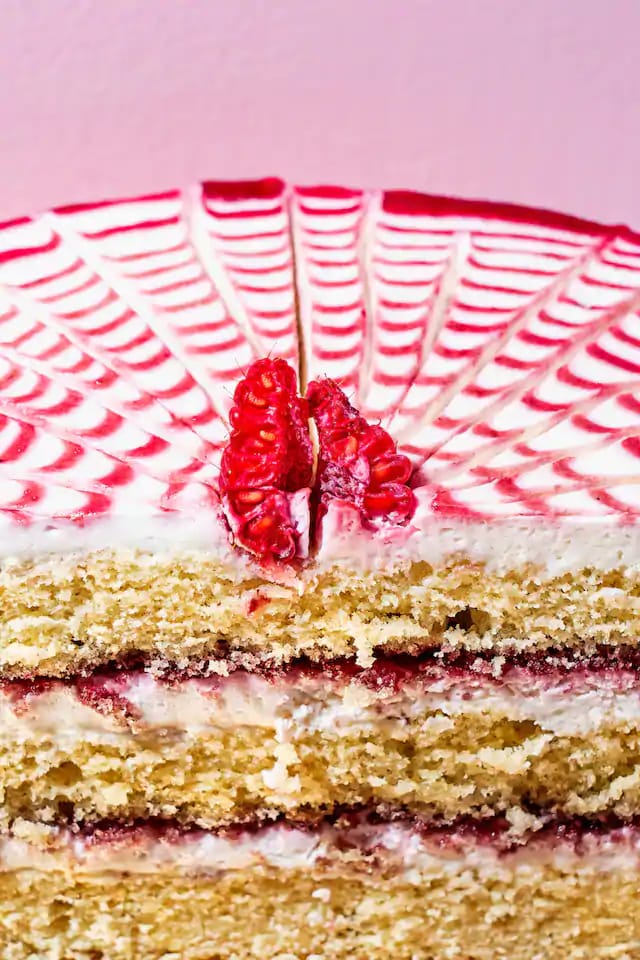 A visit to the bakery, around the corner from a McDonald’s, takes customers from rows of tall tables on the ground floor up a short flight of stairs to a pastry case sometimes watched over by Shukrana. Her mother makes a dozen or so cakes, most in fruit flavors, and I could make a case for every slice on display — raspberry, apricot, caramel mousse — that I’ve tried. What each type shares is a moist crumb, fresh whipped cream and a restrained hand with sugar. Want an off-the-menu flavor or a bigger size cake? With advance notice, Safarova can accommodate you.

I can understand why Rezaian wanted to bring me the honey cake. It’s in a class of its own. Like some of the other prizes here, this legacy from when Azerbaijan was under Soviet rule is fussy going for the baker. Both the dough (made from honey, eggs, butter and flour) and the filling (coaxed from milk, egg and sugar) are whipped up on the stove and later alternated in a brown beauty rising as high as 30 thin layers. The combined flavor is similar to graham crackers and creamy white filling — pleasantly mysterious. The surface of the cake reinforces its name, with the hexagon pattern of a honeycomb.

On the days I’ve had treats from Sharbat delivered, I’ve been met by the fragrance of a busy bakery at my door. The aroma from the brown bags finds me dropping whatever I’m doing and arranging their contents on my counter for a spontaneous graze-athon.

Forgive me while I tear into borek, a bready turban veined with shredded boiled chicken, sweet carrots and bell peppers and as weighty an icon as a muffuletta. Apologies for not wanting to share xachapuri, a crackling-crisp golden sleeve lightly stuffed with minced beef. 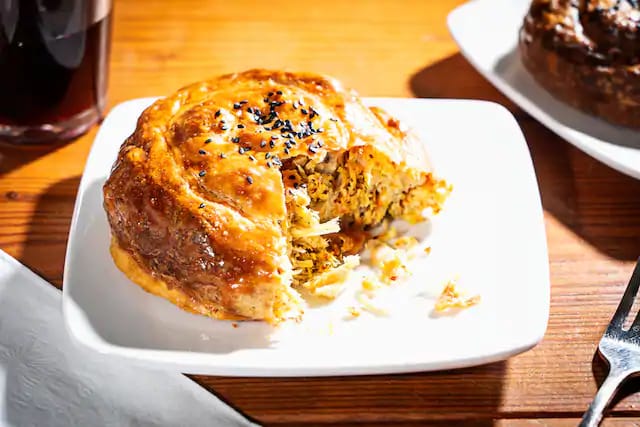 I claim not to have a serious sweet tooth. My eagerness to order takeout from Sharbat suggests otherwise. The crescent-shaped pastries called shekerbura, filled with crushed hazelnuts, sugar and cardamom, look more like something to admire as art than ravage with fingers and teeth. Their delicate stitching design is aided by a tweezer-like tool called maggash. Diced apples and walnuts go into the mutaki, whose filling you can spy through the slashes made in the baked dough, curved as a Slinky toy. The bakery’s simpler pleasures include a raised white sugar cookie with a sunny dot of yolk on the top.

Sharbat does pleasing dumplings, too. The gurza, rippled like the bakery’s walls and filled with juicy minced beef, come with swabs of tangy Greek yogurt and a thick tomato sauce. Throw in a crisp green salad of your own design, and you have a fine supper.

Through her daughter, Safarova says she hopes her hard-won debut business in Washington adds to a better idea of what she refers to as a little and relatively unknown country. With all due respect to Azerbaijan’s ambassador, he has competition in Sharbat.

This article originally appeared in Washington Post on 26 Feb 2021.