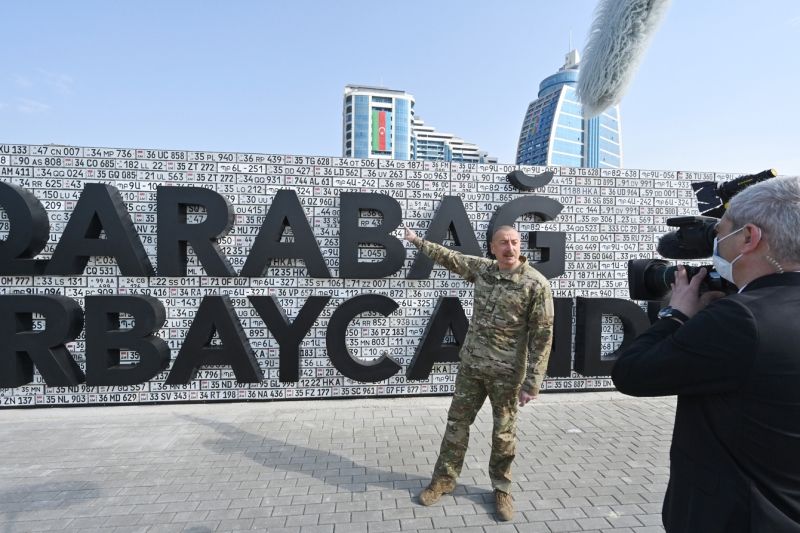 Thunderer Mars and the Dove of Peace

On April 12-13, President Ilham Aliyev used two information platforms to convey his vision of the further development of the Karabakh conflict settlement process, according to Azerbaijan in Focus, reporting Turan News.

On April 12, he acted as the thunder of Mars in front of the veterans of the Second Karabakh War at the opening of the War Trophy Park in Baku. The next day, he held out a branch of peace in the circle of the advanced expert community at the conference “A New Vision at the South Caucasus: Development and Cooperation in the Post-Conflict Period” at the English-speaking university ADA.

At the first meeting, Aliyev emphasised the justification for disabling the military phase of the settlement of the Karabakh conflict, and sent preventive messages to the forces cherishing revenge against Azerbaijan. In this context, he emphasised the inadmissibility of the formation of a new military Armenian-Russian tandem, mentioning the topic of the use of “Iskander-M” missiles in the last year’s 44-day war, which is vulnerable to the Kremlin. President Putin has to keep the defensive on the “Iskander” issue and at the same time take measures to resolve the situation, taking into account bilateral interests, on which the expansion of the scandal or the satisfaction of the parties depends.

Aliyev skilfully uses this issue to prevent further military cooperation between Armenia and Russia to the detriment of Azerbaijan’s interests, and seeks to get more constructivism from Russia’s participation in the process of preparing a large Armenian-Azerbaijani peace agreement, which he hinted at during the conference at the ADA University.

Ilham Aliyev diplomatically expressed formal claims against the United States and the Minsk Group on the passive contemplation of the prevailing post-war realities in the region within the university walls, and actually invited the western side of the Minsk process to the beginning of the political Armenian-Azerbaijani dialogue, which he sees as follows:

1. Expansion of the communicative dialogue with those who already have experience (the transit of Russian gas to Armenia is carried out, the Armenians use the Azerbaijani 21-km Zangelan-Gubadly highway, the Russian peacekeepers use the delivery of goods to Karabakh by the Azerbaijani railroad).

2. Starting a dialogue with the involvement of civil society in order to develop the peace process. “We expect more from the civil society of Armenia … I believe that we should actively build bridges here and in Yerevan. … If Armenia has a positive signal and wants to establish contacts, we are ready to do everything in our power,” he said.

3. Solving issues of demarcation, delimitation of borders, interaction on other issues.

These are Aliyev’s first peace messages to international mediators after the war, as well as to Armenian and Azerbaijani societies, whose participation in the settlement of the conflict was frozen in the broad sense of the word after he came to power in 2003.

Aliyev’s theses were heard in Yerevan. “We need to talk about the future; the most important thing is the settlement of the Nagorno-Karabakh conflict. We must raise the issue of de-occupation of the territory of the Nagorno-Karabakh Autonomous Region. We must formulate this not as a military issue, but as a negotiated political issue,” Prime Minister Nikol Pashinyan said in parliament on April 14.

Pashinyan’s statement can be interpreted in such a way that Armenia recognises the status quo and is now ready to negotiate on the borders and status of the autonomous region, and not the republic, as it was before. He also stressed that Armenia stands for the opening of all regional communications.

The Minsk group, taking into account the disposition of the parties, stated that it is leaving the passive phase of contemplation into the active one. On April 13, the OSCE Minsk Group Co-Chairs (Igor Popov – Russia, Stefan Visconti – France and Andrew Shofer – USA) issued a statement: “The Co-Chairs urge the parties to resume high-level political dialogue under the auspices of the Co-Chairs as soon as possible. They reiterate their proposal to organise direct bilateral consultations under their auspices, so that the parties can jointly consider and agree on a structured agenda reflecting their priorities, without preconditions… In this regard, the Co-Chairs remind the parties of the requirement to ensure unhindered access and maximum flexibility of movement in terms of travel routes the co-chairs in accordance with their mandate and previous practice. ”

Thus, we can more confidently state the presence of consonant statements about the intentions of all parties to launch a real peace process.