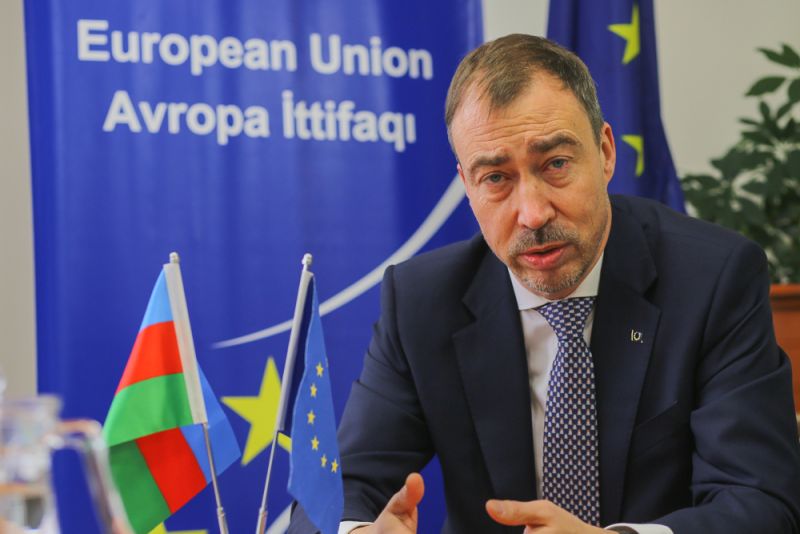 Toivo Klaar: The European Union Can Participate In Projects In the Liberated Territories And the Development Of Transport Links

According to Azerbaijan in Focus, reporting Turan News, the European Union has extensive ties with Azerbaijan, with its government and is ready for further cooperation to resolve specific issues and problems that arose in the post-war period. Answering if the EU intended to support economic projects in the liberated territories of Azerbaijan, Toivo Klaar, the EU special representative for the South Caucasus and the crisis in Georgia, stated the following:

“These questions are at the stage of discussion, on some issues we expect a response from the Azerbaijani authorities,” the diplomat said.

When asked when any concrete steps can be expected, Klaar said that the EU has already taken part, having allocated 6.9 million euros to international organisations for humanitarian programs in the liberated territories. In particular, the Red Cross received these funds to support people affected in the conflict zone.

As for the future, the EU leadership and the Azerbaijani Foreign Ministry are negotiating the allocation of additional funds in the coming months for other areas. “We are ready for this, but we need to come to an agreement with the Azerbaijani authorities,” Klaar said.

In response to the question about any specific proposals made by Baku to the European Union, Klaar said that for several years now the European Union, together with the World Bank, has been implementing the “Peace Building Assessment” program, which implies solving the needs in the post-war period.

“We have received such a request, are working on it and will come back to discuss how to implement all this,” said Klaar.

Answering a question about the possibility for the EU to participate in the implementation of regional transport projects, including the construction of a railway between Azerbaijan and Nakhchivan, Klaar said that this topic was raised at a meeting with President Ilham Aliyev.

“The European Union is very interested in supporting projects for the integration of the region. It is important for us to understand how we could participate or be useful in such processes. In particular, it can be transboundary water supply projects between Armenia and Azerbaijan. We are also interested in supporting and participating in transport projects and will discuss this with the Deputy Prime Minister and Foreign Minister of Azerbaijan,” Klaar said.

He added that these issues are being discussed between three parties – Azerbaijan, Armenia and Russia. The EU is not present there, so it is necessary to have more information and understand how Brussels can help, the diplomat said.

Answering a question about the opinion of the European Union on the matter of statements from the Armenian side on the restoration of the railway from Azerbaijan to Nakhchivan and how it is not beneficial for Armenia, the diplomat said that new transport routes and connections are good. They should be designed with respect for the sovereignty of each country. In any case, this is a positive step because roads are opening, people are free to move around, the economy is developing. “It also helps to improve mutual understanding, develop contacts between people,” said Klaar.