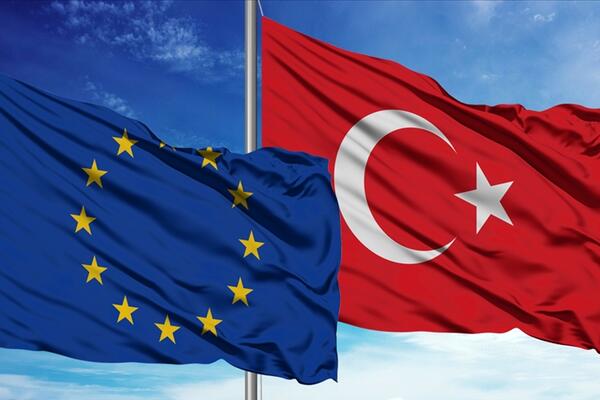 The EU officials are expected to discuss new steps to return to a positive track in EU-Turkey ties, by relaunching high-level political dialogue, starting negotiations on the modernization of the 25-year-old Customs Union, and by renewing the 2016 EU-Turkey refugee deal to fund more for Turkey’s hosting of millions of Syrians.

“We are ready, with the European Council, with member states, to put more concrete proposals on the table in order to have a more stable, more predictable relationship with Turkey,” EU Spokesperson Barend Leyts said last week.

His statement came following a virtual EU leaders’ summit on March 25-26 during which they discussed a report on the future of Turkish-EU relations, prepared by the EU’s foreign policy chief, Josep Borrell, and the European Commission and decided to continue negotiations on a constructive agenda.

The European Council’s conclusions stressed the de-escalation in the eastern Mediterranean and the resumption of the Turkish-Greek dialogue as positive steps and pledged to start the implementation of what it calls the positive agenda, including the modernization of the Customs Union and the renewal of the migrant deal of 2016.

However, it also stressed that the improvement in all these fields is subject to continued de-escalation in the eastern Mediterranean. “We call on Turkey to abstain from renewed provocations or unilateral actions in breach of international law. Taking into account the Joint Communication, we reaffirm the determination of the European Union, in case of such action, to use the instruments and options at its disposal to defend its interests and those of its member states as well as to uphold regional stability.”

On March 30, Borrell called for the building of bridges between the bloc and Turkey.

“The EU has a strategic interest in the development of a cooperative and mutually beneficial relationship with Turkey,” he wrote on his blog dedicated to EU foreign policy.

The economy is one of the most important areas of cooperation since Turkish exports to the EU total 69.8 billion euros ($81.8 billion) and the country receives 58.5 billion ($68.6 billion) euros of its foreign direct investment from EU countries, according to Borrell.

He acknowledged that the bloc and Turkey have tensions over four main questions, namely the eastern Mediterranean, the Cyprus issue, regional conflicts such as Libya and Syria, and democratic standards.

“The old disputes deeply affect the security interests of the European Union and can no longer be considered just bilateral matters between Turkey and some member states,” he stated.

Turkey-EU relations gained new momentum in late 2019 after the Turkish seismic survey vessel Oruç Reis, which had been sailing for energy resources in the eastern Mediterranean, returned to port ahead of an EU leaders’ summit in December.

The bloc has been encouraged by conciliatory moves from Ankara over the past few months, including the resumption of talks with Greece over a disputed maritime border.

The tensions between NATO allies, Turkey and Greece, escalated in the summer with a military build-up after Turkey sent its research vessel Oruç Reis, escorted by navy frigates, into disputed waters. The move prompted Greece to also send its warships, and both countries conducted military exercises to assert their claims.

In late 2019, Ankara and Athens also stepped up for the dialogue and held meetings on political and military levels aiming for de-escalation in the eastern Mediterranean.

This article originally appeared in Hurriyet Daily News on 05 April 2021.