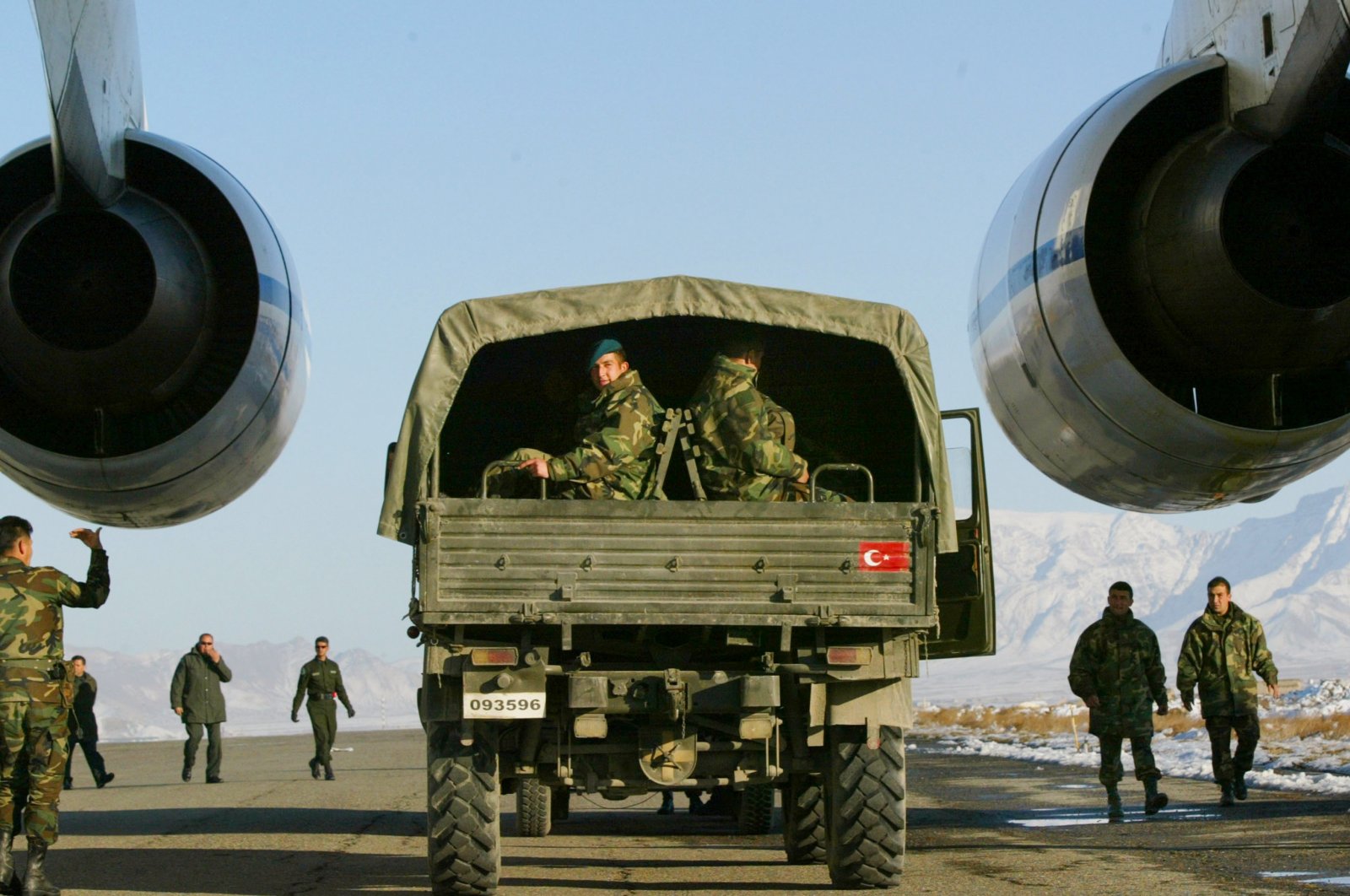 Turkish International Security Assistance Force (ISAF) soldiers are trucked to the tarmac getting ready to board a flight back to Turkey at the APOD military base located at the Kabul International Airport Feb.7, 2003. (Getty Images File Photo)

‘Turkey could play vital role in ensuring peace in Afghanistan’

Turkey could play a crucial role in bringing peace to Afghanistan due to its favored reputation in the war-torn country, political and security experts from three countries said Wednesday.

Speaking at a seminar on “Conversations on the Afghan Peace Process: Turkey’s Role in Afghanistan” organized by the think-tank the Institute of Strategic Studies Islamabad (ISSI), Pakistan’s former Foreign Secretary Aziz Ahmad Chaudhry said the situation in Afghanistan is very critical.

“We all know how critical it is that we have peace in Afghanistan. I think nobody knows more than the Pakistani government, its leaders and people that an unstable Afghanistan can be a nightmare for all the region,” said Chaudhry, who is also director general of the ISSI.

Turkey and Afghanistan have long-standing diplomatic relations that go back to 1920 and Ankara has been trying to find ways to start some kind of political process, he added.

Murat Aslan, a security expert from Turkey, said Ankara’s policies are based on a shared interest policy as opposed to one based on self-interest.

“Afghanistan’s interests lie in a peaceful stable country in order for any development projects to be realized,” he said.

“When I was in Kabul, I asked one question to several people – ‘How do you look to Turkey?’ And all of them gave the same answer: ‘Turkey is our brother,'” he recalled.

With Turkey’s proposal of a new trilateral mechanism involving Turkey for protecting Kabul’s airport after the U.S. pulls out of Afghanistan, Ankara-based defense expert Merve Seren suggested that Turkey’s presence in Kabul needs legal cover from the United Nations.

“Turkey’s presence in Afghanistan needs to be legitimized through a U.N. resolution and also the Afghan government to officially request Ankara to help the Afghan people,” said Seren, an assistant professor at Ankara Yıldirım Beyazit University.

“Turkey has to be there not only just because of the NATO issue, but I think we have a very big migration problem, [as] we are getting the most migration from Syria and then from Afghanistan,” she added.

Speaking to reporters on June 14 at the end of a series of meetings with NATO leaders on the sidelines of the alliance’s summit in Brussels, Belgium, Turkish President Recep Tayyip Erdoğan said Turkey was also seeking Pakistan and Hungary’s involvement in the new mission in Afghanistan following the departure of the U.S.-led NATO force.

“Turkey has evolved to play a reconstruction and capacity building role in Afghanistan. Therefore, Turkey is in the best position to play a potentially great role, which should be strongly encouraged,” said Pakistan’s former ambassador to Turkey Muhammad Haroon Shaukat.

Referring to the current situation in Afghanistan, experts said the political process is the only way to resolve things.

“With limited gains, Afghanistan is far from being stable, as it continues to be challenged by a plethora of problems, thus presenting challenges to the international community and the region,” said Amina Khan, director of the Centre for Afghanistan, Middle East and Africa at ISSI.

This article originally appeared in DAILY SABAH on 01 July 2021.