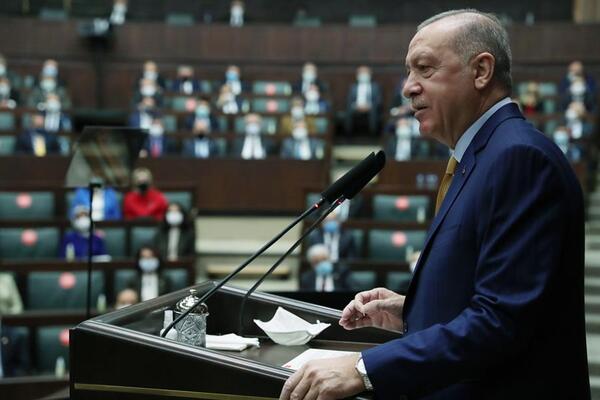 Turkey hopes to turn new page in ties with US, EU: Erdoğan

Turkey hopes to “turn a new page” in its ties with the United States and European Union, President Tayyip Erdoğan said on Dec. 23, noting that Ankara had been subjected to “double standards” by both its NATO ally Washington and the bloc.

“We believe that the new president of America, [U.S. President-elect] Mr. [Joe] Biden, will also pay due attention to Turkish-American relations. We have no prejudice, hostility or animosity toward anyone,” Erdoğan told lawmakers from his ruling Justice and Development Party (AKP).

Turkey hopes to open a new chapter in its relations with the EU and the U.S. in the new year, the president said.

“We do not view our versatile political, economic and military ties as an alternative to our well-established relations with the U.S.,” he said.

Erdoğan called on the EU to get rid of its “strategical blindness,” which is pushing Turkey away from the European pact.

He stated that “artificial agendas” have tested Turkey’s ties with the EU and the United States in 2020, but he hopes that things would improve.

“Turkey is facing double standards both over the eastern Mediterranean and the S-400s. We wish for the EU to rid itself of the strategic blindness that is plaguing it as soon as possible,” he said.

“To this day, we have gone running to those who took even a single step toward us. We maintain the same sincerity and optimism,” he said, adding that Turkey would continue to work for peace, justice and prosperity in the region.

On Dec. 14, the U.S. imposed sanctions on Turkey over its acquisition of the Russian S-400 missile defense system. The U.S. officials have voiced resistance to the deal, claiming the S-400s would be incompatible with NATO systems and would expose F-35 jets to possible Russian subterfuge.

The U.S. sanctions come at a delicate moment in the fraught relations between Ankara and Washington as Biden gears up to take office on Jan. 20, replacing Republican Donald Trump.

Meanwhile, the EU leaders have agreed to impose sanctions on an unspecified number of Turkish officials and entities involved in gas drilling activities in the eastern Mediterranean, but they have postponed further decisions such as trade tariffs or an arms embargo until they have consulted with the upcoming U.S. administration.

Meanwhile, a ruling by the European Court of Human Rights (ECHR) that has called on Turkey to immediately release Selahattin Demirtaş, the former co-leader of the Peoples’ Democratic Party (HDP), from prison has drawn a strong reaction from Erdoğan accusing the European court of issuing a political decision against Turkey.

The Grand Chamber of the ECHR said on late Dec 22 that the rights of Demirtaş had been violated under five different categories, including freedom of expression and liberty. It also stressed that Demirtaş’s pre-trial detention since November 2016 had sent a dangerous message to the entire population.

Demirtaş, who is charged with terrorism-related offenses, faces a sentence of up to 142 years in prison if convicted of “being the leader of a terrorist organization” over his actions during protests in 2014 that turned violent and led to the death of 37 people.

Ankara’s official reaction on the verdict was delivered by Erdoğan during his weekly address to his Justice and Development Party (AKP) MPs.

“The European Court of Human Rights cannot decide on behalf of our courts,” Erdoğan said, describing the Strasbourg-based court’s ruling as political and “two-faced.” The court made a ruling regarding Demirtaş without him having exhausted domestic judicial remedies, he suggested, slamming it for “making an exception” for the former head of the HDP.

“This move is purely political, and we know the reason behind it,” Erdoğan stated. The court’s ruling on Demirtaş is inconsistent with its verdict on Batasuna, a Spanish political party known as the political wing of the ETA terror organization, which underlined that non-condemnation of terror attacks could be considered as a support to terrorism, the Turkish president recalled.

“It’s hypocritical for a court, which has accepted that not condemning a terror act is a support to terrorism, to ask the release of the main responsible of an action that resulted in the brutal massacre of our 39 citizens on Nov. 6-8, 2014. If the ECHR wants to get respect from Turkey, it should question its inconsistencies,” he said.

Describing Demirtaş as “a terrorist under the disguise of a politician and responsible for the death of dozens of innocent people,” Erdoğan said the ECHR “should know that it now defends such a terrorist.”

“If it does not know this, then we’ll keep saying,” he added, saying Demirtaş was “guilty in the eyes of the people” not because of his political responsibilities and rhetoric but causing the death of dozens of people upon the instruction of the terror organization, namely the PKK.

“He is the murderer of Kobane, he is the murderer of our 53 youngsters in Diyarbakır. He is the one who called on my Kurdish brothers to take to the streets and he is responsible for their death. The ECHR, we’ll continue to tell these even though you don’t understand,” he said.

This article originally appeared in Hurriyet Daily News on 23 Dec 2020.