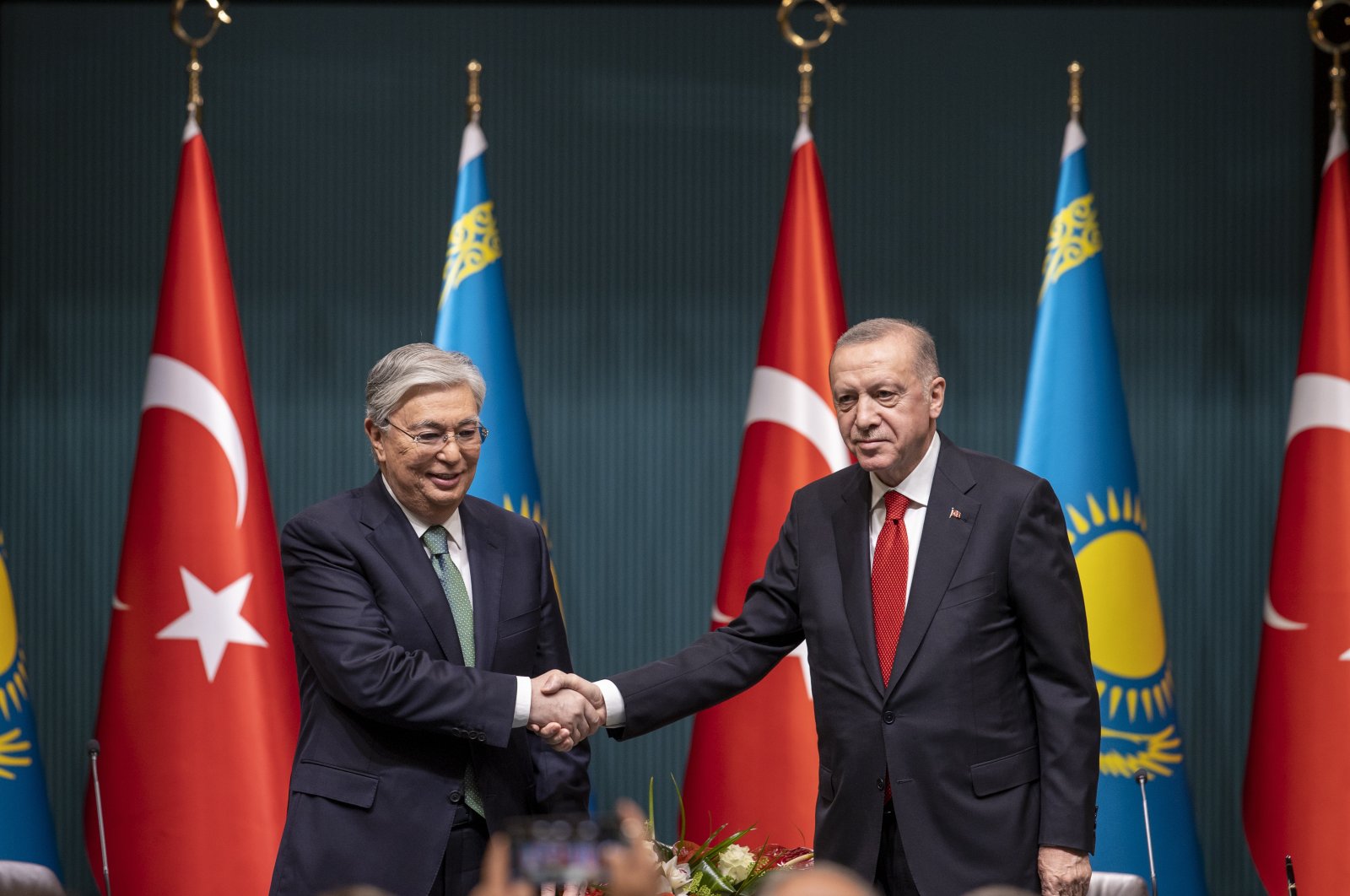 Turkey and Kazakhstan on Tuesday confirmed their determination to continue their solidarity on platforms such as the United Nations Economic Cooperation Organization and the Organization of Turkic States, according to Azerbaijan in Focus, reporting Daily Sabah.

Kazakh President Kassym-Jomart Tokayev on Tuesday arrived in Ankara, his first official visit to Turkey, which is expected to herald a new era in the two countries’ relations.

Speaking during a joint press conference alongside his Kazakh counterpart Tokayev, President Recep Tayyip Erdoğan stated that Turkey and Kazakhstan will reach their targeted $10 billion (TL 152.40 billion) bilateral trade volume as the volume doubled since the previous year.

“The trade volume between Turkey and Kazakhstan rose 58% from the previous year and exceeded $5.3 billion. Thus, we have quickly surpassed our target of $5 billion,” he said.

“Now, hopefully, we will reach the target of $10 billion just as quickly with the steps we take together,” he added.

Erdoğan added that he believes a meeting with Turkish-Kazakh businesspeople set for Wednesday will be “particularly beneficial in this respect.”

Stating that he discussed the Russia-Ukraine war with Tokayev as well, Erdoğan said: “Our views on peaceful resolution of Ukraine on the basis of sovereignty and territorial integrity coincide.”

On over a dozen agreements that were signed between the two nations ahead of the press conference, Erdoğan called them “steps that will further strengthen the foundation of our relations.”

For his part, Tokayev called Turkey “a very important strategic partner” for his Central Asian country.

He underlined that during the talks in Turkey, $1 billion worth of commercial pacts will be signed.

The visit comes as the countries mark 30 years since they established ties on March 2, 1992. It included a joint news conference between Tokayev and Erdoğan following an official ceremony at the Presidential Complex, the signing of various agreements and face-to-face and inter-delegation meetings. In addition to bilateral relations, the leaders exchanged views on current regional and international issues.

At the talks, the delegations discussed measures to increase the bilateral trade volume from the current $5 billion to $10 billion, as well as new opportunities to expand areas of cooperation.

Turkey was the first country to recognize Kazakhstan’s independence in 1991, with the two nations establishing diplomatic relations in a matter of months.

Ankara has also pioneered the establishment of the first diplomatic mission in Kazakhstan, opening an embassy in Almaty, then the capital of the Central Asian country.

Bilateral ties continue to develop in all areas, with the Kazakh Embassy in Ankara starting operations in October 1992.

Relations reached a high point with the signing of a strategic partnership agreement between the two nations in 2009. In 2012, they established a high-level strategic cooperation council.

The countries cooperate extensively in the fields of politics, economy, trade, investment, military, defense industry, education, and health, having since achieved significant progress in their 30 years of ties.

Furthermore, when mass protests shook the country in January, Turkey pledged solidarity with Kazakhstan. Dozens of protesters and at least a dozen security officers have died in clashes in Kazakhstan’s largest city and former capital Almaty in riots initially sparked by a hike in fuel prices.