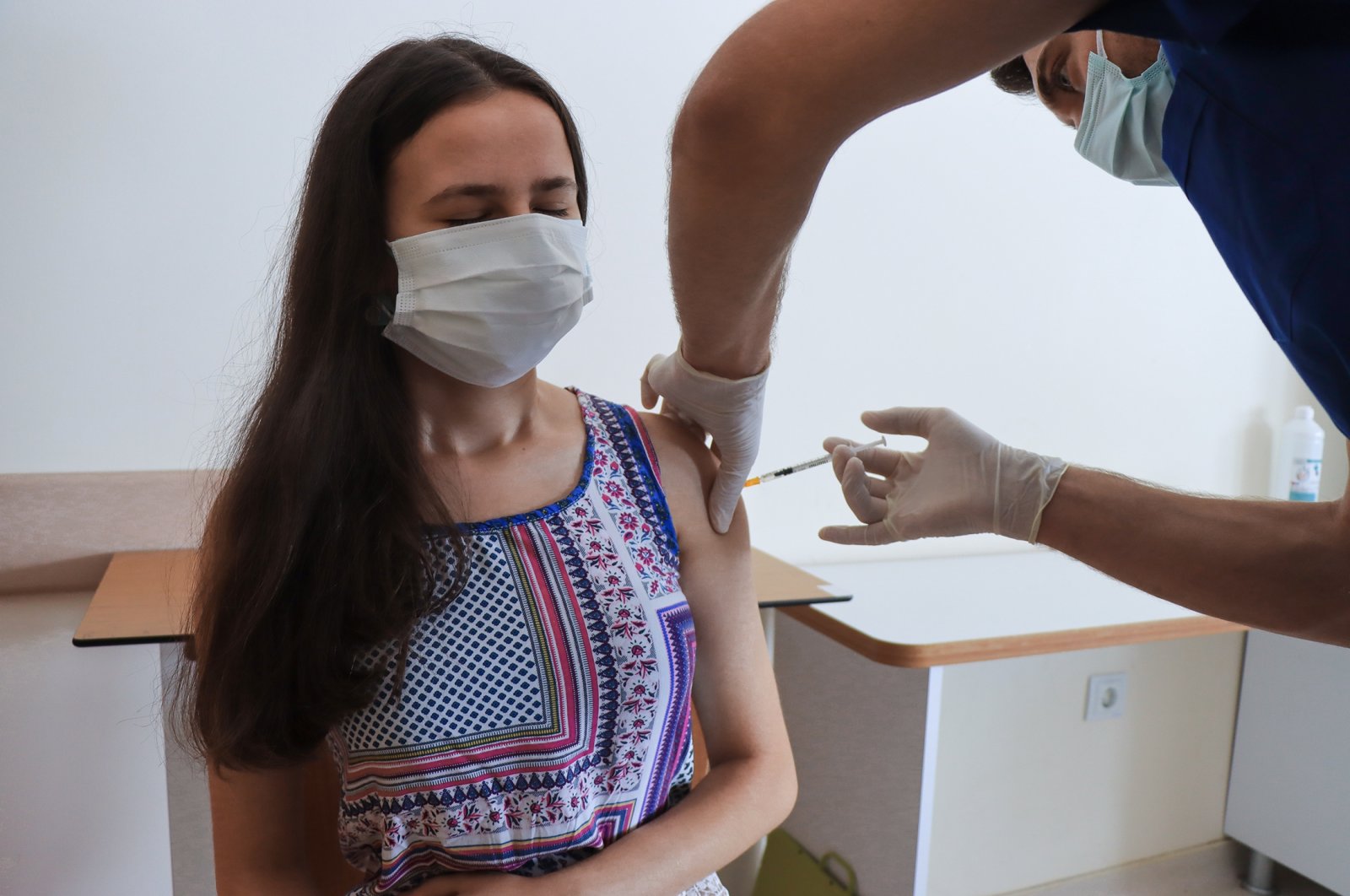 A woman gets vaccinated at a hospital, in Kırklareli, northwestern Turkey, Aug. 8, 2021. (AA PHOTO)

Turkey not planning COVID-19 restrictions prior to October

Turkey will not implement new restrictions against the COVID-19 pandemic, including curfews, at least until October but plans to tap the private sector to encourage more people to join the vaccination program.

As daily coronavirus cases fluctuate above 23,000, Turkey is seeking to boost its vaccination program and reach out to more people. The country is set to start the “civil initiative” phase to increase the vaccination numbers, enlisting the aid of nongovernmental organizations (NGOs), commerce associations and the private sector. As for restrictions that were scrapped in July, authorities do not plan to reintroduce them, at least until October, one month after the scheduled reopening of schools for in-person education.

The figures published Tuesday show that the country has administered more than 78 million doses in its vaccination program. This number includes more than 30 million people who are fully vaccinated.

The vaccination is the only weapon for the country against the pandemic that has claimed thousands of lives since March 2020. In a bid to give a lifeline to the economy and address the anxiety of millions confined to their homes, the government, encouraged by a steep fall in the number of cases, lifted restrictions and ordered the reopening of businesses like restaurants and cafes on July 1. This normalization process provided some relief to the public, but experts are worried that those refusing to wear masks and abide by social distancing rules are putting everyone in danger. The delta variant, which is spreading across the country, and some 20 million unvaccinated people endanger the gains in the fight against the pandemic.

Despite this, the government is expected to wait until October to impose new restrictions, a time when the number of cases increased substantially in 2020. The decision will likely be based on the pandemic figures that are expected to be affected by the reopening of schools and by more people spending time indoors with a drop in temperatures.

In parallel with its normalization process, Turkey also expanded the scope of its vaccination program by including every citizen at the age of 18 and above and obtaining more vaccines from China’s Sinovac and Pfizer-BioNTech.

No harsh restrictions are expected to be implemented; instead, authorities are planning a controlled process of restrictions and more strict enforcement of current rules on mandatory masks and social distancing.

Businesses, from restaurants to gyms and shopping malls, which were affected by months of closure due to the pandemic, naturally oppose a return to restrictions. To resolve this issue, the government plans to ask them to implement their own measures. Some companies have already announced plans to disallow unvaccinated workers from entering workplaces while others, from factories to malls, are expected to implement affirmative action measures for the vaccinated. It is unclear whether the public sector, which has about 3.5 million employees, will adopt similar measures.

Inoculation is not mandatory in the country, but the government is reportedly considering restrictions for the unvaccinated. Health Minister Fahrettin Koca had announced earlier this month that they may ask for weekly polymerase chain reaction (PCR) tests from people without two doses of vaccine, in order to greenlight their travel in buses and planes and attendance to events in seated venues, like cinemas and concert halls.

Experts long voiced a 70% rate of immunity among the public as a sufficient level to eliminate the cycle of infections. However, the delta variant changed the calculations and experts say the mass immunity rate needs to be increased to at least 80% now.