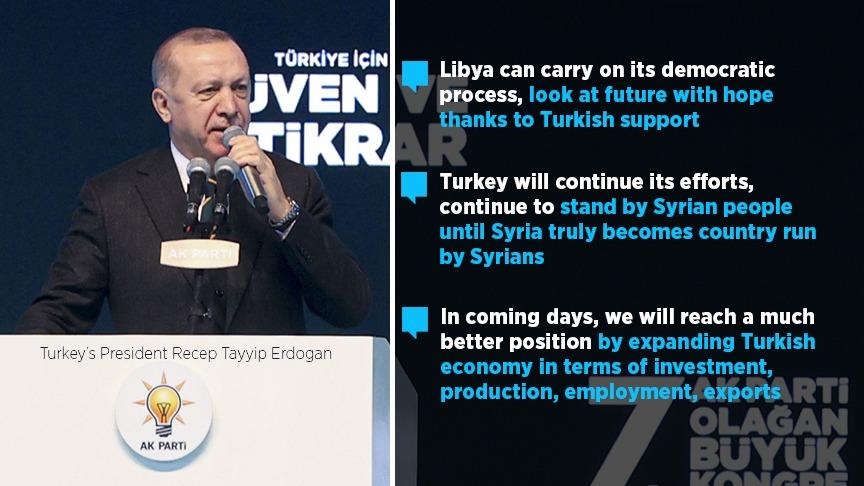 ‘Turkey not to turn its back on East or West’

With its geographical location bridging multiple continents, Turkey to remain in contact with both ends of world: President

Turkey is going to maintain its active foreign policy in various geographies and stand with oppressed nations in line with its national and international interests, the country’s president said on Wednesday.

Speaking at the 7th Grand Ordinary Congress of the ruling Justice and Development (AK) Party in Ankara, President Recep Tayyip Erdogan commented on various issues such as Turkey’s development since the early 2000s, financial issues, and foreign policy.

With its geographical location “located at the heart of Africa, Asia, and Europe,” Turkey does not have the luxury to turn its back on either East or West, Erdogan said, adding Ankara would set its foreign policy while protecting national and international rights of his country.

Stressing that Turkish assistance to Libya changed the course of the fate of war-weary people there, Erdogan said Libya could now carry on its democratic process and look at the future with hope.

While Turkey remains one of the most-affected countries in the context of the Syrian civil war, which made Turkey the world’s top refugee-hosting country with over 3.6 million displaced Syrians, the Ankara administration aims to stand with Syrians, the president noted.

“Turkey will continue its efforts, continue to stand by Syrian people until Syria truly becomes a country run by Syrians,” he added.

Touching on the recent fluctuations in the market, Erdogan said they do not reflect the potential of the Turkish economy.

The president urged citizens to put their gold and foreign currency assets into use with economy and production, while calling on international investors to trust in Turkey’s strength and potential.

“In the coming days, we will reach a much better position by expanding the Turkish economy in terms of investment, production, employment, and exports,” Erdogan noted.

Touting to the tourism sector, one of the country’s main sources of income, Erdogan stressed that Turkey closed 2020 with 16 million tourists and $12.4 billion revenue amid the coronavirus pandemic.

“We will continue proceeding through the target of 75 million tourists in the coming period,” he added.