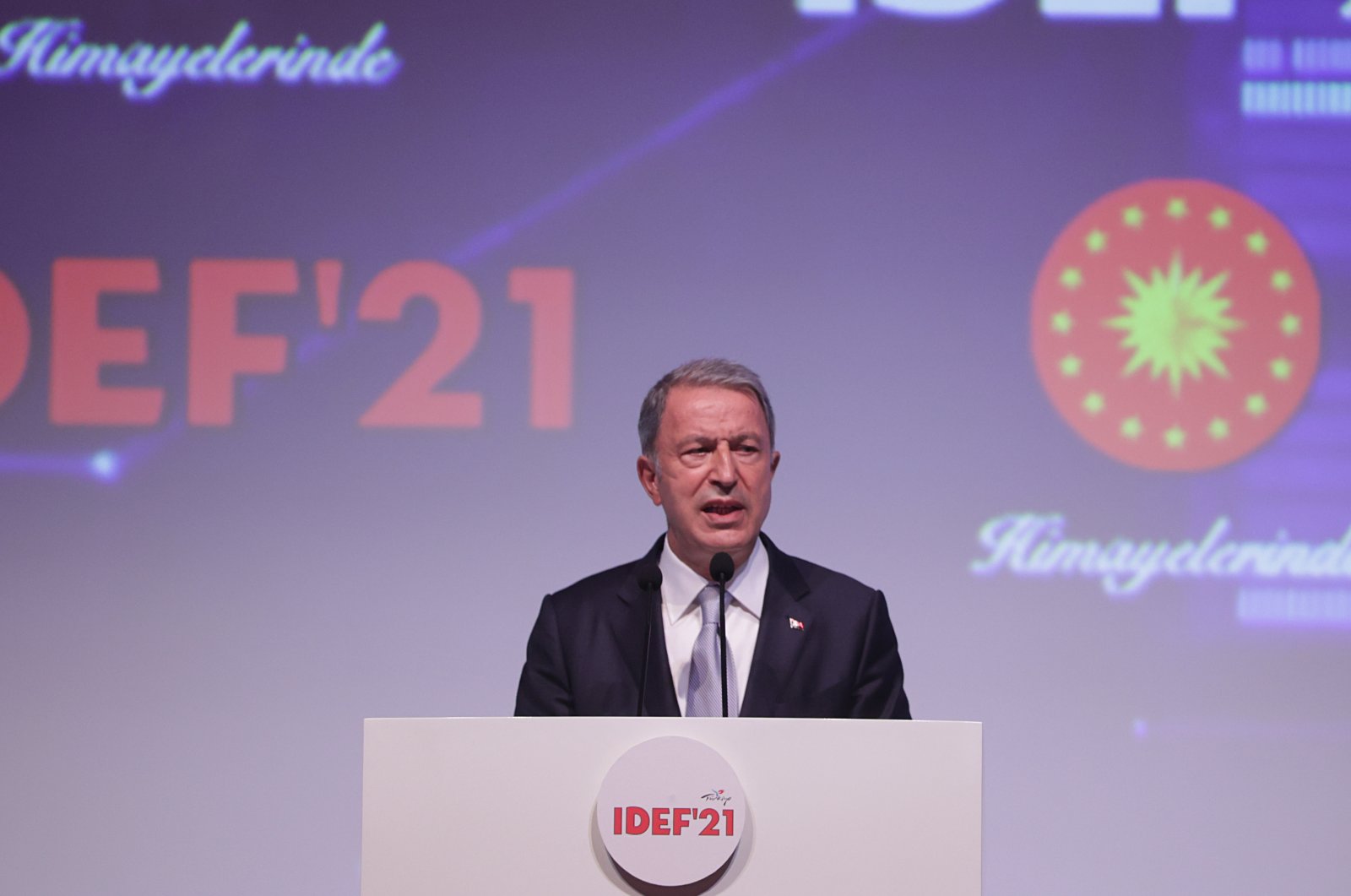 Relevant ministries and institutions are in preparations for a mandate in the event Turkish soldiers are to stay in the Afghan capital Kabul, Defense Minister Hulusi Akar said.

Speaking to Daily Sabah in an exclusive interview on the sidelines of the International Defense Industry Fair (IDEF 2021) in Istanbul, Akar said, “if necessary, parliament can be called for an extraordinary meeting.”

Akar explained that Turkish soldiers stationed at Kabul Hamid Karzai International Airport are safe and are carrying out their duties. Regarding the chaos that broke out at the airport when the Taliban entered the capital, the minister said that people entered the airport because the locally contracted personnel left their positions.

“This situation lasted for 24 hours, then elements of the Turkish Armed Forces (TSK), the United Kingdom, U.S. and some local Afghan elements prepared the runways for flights. Currently, they (the Afghan people) do not want to leave the airport, they see the airport as a safe place, a shelter and are waiting,” Akar highlighted.

He said that Turkey took all kinds of precautions and is prepared to evacuate its military personnel if necessary, while Turkish citizens are also being evacuated.

Reiterating that Turkey will stay in Kabul only as long as the Afghans want, Akar underlined that Ankara has no secret agenda.

Ankara has offered to guard and operate Kabul’s airport after the U.S. and NATO withdrawal from Afghanistan. Questions remain on how security will be assured along major transport routes and at the airport, which is the main international gateway to the capital, Kabul.

Turkey has been in Afghanistan in a noncombat role for 20 years and has been involved in consultancy efforts, reconstruction and maintenance. It has been operating the airport for six years.

“What is important are our Afghan brothers, the rights and interests of our people and country and our moral values. Within this scope, Turkey is talking with the relevant institutions. We are receiving positive signals; however, if something goes wrong and we see a problem, we will leave the country in 24 hours,” Akar highlighted. Akar further stated that currently there is no other country than Turkey that wants to shoulder the mission.

Speaking on the current situation at the airport, Akar said that it operates without problems, as evidenced by the 146 flights made in the past four days. On reports that gunshots were heard at the airport, the minister said that the shots were made to disperse the crowds and that those who lost their lives were because of stampedes.

The Turkish Embassy in Kabul, he said, is continuing its work at the airport while the Turkish flag is still flying over the embassy building as it has not come under fire.

“We spoke with the German and British defense ministers, NATO and the U.S., they said they are ready for cooperation and support Turkey’s presence there,” he said. 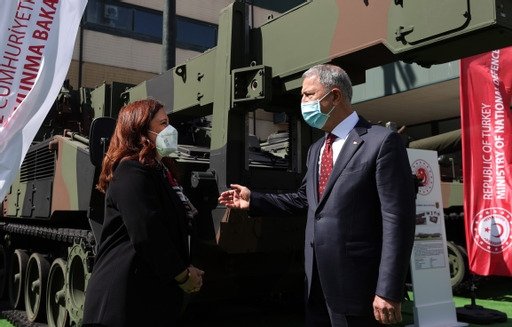 Closer to home, Turkey has recently seen an increase in refugees, particularly from Afghanistan.

Concerns have risen over a possible spike in refugees from Afghanistan due to the U.S. pulling out of the country after two decades.

Video footage has shown large groups of refugees in the area near the border with Iran, though the Turkish government says that there has not yet been a surge in numbers.

Akar praised the efforts of security forces controlling the borders and reminded that he visited the Turkey-Iran border last week to inspect the measures taken against irregular migration.

“We have taken physical measures. There are trenches that are 4 meters (13 feet) deep and 4 meters wide, modular walls, pits behind them and wires. 587 people have been caught trying to cross through the Iran border since Jan. 1, 2021 – this means around two people a day,” Akar said, refuting claims that 50-60 people pass to Turkey daily.

He added that the claims of tens of thousands of migrants crossing into Turkey do not reflect the truth. Akar said that a factory that casts molds and immediately makes walls was established close to the border. The wall construction on the entirety of the Iran border is now 65% complete.

He said that footage showing Afghan refugees in big groups is not from the Iran border and that the footage is intended to create skewed perceptions among the people.

On claims that Iran lets Afghans pass over to Turkey, Akar said that Turkey contacted Iran and has received assurances from Tehran that it is not the case.

“We do not see big crowds and movements at the borders,” he reiterated.

Trenching work, as well as the construction of the modular wall and high-tech observation towers to prevent illegal activity, is underway on the Turkish-Iranian border.

While nine Turkish battalions have been serving at 44 posts to ensure security, a battalion, two expeditions and five divisions have been deployed in the region along with 35 task forces and 750 special operations police officers in armored vehicles.

Drones and helicopters are also used by security forces to keep the region under control.

Turkey is not a pit stop for migrants, President Recep Tayyip Erdoğan said recently and added that the country is taking the necessary steps to avert an irregular migration crisis due to the situation in Afghanistan.

On the situation in Syria, Akar said that the biggest problem is the PKK terror group’s Syrian wing, the YPG.

“We can solve the S-400 and F-35 issues with the U.S. somehow, but we cannot get anywhere without solving the YPG. Unfortunately, our ally still provides them with arms, equipment and ammunition,” he said.

Akar said that it would be more advantageous for the U.S. to cooperate with Turkey in the Middle East instead of with a terrorist group.

The U.S. has primarily partnered with the YPG in northeastern Syria in the anti-Daesh fight. But Turkey strongly opposes the terrorists’ presence in northern Syria, which has been a major sticking point in strained Turkey-U.S. relations. Ankara has long objected to the U.S.’ support for the YPG, a terrorist group that poses a threat to Turkey and terrorizes local people, destroying their homes and forcing them to flee.

Under the pretext of fighting Daesh, the U.S. has provided military training and given truckloads of military support to the YPG, despite its NATO ally’s security concerns. While underlining that a country cannot support one terrorist group to fight another, Turkey conducted its own counterterrorism operations, over the course of which it has managed to remove a significant number of terrorists from the region.

Akar underlined that the PKK is still receiving aid in all fields including training, but regardless, the Turkish military is fighting them effectively.

“The terrorists cannot stay two nights in a row at the same place. They constantly change their location,” he said.

The tensions with Greece was another issue on the agenda of the minister, who strongly underlined that Turkey has no problem with the Greek people.

Akar said that areas of disagreement between the two countries are territorial waters, airspace, the situation and militarization of the islands in the Aegean in violation of agreements, and maritime jurisdiction.

“The number of retired Greek soldiers, politicians, diplomats and academics supporting our views has increased – this is important,” he noted.

He also criticized Greece for entering into an arms race with Turkey.

“Do not expect to get the upper hand against the TSK with a couple of secondhand planes and ships. Entering into such an adventure while having so much foreign debt is against the welfare of the Greek people,” he stated.

Greece has earmarked 11.5 billion euros ($14 billion) for the modernization of its armed forces over the next five years, at a time of increased tension with neighboring Turkey.

Relations between the two NATO members, often strained, deteriorated sharply last year, with warships facing off in the Eastern Mediterranean in a dispute over maritime boundaries and energy rights.

Delivery of the 18 Rafale jets – 12 currently in service in France and six new planes to be built by Dassault Aviation – is scheduled to begin midyear and to be completed over two years. The jets and the purchase of compatible air-to-air Meteor missiles are expected to cost 2.3 billion euros ($3.4 billion).

This article originally appeared in DAILY SABAH on 22 August 2021.