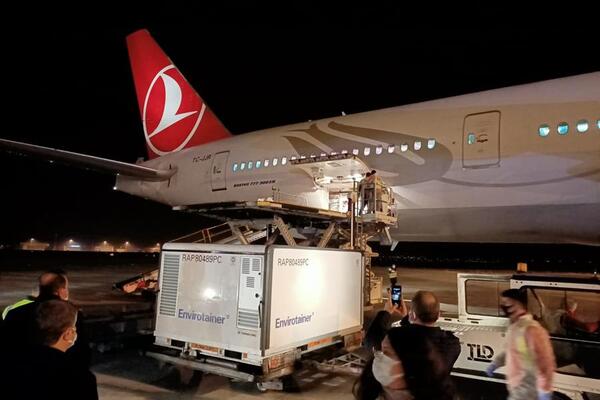 A plane carrying the first batch of 3 million doses of a COVID-19 vaccine ordered from China’s Sinovac Biotech arrived in Ankara in the early hours of Dec. 30.

Turkish Airlines’ Boeing 777 plane, which departed from Beijing with 17 containers of vaccines, landed at the capital’s Esenboğa Airport at 5:44 a.m. local time.

Announcing the arrival of the vaccines on Twitter, Health Minister Fahrettin Koca said vaccination will start following 14 days of tests.

“As soon as the tests are completed, our vaccination program will take place under the coordination of the General Directorate of Public Health. We will succeed together,” he added.

Koca said previously that Turkey would be receiving 50 million doses of the Sinovac vaccine and that the first 20 million doses would be delivered during December and January 2021.

The minister also announced that the country will purchase up to 30 million doses of another vaccine developed by German-based biotech firm BioNTech.

Vaccinations will not be mandatory for now, and Turkey aims to convince the public about the necessity of vaccination against the coronavirus, making mass vaccination possible.

Ankara plans to roll out the mass vaccination program starting with health care workers and those older than 65 with chronic illness. In the second stage, the jab will be administered to those working in crucial sectors and high-risk environments, such as military personnel, police officers, teachers, academic staff, judicial personnel and those working in the food and logistics industries.

In the next stage, people aged between 50 and 64 and those younger than 50 with chronic illnesses will be vaccinated. The rest of the population, aged between 18 and 49, will get the shot in the final state of the vaccination program.

“The lists for vaccination appointments are presently being prepared,” Professor Levent Akın from the Health Ministry’s Science Board told daily Hürriyet.

The vaccines will be administered at hospitals and the sites designated by local health boards, Akın said, adding that inoculation works are ongoing.

He noted that the main warehouse to store vaccines is located in Ankara, which even has freezers to keep any vaccine at minus 70 degrees Celsius.

The Chinese vaccines can be stored in standard refrigerator conditions at 2-8 degrees Celsius, said Professor Mustafa Necmi İlhan from the Health Ministry’s Social Sciences Board.

People will be administered two doses of the vaccine, he added.

Turkey has registered more than 2.17 million confirmed COVID-19 cases, while the death total from the outbreak has surpassed 20,000.

This article originally appeared in Hurriyet Daily News on 30 Dec 2020.