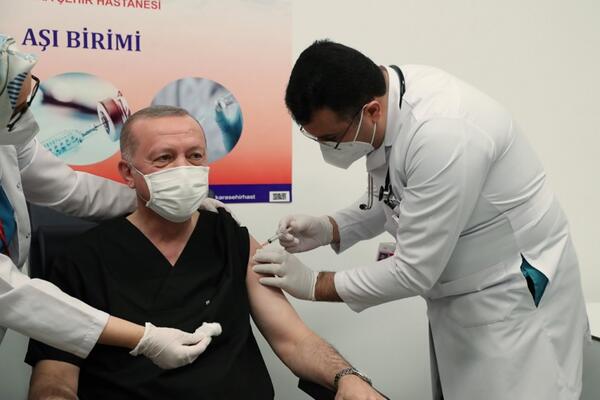 Turkey has begun administering nationwide vaccinations against COVID-19 starting with more than 1 million health care workers after authorities approved the emergency use of vaccine developed by China’s Sinovac.

Health Minister Fahrettin Koca and members of the Health Ministry’s Science Board were the first ones to receive the shots of the injection live on TV on Jan. 13.

“I believe the days ahead of us will be bright. For us to return to our old lives, we absolutely need to get the injection,” Koca said, urging the public to get vaccinated.

COVID-19 vaccination is not mandatory in Turkey.

The vaccine will be distributed fairly, and there will be no other practice other than the priority set by the Science Board, the minister said.

The Health Ministry has launched a website, which provides real-time information on the number of people vaccinated.

The vaccination drive will be carried out in four stages.

Firstly, the vaccine will be administered to health workers, including pharmacists, and those older than 65. In the second round, the vaccine will be administered to those older than 50 and people working in crucial sectors, such as the Defense Ministry, the Interior Ministry and the Justice Ministry, along with teachers, and those working in the food and logistics sectors.

In the third phase, people under 50 with chronic diseases as well as young adults will be vaccinated, and the final phase will cover the rest of the population.

People in each category are required to make an appointment to get the shot. Each individual will be as-signed vaccine doses by name with a barcode.

The vaccine will be administered in two doses, 28 days apart.

The injections have been delivered to public health storage facilities in all of Turkey’s 81 provinces, Koca stated.

Three million doses of the vaccine produced by Sinovac reached Turkey on Dec. 30 and were transferred to a medical storage facility of the Health Ministry.

The samples of the vaccine were then taken to a laboratory run by the official drug and medical equipment body called the Turkish Medicines and Medical Devices Agency (TİTCK) for a testing period of 14 days, after which it gave the go-ahead signal for emergency use of the vaccine on Jan. 13.

Turkey will be receiving a total of 50 million doses of the Chinese vaccine.

In an earlier statement, Koca said that 4.5 million doses of the vaccine developed jointly by Germany-based BioNTech and Pfizer will be sent to Turkey by the end of March 2021.

Under a deal signed with BioNTech Turkey could have access to up to 30 million doses.

“We’re determined to administer the vaccine and comply with measures and restrictions until the pandemic comes to an end,” Koca said.

This article originally appeared in Hurriyet Daily News on 14 Jan 2021.