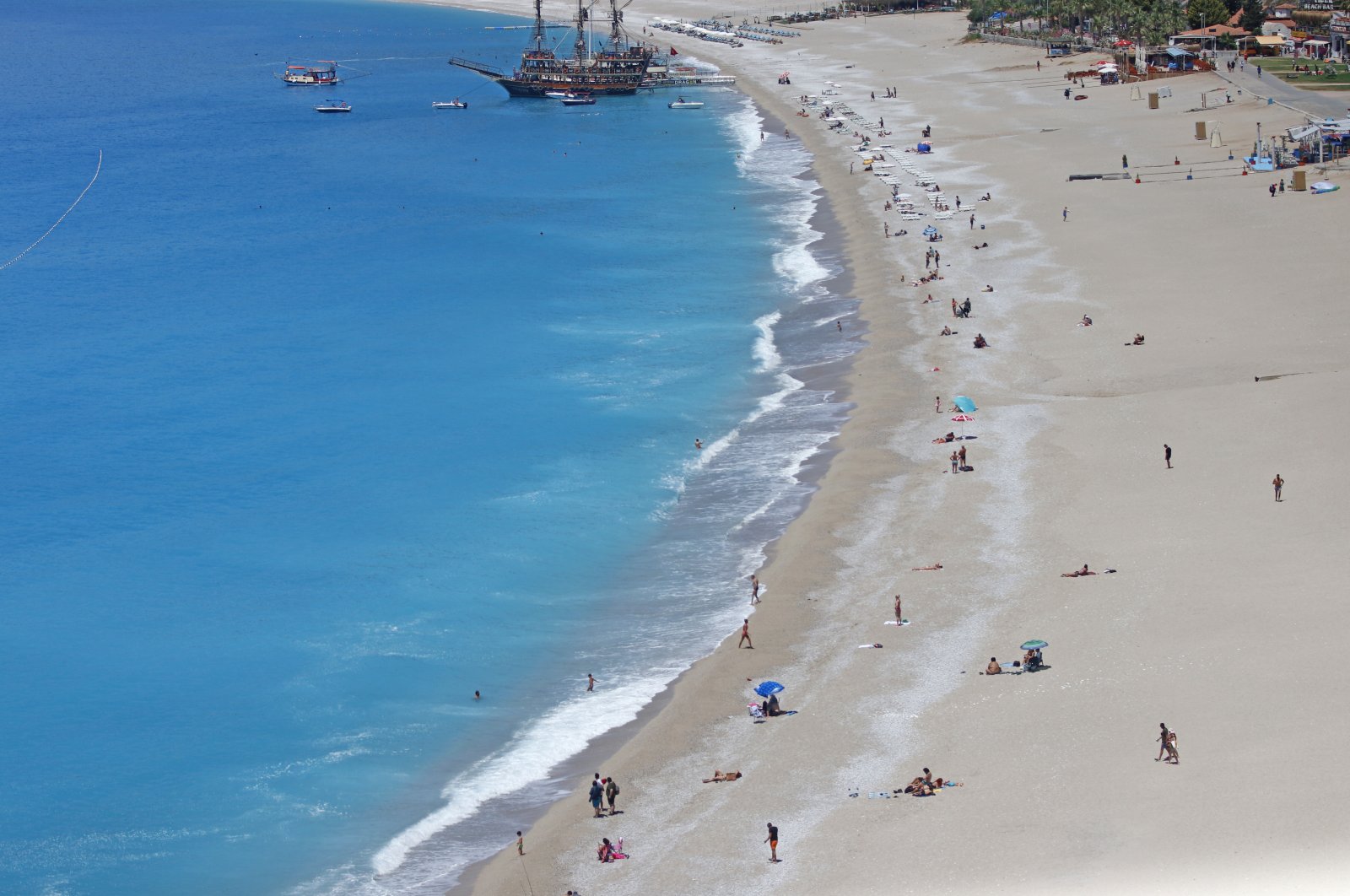 People are seen on a beach in Fethiye, Muğla province, southwestern Turkey, May 17, 2021.

Adelegation led by Turkey’s culture and tourism minister, Mehmet Nuri Ersoy, departed for Moscow on Monday to discuss with their counterparts the restrictions on flights imposed by Russia, Turkey’s top source of visitors.

The visit comes as Ankara eased coronavirus restrictions Monday amid a decline in new COVID-19 cases following a nearly three-week lockdown, offering some hope for the key summer tourist season.

Earlier reports said that Foreign Minister Mevlüt Çavuşoğlu and Ersoy were ready to visit Moscow in May for talks on the pandemic situation in order to address Russia’s concerns and to provide all the necessary information.

The country’s top source of visitors last month suspended most air travel until June, citing rising COVID-19 infections. Only two flights per week are allowed on a reciprocal basis between Moscow and Istanbul.

Ankara said Moscow’s decision to halt most flights blocked the plans of 500,000 tourists who had hoped to visit during the April to June period.

Turkey welcomed 2.1 million Russians last year and some 6 million in the year before the pandemic.

The government declared a full nationwide lockdown last month until May 17 to curb rising infections and deaths and to help save the tourism season and the flow of foreign currency it brings, which is critical to offset the current account deficit.

Turkey in late April announced it had signed a deal to acquire 50 million doses of Sputnik V vaccine that will start arriving this month. The shipment is expected to be completed within six months.

The country has granted an emergency use authorization for the Russian jab. The Russian Direct Investment Fund (RDIF), which is responsible for marketing Sputnik V, said last month a Turkish firm would also produce the shot at its plants.

Around 10.8 million people in Turkey have been fully vaccinated, or 13% of the population, with 14.9 million having received a first dose.

The country started easing its strict lockdown on Monday by allowing movement during the day while keeping overnight and weekend curfews in place. Foreign visitors are exempted from curfews.

President Recep Tayyip Erdoğan said on Friday that Turkey would gradually ease out of the full lockdown and lift restrictions more significantly as of June.

Most travel restrictions have been lifted, but people will have to remain at home between 9 p.m. and 5 a.m. during weekdays and from Friday evening until Monday morning, aside from meeting basic shopping needs, according to an Interior Ministry decree on Sunday. Restaurants will only be open for food deliveries.

The surge in cases has threatened to hit Turkey’s lucrative summer tourism season and the U.K., one of its most important tourist sources, placed it on its travel red list.

This prompted the switch of the Champions League final from Istanbul to Portugal, while Formula One called off the 2021 Turkish Grand Prix on Friday.

On Saturday, May 16, Turkey ended a requirement that tourists from 14 countries, including the U.K., provide a negative virus test to enter. But it removed Israel from the list of exempted countries after accusing it of conducting crimes against humanity amid its severe attacks on Palestinians in Gaza that led to civilian deaths.

Though foreign arrivals were down 54% year-on-year in the first quarter, Ersoy has said a sharp drop in coronavirus infections since April 21 was a hopeful sign.

The minister said the country would open the tourist season as of June 1 and that they could maintain their target of 30 million foreign visitors this year, twice as many as last.

The daily arrivals have dropped to just over 5,000 as of May amid Russia’s flight restrictions, and arrivals from Europe came in below expectations, Yavuz told Demirören News Agency (DHA).

Some 30 planes brought in around 6,000 tourists from Ukraine alone as of May 16, he added. More than 10,125 tourists arrived in Antalya on 53 flights since Sunday.

Tourism revenues dropped 65% last year as visitors brought in only around $12 billion (TL 100.41 billion) as global travel ground to a halt, down from a record $35 billion in 2019. The tourism industry accounts for up to 12% of Turkey’s economy.

The country has set itself the target of completing the vaccination of all tourism industry employees by the end of May.

This article originally appeared in DAILY SABAH on 17 May 2021.