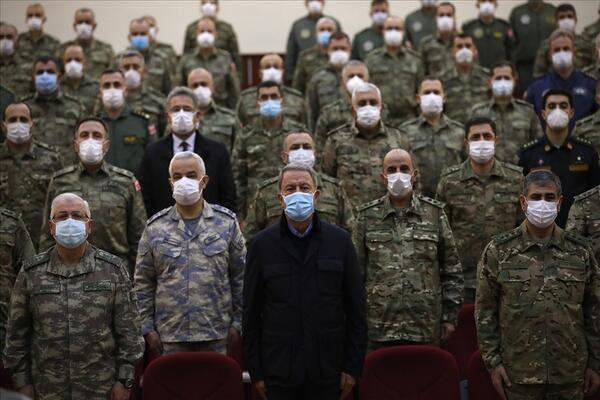 Turkey urges Armenia not to breach ceasefire in Nagorno-Karabakh

President Recep Tayyip Erdoğan has urged Armenia not to attempt to violate the ceasefire in Nagorno-Karabakh in an address to Turkish troops deployed in Azerbaijan to jointly monitor the implementation of a deal between Baku and Yerevan.

Akar paid a snap visit to Azerbaijan on the last day of the year to visit the Turkish troops and hold talks with his Azerbaijani counterpart, Zakir Hasanov.

Erdoğan highlighted the historic victory of the Azerbaijani troops in liberating the occupied territories from Armenia in 44-day long clashes, reiterating that Turkey and Azerbaijan are “two states, one nation.”

“Your presence there is a sign of honor indicating the level of the relationship between our countries. As Turkey, we are supporting Azerbaijan’s struggle in the field and in all international platforms,” he said.

‘We are ready to monitor truce’

For his part, Akar underlined that the brotherhood between Turkey and Azerbaijan is unbreakable and that everybody should understand it and not make wrong calculations.

Recalling that the ceasefire agreement between Armenia and Azerbaijan stipulates the formation of a joint center by the Turkish and Russian troops to monitor the truce on the field, Akar said, “Our friends are ready to fulfill this mission.”

The Turkish and Azerbaijani forces continue to cooperate on clearing mines and improvised explosive devices in the areas abandoned by the Armenian army, the minister stressed.

“We only fight against the terrorists or the soldiers. We are not like the ones carrying out massacres in Hocalı or launching missiles to the cities of Azerbaijan,” he said, adding, “Our activities will get intensified once the Joint Center begins to work. We will fulfill our mission to defend the rights of our Azerbaijani brothers by the joint work of Turkish-Russian troops.”

Works are continuing to build the Joint Center in Aghdam province of Azerbaijan where the Turkish and Russian forces will monitor and inspect the implementation of the ceasefire. Turkey has already dispatched the first batch of troops to Azerbaijan.

This article originally appeared in Hurriyet Daily News on 31 Dec 2020.