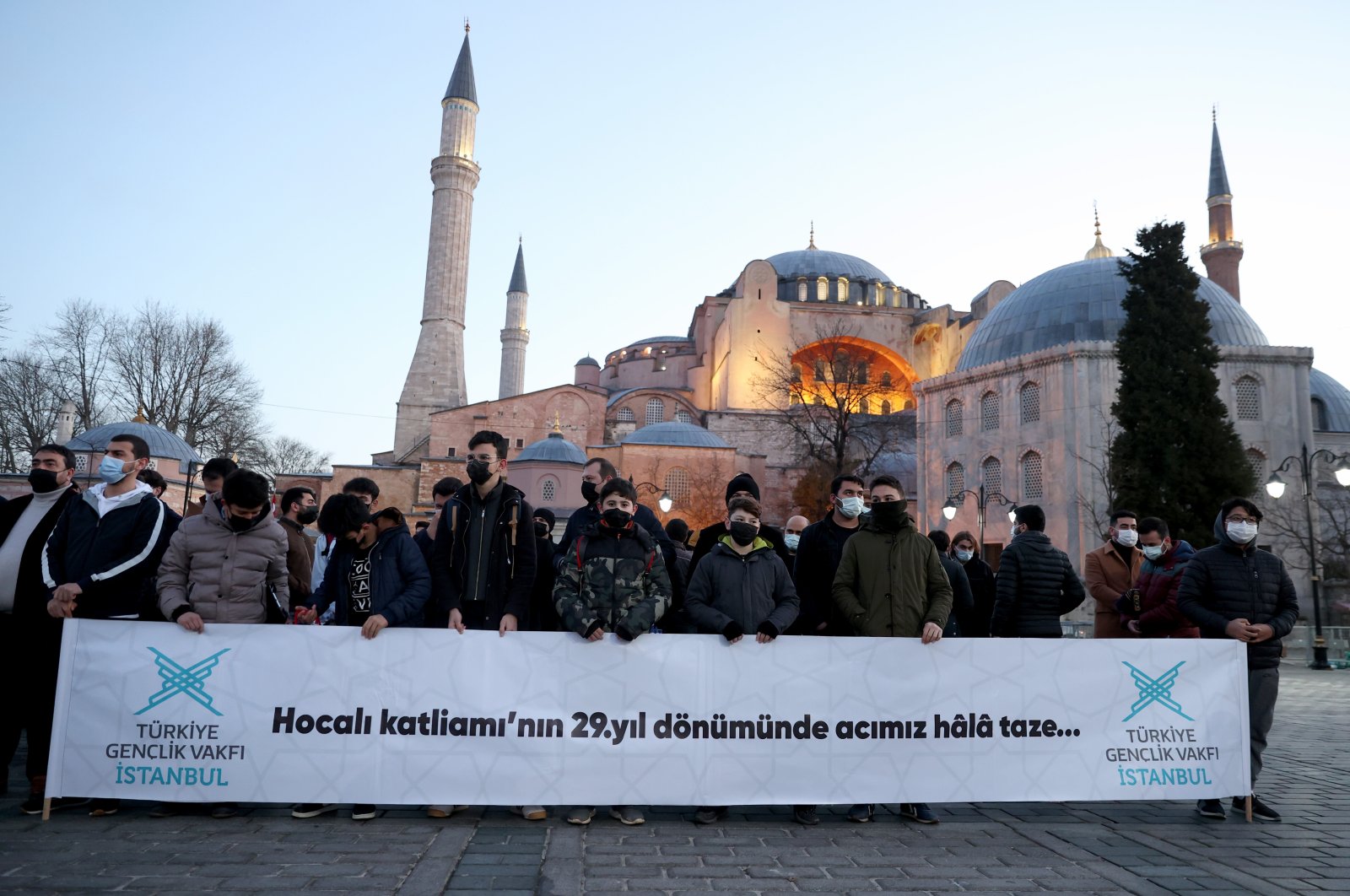 The Turkey Youth Foundation (TÜGVA) on Friday commemorated the victims of the Khojaly Massacre in front of Hagia Sophia Grand Mosque.

The event took place after morning prayers at the iconic Istanbul mosque and it was attended by TÜGVA head Enes Eminoğlu, Azerbaijani deputy Nagif Hamzayev and the Azerbaijan Youth Foundation’s Ferit Cafarov among others.

In his speech, Eminoğlu said that the massacre is one of the darkest stains in human history and that as a foundation, TÜGVA will continue to inform and raise awareness about the tragedy among young people.

TÜGVA’s Istanbul Representative Emrullah Şanlan said that 29 years ago, Armenia violated every law of war and committed genocide before the eyes of humanity.

“Armenians, who were not satisfied with only land occupation, massacred the local people – including children, women and elderly – brutally tortured prisoners, committing one of the bloodiest massacres of the 20th century,” Şanlan added.

On Feb. 26, 1992, with the Soviet Union newly dissolved, Armenian forces took over the town of Khojaly in the occupied region of Nagorno-Karabakh after battering it with heavy artillery and tanks and assisted by their infantry.

A total of 613 civilians were killed by Armenian soldiers in Khojaly, a strategically important settlement originally inhabited by 7,000 people. The attack killed 106 women, 63 children and 70 elderly people. The massacre is seen as one of the bloodiest atrocities by Armenian forces against Azerbaijani civilians in the region, which was mostly liberated by Baku last fall after decades of occupation.

Some 487 people, including 76 children, were critically injured, while 150 of the 1,275 Azerbaijanis the Armenians captured during the massacre still remain missing. Eight families were completely wiped out, 130 children lost their fathers and some 25 children became orphans in the massacre. According to investigations launched by the Azerbaijani government and based on expert statements and the testimonies of 2,000 survivors, Armenian forces tortured their captives by burning them alive; slaughtering them; peeling off their scalps; cutting off their ears, noses and sexual organs and removing their eyes, alongside mass killings.

Marking the 29th anniversary of the Khojaly Massacre, Azerbaijan’s President Ilham Aliyev said his country has avenged the victims by liberating the occupied territories in Karabakh from Armenia.

This article originally appeared in DAILY SABAH on 27 Feb 2021.