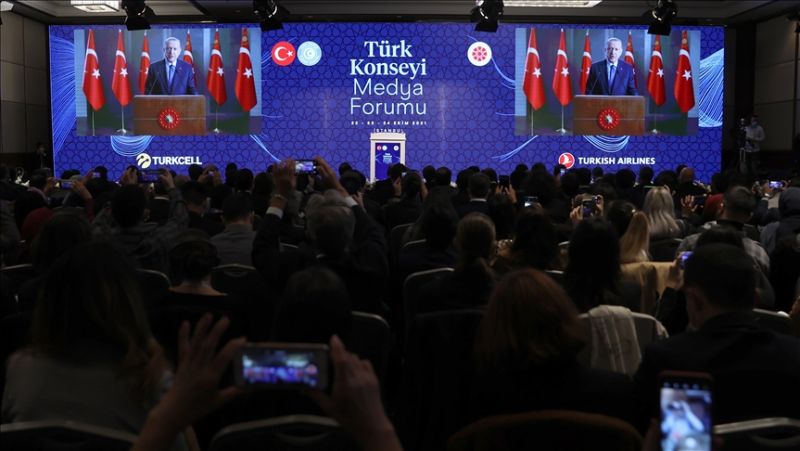 Turkish President Recep Tayyip Erdogan, addressing via video link to the participants of the Media Forum of the Turkic Council (Cooperation Council of Turkic-Speaking States/CCTS), called on the Turkic-speaking countries to jointly resist the flow of lies and disinformation.

The forum on the topic “Fundamental past, strong future”, organized by the Liaison Office of the Presidential Administration of Turkey, was held in Istanbul on October 22-24 and became a platform for a number of messages from the Turkish leader both to his allies in the Turkic world and his enemies.

The forum will discuss the possibilities of developing cooperation in the field of the film industry and the media, as well as a joint fight against disinformation, including in social networks.

Here is what the Turkish state agency Anadolu reports:

The President of Turkey noted that today lies and distorted messages inflict an irreparable damage to the reputation, traumatize and lead to dramas of millions of people around the world.

“Uncontrolled social networks have become a source of threat to democracy, society and national security of states. Our countries must form an independent information system and media, just as Turkey is doing today in the defense and military spheres. “

According to the Turkish leader, the events of the 44-day war in Karabakh, when well-known Western media outlets ignored the crimes of the Armenian Armed Forces and rocket attacks on peaceful cities of Azerbaijan, became a clear manifestation of “digital fascism”.

“The double standards in the information sphere, which we witnessed during the 44-day war in Karabakh, confirmed the importance of the topic of combating disinformation and lies for all our countries. The Armenian Armed Forces fired ballistic missiles at the cities of Azerbaijan, committed massacres, but the bloody crimes were hushed up and were not covered by the international media. Media structures claiming the importance of freedom of speech and the objectivity of coverage of events, in fact, acted as an analogue of the official news agency of Armenia. The Karabakh war is neither the first nor the last example of an information embargo that our countries will have to face”.

Turkic-speaking countries must independently eliminate threats in strategic areas, including in the field of media and information, Erdogan emphasized.

Fahrettin Altun, head of the Liaison Office of the Presidential Administration of Turkey, went even further, saying that Turkey would not allow the formation of a fifth column under the pretext of freedom of speech.

Turkey perceives the “industry of lies” deployed against Turkey and friendly countries in the media and social networks as a threat to national security, said Fahrettin Altun, head of the Liaison Office of the Turkish Presidential Administration.

“The flow of disinformation and lies is financed by separate foreign circles and structures. We will not allow the formation of the fifth column under the pretext of freedom of speech,” Altun said.

According to him, the Turkic-speaking countries should form a healthy joint information platform, excluding any encroachments by “cyber-imperialists”.

“Ankara is ready to continue to contribute to the elimination of challenges to the image of the Turkic-speaking states, to actively fight the flow of misinformation,” continued the representative of the Turkish leader’s administration.

The position of the Turkish leader turned out to be consonant with the position of other Turkic states, including Russia, where the Turkic ethnos ranks second in the demographic scale after the Russians in terms of press freedom and disinformation.

And this is no coincidence. In the World Press Freedom Index, Turkic-speaking states, including Russia, are presented in an unattractive way. The situation is best with Kyrgyzstan – 79 points, which puts the country in the ranks of problem states. Turkey (153 points) and Kazakhstan (155) were among the countries where the situation is bad. The situation is very bad in Uzbekistan (157), Azerbaijan (167), Turkmenistan (178). Russia is among the bad countries (150).

The World Press Freedom Index, which assesses press freedom annually in 180 countries and territories, shows that journalists, the main vaccine against the disinformation virus, are seriously hampered in 73 of the 180 countries in the ranking, and restricted in 59 more countries. There is a total of 73% of the countries assessed.

Blocking journalism is identified by the Index, which measures restrictions on access to information and barriers to news coverage. By these criteria, Reporters Without Borders recorded a flagrant deterioration in performance. Journalists are faced with “denial of access” to information on the ground, as well as to sources of information, due to or under the pretext of a health crisis.

“The best vaccine against disinformation is journalism,” says Christophe Deloire, Secretary General of the RBG. “Unfortunately, this work and dissemination of information is too often blocked by political, economic, technological and sometimes even cultural factors. Faced with the virality of misinformation spreading across borders, across digital platforms and social media, journalism is the key to ensuring that public debate is grounded in a variety of established facts.

As an example of the prejudiced attitude of the other world towards the Turkic world, Erdogan cited the 44-day war in Karabakh. But this example does not hold water. The media in Turkey, like those of other Turkic-speaking states, paid little attention to what was happening in Azerbaijan and, moreover, did not express a position of solidarity, as social networks demonstrated. The dissonance between the approach of the media to the Karabakh problem and social networks in the Turkic countries was striking. This phenomenon is precisely hidden in the lack of freedom of the media of the Turkic-speaking states and the freedom of social networks. The media, which are controlled by the governments in these states, expressed the view and approach of the authorities, which at that time in the Central Asian republics were rather restrained and cautious. In social networks, which are more viewed as platforms for expressing public sentiments, the topic of war and support for the Turkic brothers in Azerbaijan was much higher. Which naturally leads to the opinion that if there are free media expressing public relations in these countries, coverage of events in Azerbaijan would be more active and truthful, as Mr. Erdogan wants.

It is interesting that in Turkey, where the government actively demonstrated itself as a party to the conflict, which was expressed in the comprehensive support of Azerbaijan, the media more than coolly covered the Karabakh theme, if to look at the essence from the vociferous platform of the idea of ​​“Two states – one people”.

It follows that the fight against disinformation can only be successful if there is freedom of speech and free media. And Turkey, which is interested in neutralizing disinformation, needs to become an example of freedom of its press and lead this movement in the Turkic information space.

The issue of information interaction, exchange, which is understood as solidarity, has been in the Turkic world since the collapse of the USSR and the establishment of the Cooperation Council of Turkic-speaking States in 1992 and the International Organization of Turkic Culture (TURKSOY) in 1993. But as the participants in this process themselves admit, the problem of information cooperation remains unresolved to this day, despite the signing of bilateral and multilateral documents on cooperation between the media of these countries.

On September 5 this year, in the capital of Kazakhstan, the city of Nur-Sultan, the International Turkic Academy held a round table “Mass media in Turkic countries. Development of cooperation in new conditions ”. It was noted that “there are difficulties in the exchange of information between the Turkic countries and often the exchange of information is carried out through the media of third countries.”

That is, for 29 years, the Turkic information interaction continued to live with the same problems as at the dawn of the independence of the Soviet Turkic republics. From this experience it follows that this state will continue to live in the future if the media of the Turkic-speaking states do not receive the freedom that the Turkic communities have and develop in social networks not controlled by the government.

This article originally appeared in TURAN INFORMASIYA AGENTLIYI on 23 Oct 2021.