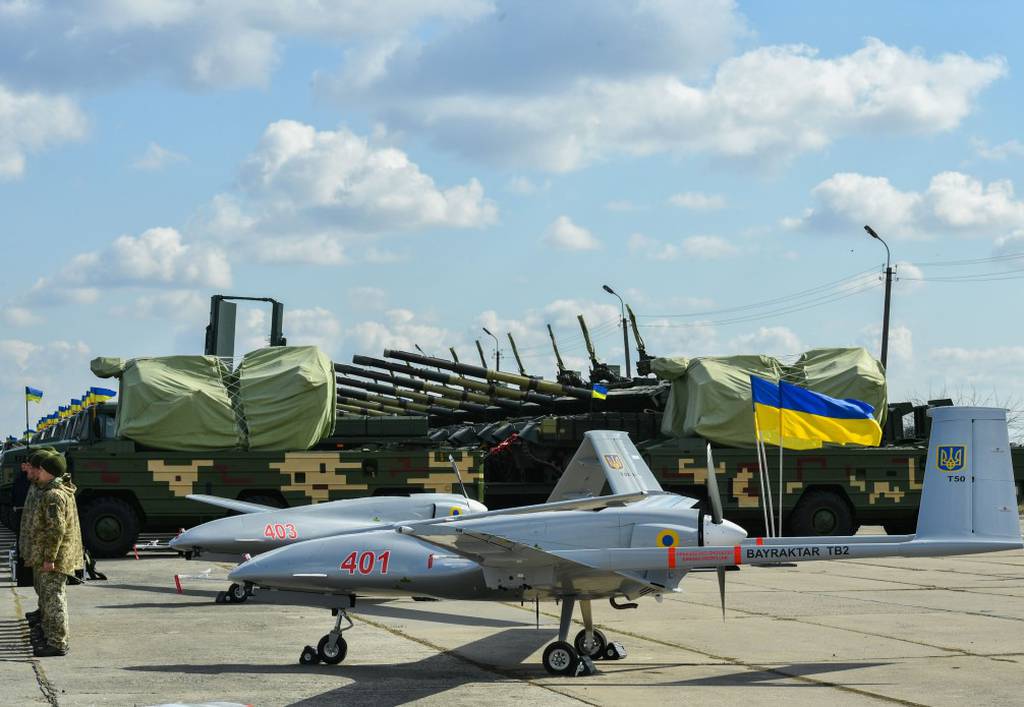 Turkish drones have become a symbol of the Ukrainian resistance

“Those shiny tanks are being set ablaze — Bayraktar — that’s the new craze,” go the lyrics of a popular Ukrainian song dedicated to a drone that has become one of many symbols of the nation’s resistance.

The “Bayraktar” has become so popular that Ukrainians are now naming their pets after the Turkish-made drone. Last month, the mayor of Kyiv announced that a newborn lemur at the city’s zoo would be named Bayraktar and the foreign ministry tweeted a photo of another Bayraktar, a puppy at the Kyiv police dog training center.

Western and Ukrainian officials have praised Turkey’s Bayraktar TB2 drones for playing a part in countering Russian attacks. Last month the British defense secretary Ben Wallace reportedly told UK lawmakers the drones were “delivering munitions” onto Russian “artillery and their supply lines.” He added that was “incredibly important” to slow down and block the Russian advance.

The TB2, a medium altitude long endurance (MALE) drone, has been operational for years. It’s been in use by the Turkish military in northern Iraq and Syria since 2014. More recently it has been credited with helping tip the balance in conflicts like Libya and Nagorno Karabakh. But videos released recently by the Ukrainian military showing its strikes against Russian military targets have gone viral, putting it in the spotlight again.

According to Bendett, the drone performed as expected but it is not “invulnerable.” Open-source evidence suggests some may have been shot down by the Russians.

The drones “are part of the Ukrainian social media campaign that is executed very well by the Ukrainian military and civilians,” he said. Videos of Bayraktar strikes went viral on social media and that is “a great morale booster … [and] a great tactical victory.”

The TB2 and other unmanned aerial vehicles (UAVs) being developed in Turkey have put the country on the drone map, along with the US, China and Israel, Bendett said.

Turkey, which maintains close defense and economic ties with both Russia and Ukraine, has been cautious about touting what has arguably become one of its most famous exports. The drone sales had been a major irritant for Russia long before its invasion of Ukraine; Vladimir Putin’s spokesman Dmitry Peskov warned late last year that the Turkish drones would have a “destabilizing” impact in the region.

A high-level Turkish bureaucrat told reporters on Friday that Russia has repeatedly complained to Ankara about drone sales to Ukraine. “They used to complain before, they are complaining right now, but we have already given the answer… these are [from] a private company and this purchase had been done before the war,” he told a foreign media briefing.

Ukraine was the first country to purchase the TB2s in 2019 and has ordered at least 36 drones so far. Last month, its defense minister announced the arrival of a new shipment of the drones.

Selcuk Bayraktar, the chief technology officer of Baykar Technologies, is more keen to talk about his drones’ technology than politics. He also happens to be the son-in-law of the Turkish president, who has emerged as a key mediator between Russia and Ukraine in the war.

Bayraktar has heard the song dedicated to his namesake drone and knows the social media phenomenon it has become in Ukraine, but he measures his words carefully when discussing Ukraine.

“I think it is one of the symbols of resistance, it gives them hope,” Bayraktar, an engineer and graduate of the Massachusetts Institute of Technology, told CNN during a rare tour of the drone production facility in Istanbul last week.

“People are resisting and defending their homeland from an illegal occupation and … if you want independence you have to be able to stand up and resist and I think that’s what the brave people of Ukraine and leadership has done,” he said. “At the same time, you need technology, you need your own indigenous defense capacity, but when people’s lives are on the line… I don’t want to compare that to any sort of technology.”

On display is the “Kizilelma” (Red Apple), Turkey’s first unmanned fighter jet, which has just hit the production line and is named after the Turkish mythologic expression that symbolizes the ideal — the goal one wants to reach. Bayraktar said it is expected to begin flying next year.

Industry experts say factors such as cost are what make the drones appealing.

“[The] Bayraktar TB2 offers an almost perfect price and combat efficiency balance [and] has an affordable unit cost,” said Dr. Can Kasapoglu, Director of Defense Research of the Turkish Center for Economics and Foreign Policy (EDAM). “TB-2’s competitors in the weapons market are more expensive, come with more bureaucratic and political hurdles for procurement, or come with uncertain supply sustainability.”

The drone is also combat-tested which is a crucial criterion in arms transactions, he said.

“When the music stops, TB2s are likely to inflict more damage on the adversary than they take,” Kasapoglu added. “This is of critical importance, especially for NATO’s eastern flank”.

Baykar Tech has signed contracts with at least 19 countries, most of which were signed in the past 18 months. Among the buyers is Poland, the only EU and NATO member to have ordered the UAVs.

Turkey’s defense and aerospace industry registered more than $3 billion in exports last year, a record, according to the country’s state-run news agency.

“It is important to strengthen defense and aviation exports to countries with whom Turkey has strategic relations,” Haluk Bayraktar, Baykar’s CEO and younger brother of Selcuk, told the Anadolu news agency in January. “Beyond providing an economic gain, defense exports also provide a suitable basis for establishing strategic relations with the countries to which you export.”

For Selcuk Bayraktar, this is not only a family business and a lifelong passion for engineering. He said this is about ensuring his nation’s independence and technological self-sufficiency.

This report originally appeared on CNN News on April 11, 2022.
CATEGORIES War in Ukraine