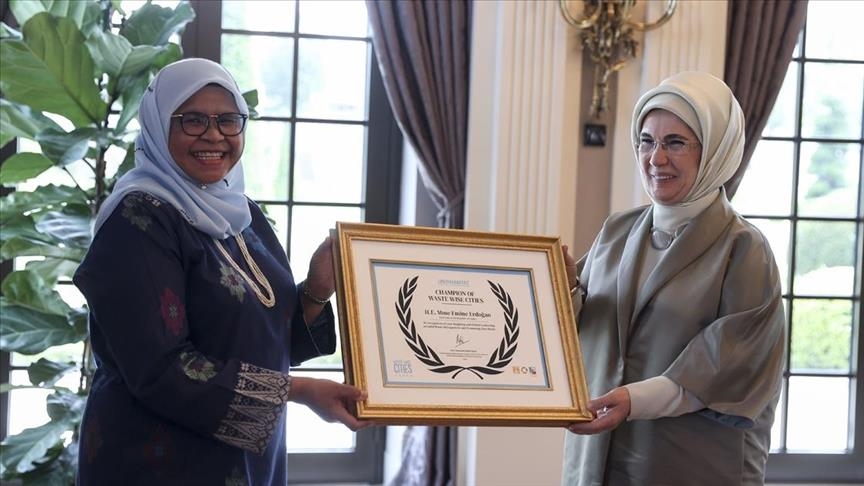 Turkey’s first lady received the Waste Wise Cities Global Champion award from UN-Habitat on Wednesday for her efforts towards creating a healthy environment.

At a ceremony in the capital, Ankara, Maimunah Mohd Sharif, executive director of the United Nations Human Settlements Programme (UN-Habitat), presented the award to Emine Erdogan for her contributions to the Waste Wise Cities initiative and healthy environment as well as Turkey’s Zero Waste Project that she led.

Praising the Zero Waste Project, Sharif said Erdogan’s contributions in connection with the issue should set an example.

Mentioning the Waste Wise Cities initiative that was launched to address the global waste crisis, she noted that 200 cities around the world have taken part in the project so far.

Climate change is one of the biggest challenges of our time, and its negative effects are increasingly felt in both social and economic life. We see that climate change affects especially the most vulnerable groups in the world, she noted.

Noting that it was her pleasure to announce Emine Erdogan as “Waste Wise Cities Global Champion,” Sharif also thanked the first lady for her “inspiring efforts and inspiring global leadership” in waste management and the Zero Waste Project

Speaking at the ceremony, Erdogan said that Turkey and UN-Habitat will forge strong cooperation towards achieving a green environment.

“We believe that the Waste Wise Cities initiative will contribute significantly to the goal of cities in harmony with the environment and nature. We are determined to contribute to the success of this initiative,” she noted.

Saying that she accepted the award on behalf of the Turkish youth, Erdogan mentioned that the sensitivity of youth to environmental issues is a harbinger of good days to come.

“It is a fact that nature is an inseparable and indivisible whole. The borders between countries do not apply to nature. All humanity pays the price of the crime committed against nature within the borders of a country,” she stated.

The first lady went on to say that the current generation is the last generation that can eliminate the climate crisis.

“Therefore, our burden and our responsibility are very heavy.”

During the program, environmental activists shared their future expectations with Erdogan as they wrote down their wishes and demands regarding the environment on paper and conveyed them.

At the end of the program, Erdogan, Sharif and Turkey’s Environment Minister Murat Kurum had a conversation with young people who participated in the ceremony.

In 2025, total global waste is expected to reach 2.2 billion tons from the current 1.3 billion tons, according to the World Bank.

Also, the project brought 17 billion Turkish liras ($3 billion) to the Turkish economy from June 2017 to the end of 2020. The average USD/TRY exchange rate was 5.55 during the period.

This article originally appeared in Anadolu Agency on 03 June 2021.