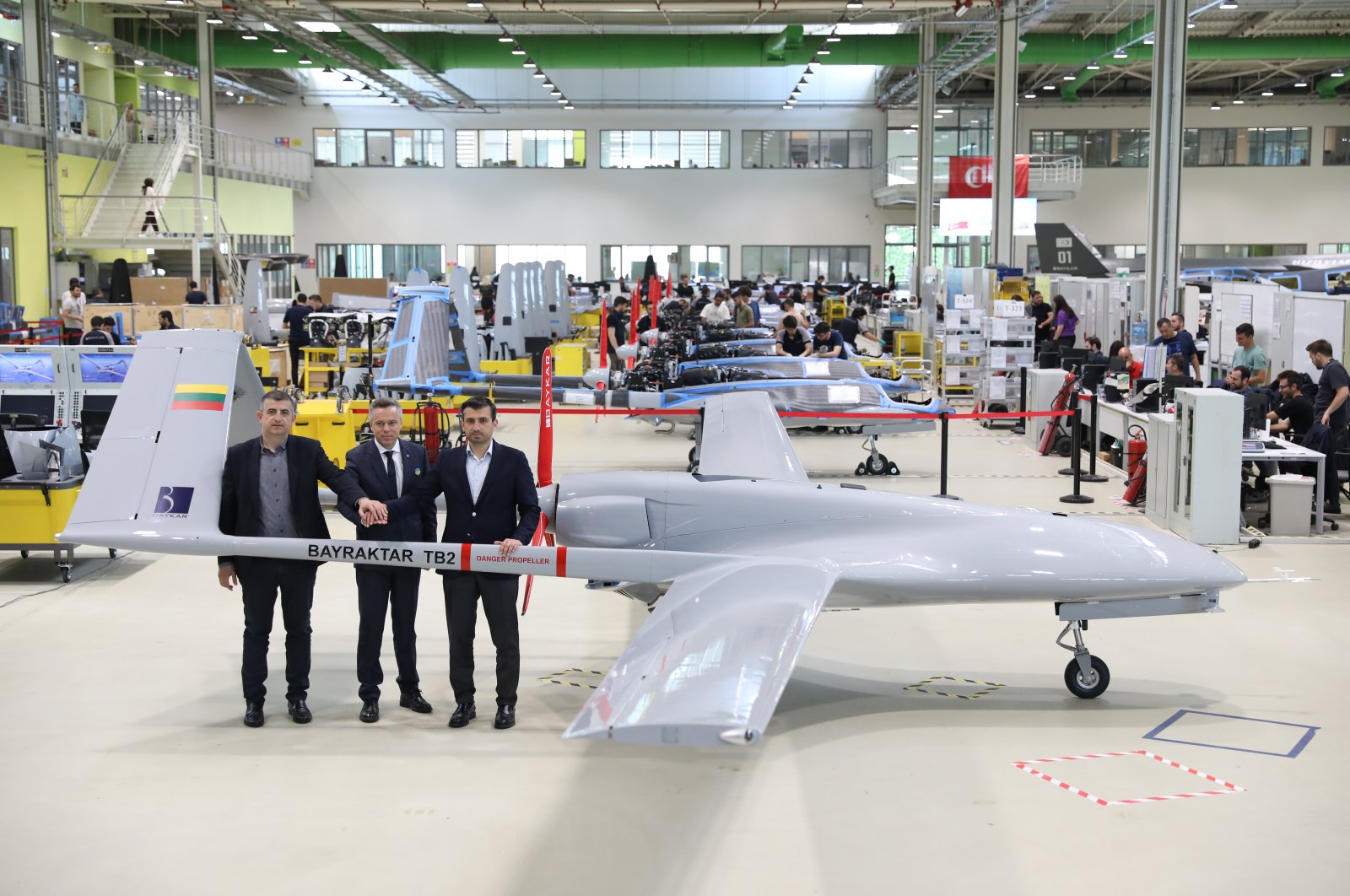 Turkish magnate to gift drone after Lithuanian fundraiser for Ukraine

Turkish drone magnate Baykar said Thursday that it would donate a Bayraktar TB2 unmanned combat aerial vehicle (UCAV) to Lithuania so that the funds its citizens had raised to buy one for Ukraine can be transferred for humanitarian aid, according to Azerbaijan in Focus, reporting Daily Sabah.

Hundreds of people chipped in to buy the advanced drone for Ukraine as a show of solidarity in its war against Russia, which also once ruled Lithuania.

A total of 5.9 million euros ($6.2 million) was crowdfunded in just 5-1/2 days, mostly in small donations, according to Laisves TV, the Lithuanian internet broadcaster that launched the drive.

Baykar confirmed its donation in a Twitter post that included photographs of its CEO Haluk Bayraktar, chief technology officer (CTO) Selçuk Bayraktar and Lithuania’s Deputy Defense Minister Vilius Semaska with a drone at its premises.

Semeska met with Baykar representatives in Istanbul on Thursday, a day after meeting with the head of Presidency of Defense Industries (SSB), Ismail Demir, in the capital Ankara.

“The people of Lithuania have honorably raised funds to buy a Bayraktar TB2 for Ukraine. Upon learning this, Baykar will gift a Bayraktar TB2 to Lithuania free of charge and asks those funds go to Ukraine for humanitarian aid,” the Turkish company said.

“Turkey will donate a #BayraktarForUkraine to Lithuania and we will ensure that this combat drone is fully armed prior to its transfer to Ukraine,” the ministry tweeted.

About 1.5 million euros ($1.6 million) of the funds raised will be used to pay for armaments for the drone, the ministry added, with the rest used for other help for Ukraine.

Baykar will deliver the drone in a few weeks. It will be painted in the colors of the Lithuanian and Ukrainian flags, according to the ministry, which had said last week it would arrange to buy the craft.

“We came to Turkey to agree on conditions for the drone purchase, but they prepared the most pleasant surprise possible for us,” Semaska said in a statement.

“It is unbelievable but Turkey just agreed to give the Bayraktar that Lithuania gathered money for and for free. It is amazing!” Lithuania’s Defense Minister Arvydas Anusauskas said in a tweet.

“For the gathered money we will buy the needed ammunition for the Bayraktar and the rest of money will also go for support of Ukraine. Thank you Turkey,” Anusauskas wrote.

The Bayraktar TB2 has been such a decisive factor in the conflicts in Syria, Iraq, Libya, Karabakh and now Ukraine, that it spearheads Turkey’s global defense export push.

Ukraine has bought more than 20 Bayraktar TB2 armed drones from Baykar in recent years and ordered a further 16 on Jan. 27. That batch was delivered in early March.

Lithuania is also looking to purchase a Bayraktar or a similar drone for its own military, Semaska told Reuters. “We are looking into a TB2 but it could also be a TB3 or another drone armed with missiles,” he said.

Currently, under development, the TB3 will feature foldable wings and will be able to take off or land on short-runway aircraft carriers.

Turkey has been investing in the defense industry heavily since the 2000s, but the real leap came in 2014 after serious investments in advanced technologies and a shift towards using locally made goods.

Turkish companies are “barely catching up with the production at the moment,” he said in a televised address.

“Currently 80% are locally made, otherwise you will knock on someone’s door and ask ‘please give me a drone,’” he added.

“Now we are working for us. This is where the power of the Turk comes.”