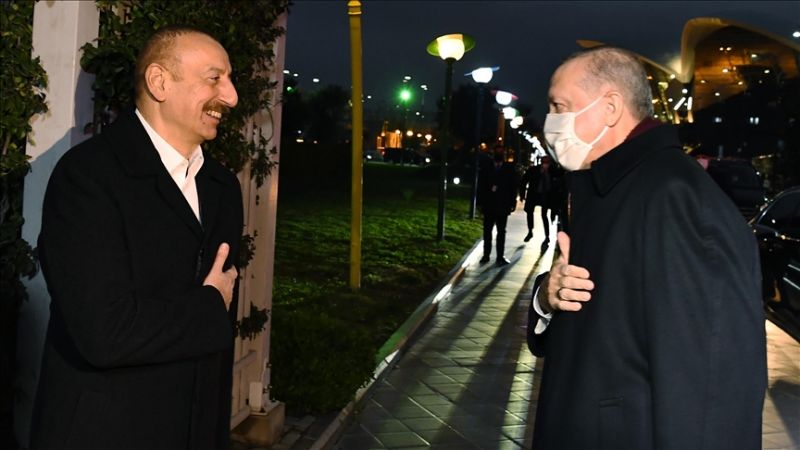 Turkish President Arrives In Azerbaijan On a Two-Day Visit

President of Azerbaijan Ilham Aliyev and President of Turkey Recep Tayyip Erdogan held a joint dinner in Baku. The dinner was attended by Turkish President’s wife Emine Erdogan and the first lady of Azerbaijan, Mehriban Aliyeva, according to Azerbaijan in Focus, reporting Turan News.

As was reported earlier, Turkish President Recep Tayyip Erdogan has arrived in Azerbaijan on a two-day visit. The plane with the Turkish head of state on Board landed in Baku at 17.20 Baku time.

During the visit, the Turkish President is accompanied by his wife Emine Erdogan, Foreign Minister Mevlut Cavusoglu, and a spokesman for the ruling Justice and Development Party (AKP) Omer Celik, Deputy Chairman of the AKP Mahir Unal, Presidential Press Secretary Ibrahim Kalyn and Head of the Communications Department under the Presidential Administration Fahrettin Altun.

The visit of the Turkish head of state is timed to coincide with the victory of Azerbaijan in the Patriotic war, which was launched on September 27 to liberate historical lands from long-term Armenian occupation.

The Turkish President will watch the Victory day Parade in Baku on December 10.

During the visit, discussions will be held on joint steps to better inform the world community about the realities of modern Azerbaijan. Regional and international issues are also on the agenda.

It is expected to sign bilateral documents that will contribute to the development of cooperation between the two fraternal countries.