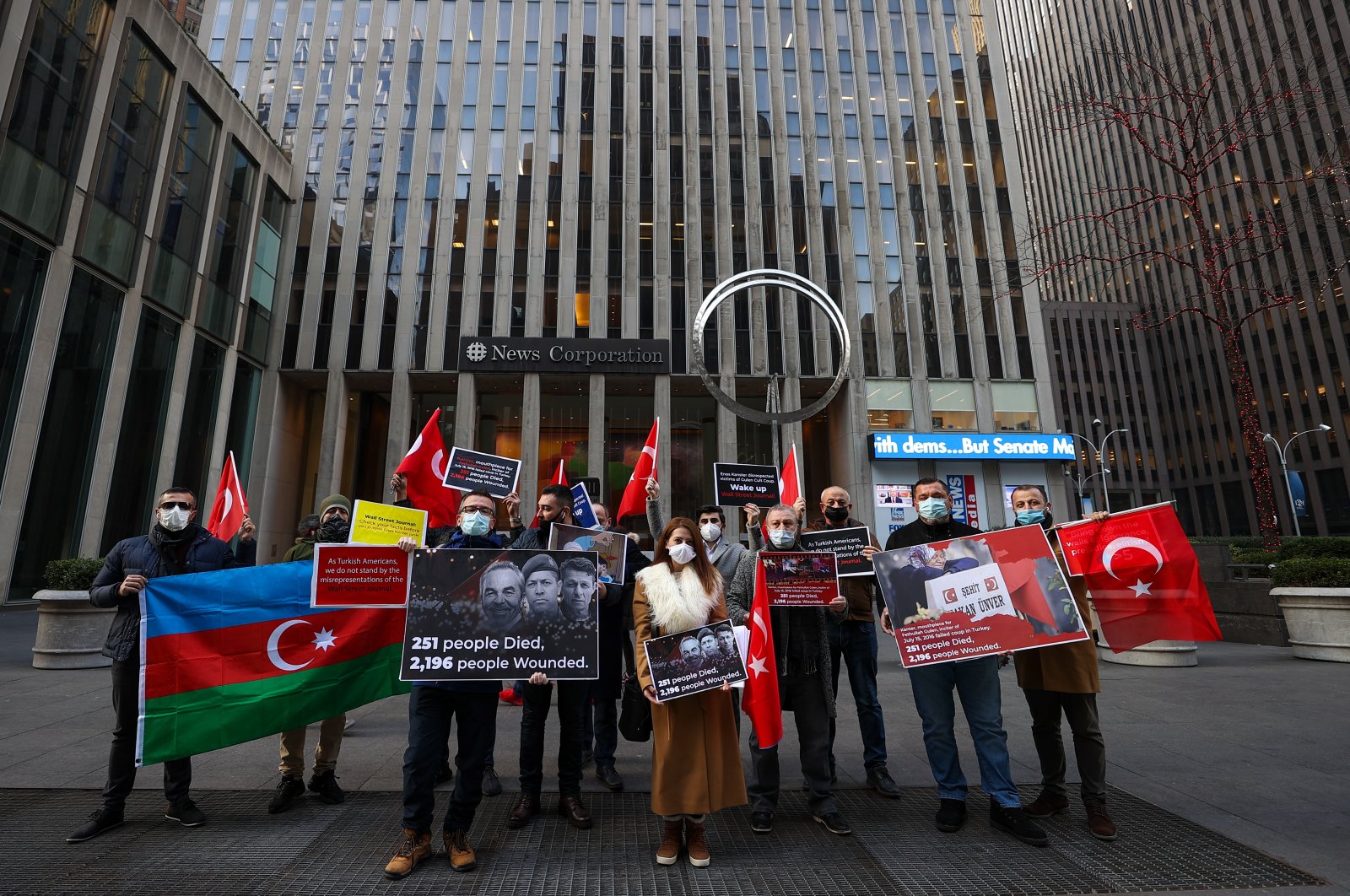 Turks in US protest WSJ’s backing of FETÖ sympathizer

A group of Turks protested outside the New York City office of The Wall Street Journal newspaper Thursday for publishing an article by a basketball player linked to a terrorist group.

In the opinion piece titled “Turkish Democracy Isn’t a Lost Cause,” Enes Kanter, a supporter of the Gülenist Terror Group (FETÖ), accused Turkey of being an “autocracy” and praised U.S. sanctions on the country over Ankara’s purchase of a Russian defense system.

In his article, Kanter – an NBA player and the so-called adopted son of FETÖ leader Fetullah Gülen, the mastermind behind the 2016 coup attempt in Turkey – insults Turkish democracy and President Recep Tayyip Erdoğan.

In August 2016, Kanter tweeted that he would sacrifice his mother and father for Gülen, sparking controversy among his fans and Turkish people.

“We are here today to condemn The Wall Street Journal for giving an opportunity to Enes Kanter who spoke against Turkey and its democracy,” Halil Mutlu, co-chair of the Turkish American National Steering Committee (TASC), said in front of the newspaper’s office.

“Enes Kanter has gone beyond being a supporter of a terrorist leader and has now become a tin soldier. He has been exploiting the sports community as a platform to this end. He has added Wall Street, too,” Mutlu said.

The Journal also drew criticism from the Turkish Embassy in Washington, D.C., with the mission recalling that FETÖ bombed the Turkish Parliament.

“FETÖ putschists, who Enes Kanter supports and advocates for, bombed the Turkish Parliament, killed 251 innocent civilians and injured more than 2,000 in an attempt to overthrow the democratically elected government on July 15, 2016,” the embassy said Monday on Twitter.

The TASC asked the Journal to publish an opinion piece it had written against the one Kanter filed, but the newspaper has yet to do so, according to Mutlu.

The protestors carried Turkish and Azerbaijani flags as well as banners that listed the number of casualties caused by the defeated coup attempt. 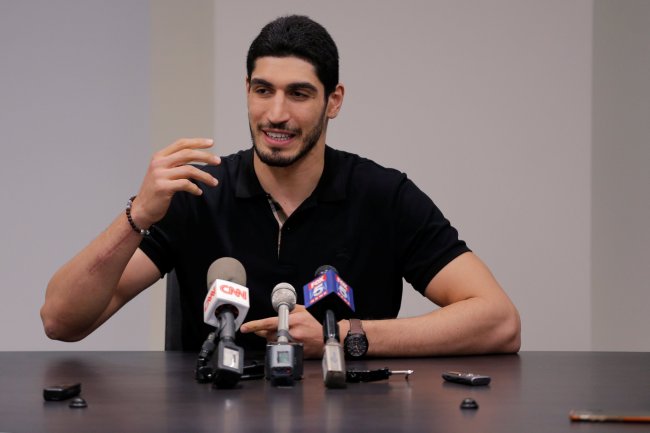 Turkish NBA player Enes Kanter speaks about the revocation of his Turkish passport and his return to the United States at the National Basketball Players Association headquarters in New York, U.S., May 22, 2017. (Reuters Photo)

Back in 2019, the Istanbul Chief Prosecutor’s Office drafted an extradition request and red notice, or international arrest warrant, for Kanter. In their request, the prosecutors cited Kanter’s connection to senior FETÖ figures and his social media posts praising Gülen. Kanter is also accused of funding the group, which is already implicated in a string of crimes, from the coup attempt to illegal wiretapping and money laundering.

The Turkish passport of this self-styled “adopted” son of Gülen was already revoked, but he was able to fly back to the U.S. with the help of the U.S. Department of Homeland Security when he was stopped in Romania back in May 2017.

The indictment against Kanter adds that he has been a user of ByLock, an encrypted messaging app exclusively used for correspondence between FETÖ members. He has been summoned to testify on previous investigations, but Kanter has not returned to Turkey since FETÖ openly started a campaign to seize power in 2013.

FETÖ has a considerable presence abroad, particularly in the U.S., including private schools that serve as a revenue stream for the terrorist group. The U.S. is home to a large community of Gülenists, including group leader Gülen. Gülen has lived in self-imposed exile on a secluded compound in the U.S. state of Pennsylvania since 1999. The U.S. is the target of most extradition requests. Turkey has sent seven extradition requests for Gülen to Washington but has seen little progress in his extradition.