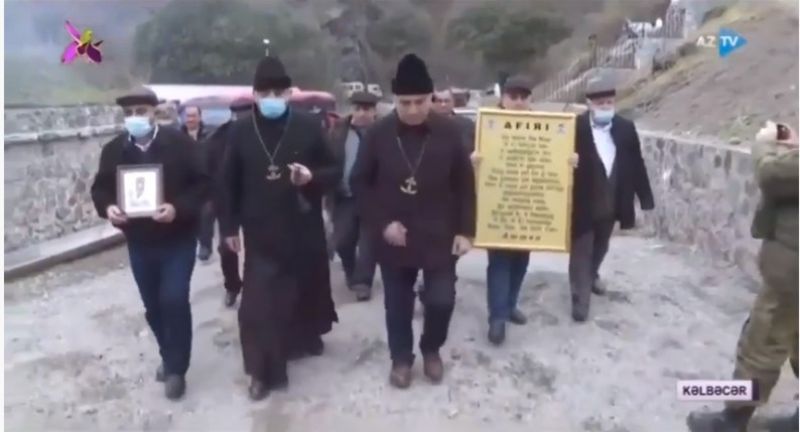 On December 4, representatives of the Albanian-Udi Orthodox community of Azerbaijan and the Baku Diocese of the Russian Orthodox Church visited the Khudavend monastery (or as Armenians call it, Dadivank) in the Kalbajar region liberated from occupation and held a prayer service, according to Azerbaijan in Focus, reporting Turan News.

The two priests of the Armenian Apostolic Church who were there, weren’t able to interfere with the ceremony.

The prayer service was also held by the Russian peacekeepers being there.

From the early Middle Ages to 1836, these religious institutions belonged to the Albanian Apostolic Church, which from the 4th century until 1836 was autocephalous (independent). The centers of the Albanian patriarchate were Chola, from the VI-VIII centuries; Barda, in the VIII-IX centuries; Berdakur, then Charek-Khamshi (not far from Gadabay), and for a short time it was in Khudavend church in honor of the disciple of the apostle Thaddeus-Dadi (Mar-Elisey) in Khachen and, finally, from 1240 to 1836 – Gandzasar (Gandzasar Cathedral).

On March 11, 1836, Emperor Nicholas the First signed a special Regulation on the Armenian Church. According to this document, the Albanian Catholikosate was abolished, and in its place two dioceses (Shusha and Shemakha) were formed under the jurisdiction of the Gregorian Catholicosate. After this act, the Christian Albanians, including the Udis, had to accept Gregorianism and confess in the dioceses of the Echmiadzin Church, which led to the cultural and ideological assimilation of a part of the Albanians. After the abolition of the church, the policy of aggressive appropriation of the Albanian ethno-cultural heritage and its transformation into Armenian, pursued by Echmiadzin, as well as the policy of de-ethnicization of the Albanians was carried out, first of all, by the construction and dismantling of churches for Albanian Christians, which the Udis did not attend in protest.

On the territory of Azerbaijan, outside the Karabakh region, there are two Albanian-Udi churches.

– What is correct in the messages?

– There is no Albanian preacher or other clergyman in this monastery yet. These issues are now being resolved at the level of the Azerbaijani state, since the Armenians in the monastery have created such a situation as if there was no war, as if Azerbaijan did not return its lands, and as before, all Armenians rule in Khudavend.

– Whom did you meet in the Albanian temple of Khudavend?

– We, the 12 representatives of the Albanian community, arrived there on December 5, stayed in the monastery until 4 pm. There was a large group of journalists, the Azerbaijani service members, and a representative of the public relations department of the Ministry of Defense of Azerbaijan. Russian peacekeepers guarding the monastery accompanied us. Upon entering the territory, we saw seven or eight Armenians, some of them in the clothes of clergy. Apparently, they come to Kalbajar under the protection of peacekeepers and leave for Armenia on the same day. These people tried to forbid us to worship, and said that we could only put and light candles in the church like ordinary visitors. “This is an Armenian church, people of other confessions cannot pray in it,” they said. We objected, saying that, firstly, Armenians have no right to restrict visits to the monastery, even Muslims can visit a Christian church, and it is unthinkable to prohibit worship for Udi Christians.

An Orthodox priest took part in the discussion, and then the Armenians decided not to interfere with us. We held a traditional Udi divine service using the Albanian shrines – the cross and the Bible. We prayed for the repose of the Azerbaijani martyrs, who died heroically for the liberation of Karabakh.

– What did you talk about with the Armenians, what general conclusions did you come to?

– The Armenians who are there behave like masters, as if nothing happened in the last 2 months. They are under the protection of the Russian military, this problem should be resolved at the state level, and this should not be the case. The Armenians did not let the journalists into the church for the prayer service. We protested, but the journalists did not come to the church for the prayer service, I do not know how to explain such a ban. There was a heated discussion. We reminded the Armenians of the history of the Albanian Caucasian Church, told them that the Armenian priests do not behave like a brother to the Albanian Christians when they hide the history of religion in Caucasian Albania from the flock, when they do not mention the Albanians as the historical founders of the Orthodox Church in the Caucasus. They showed the facts of armenization, Gregorianization of the Albanian temple on the example of the architectural features and the shape of the cross, which is visible at the entrance to the complex.

During a six-hour journey to Kalbajar through Dashkesan, I saw only two semi-destroyed Albanian temples, as after the bombing. I told Armenians that for 27 years of their tenure, they had not restored these temples, though there was no military action in Kalbajar. They discussed historical facts, showing maps of the location of Caucasian Albania, which existed before the construction of Armenian churches on this territory. It is difficult to talk to them because they are stuffed with lies. They objected to us, saying that there is a casino in the Armenian church in Baku. We were outraged: what kind of casino can there be in the center of Baku, gambling is prohibited in Azerbaijan! I showed photos of the Armenian church from the inside, books are kept there. Then one of the Armenians softened, said that he remembered: the Armenian Patriarch Garegin attended the Baku Armenian Church when he was in Baku.

– What will you do after visiting the Khudavend Monastery?

– This is the main question. I did not sleep all night on the road, and at home, I worked with documents. The canonical territory taken away by the Armenians in 1836 by the decrees of the Russian Synod and the Tsar should be returned to the Albanian Church. The Armenians lost the war, left Azerbaijan, but do not want to leave the canonical territory. This issue should be resolved with the participation of the Azerbaijani state. Russian peacekeepers support the Armenians and created comfortable conditions for them. It should not be.

The Albanian Orthodox Church is autocephalous; there is no need for permission from a certain higher clergyman. We do not obey Constantinople; the Albanian church belongs to the Jerusalem Christian churches. For 200 years, the Albanians of the Caucasus did not have their own high priest, now we are working on these organizational issues. Now I cannot tell everything, but time the public will know everything.