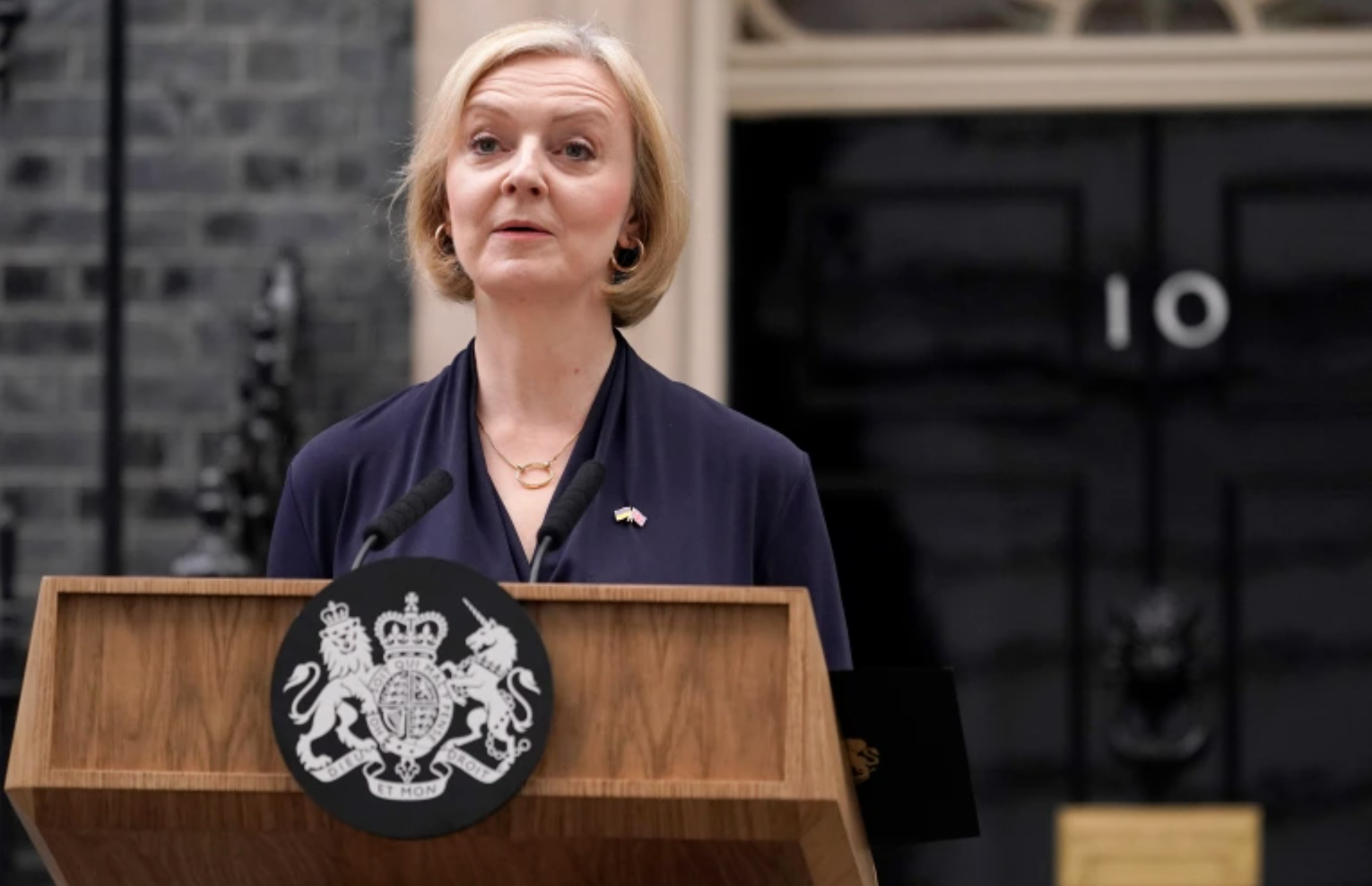 Liz Truss has resigned as prime minister after 45 days in office marked by turmoil, triggering the second Tory leadership election in four months.

Ms Truss said her successor would be elected by next week after a rebellion by Tory MPs forced her to quit. Boris Johnson is among MPs said to be considering bids but Chancellor Jeremy Hunt has ruled himself out.

Tory MPs revolted against Ms Truss after a series of U-turns on her economic plan sapped her of authority.

In a brief speech outside Downing Street, Ms Truss said the Conservative Party had elected her on a mandate to cut taxes and boost economic growth.

But given the situation, Ms Truss said: “I recognise that I cannot deliver the mandate on which I was elected by the Conservative Party.”

Ms Truss said she would remain in post until a successor formally takes over as party leader and is appointed prime minister by King Charles.

While Mr Hunt – who was appointed chancellor last week – will not challenge for the leadership, none of the candidates who stood against Ms Truss in the previous contest have indicated whether they would stand.

However, Conservative sources have told the BBC that Business Secretary Jacob Rees-Mogg has been encouraging colleagues to back Mr Johnson in the race.

Sir Graham Brady, the chairman of the 1922 committee of backbench Conservative MPs, said a new leader could be chosen by next Friday.

Under party rules, leadership hopefuls will need to secure the support of 100 MPs in order to enter the contest – this means a maximum of three candidates can stand.

A first ballot will be held among MPs and the person with the lowest number of votes will be eliminated, if there are three candidates.

If a second ballot is needed, MPs will be able to signal who they prefer through an indicative vote.

And if both candidates opt to stay in the race, the final decision will go to party members via an online vote.

Ms Truss will become the shortest-serving PM in British history when she stands down.

Leaders of allied nations thanked Ms Truss for her co-operation, including US President Joe Biden and French President Emmanuel Macron, who said he wanted “stability” from the next UK prime minister.

In her speech, Ms Truss said she entered “office at a time of great economic and international instability”, as war rages in Ukraine and living costs skyrocket.

The prime minister said her government delivered on providing support for energy bills and reversing a rise in National Insurance, a tax on workers and companies.

But Ms Truss’s resignation comes after a period of political and economic turbulence, which forced her government to ditch tax cuts that sent financial markets into a tailspin.

The prime minister sacked close political ally Kwasi Kwarteng as chancellor and appointed Mr Hunt as his successor as she attempted to calm the markets.

At Prime Minister’s Questions on Wednesday, Ms Truss insisted she was a “fighter, not a quitter” after Labour’s leader asked her why she had not resigned.

But more instability followed, when Suella Braverman quit as home secretary and a vote on fracking fell into disarray, with some Tory MPs accused of bullying.

Ms Truss’s resignation sets off a scramble to find a successor to lead a deeply divided party, which is lagging behind Labour in the polls after 12 years in power.

Their supporters are talking them up as potential candidates in the contest to succeed Ms Truss, but none have confirmed their position on standing.

Nor has former Prime Minister Boris Johnson, whose supporters have not denied reports that he is considering standing again for the Conservative leadership.

A source close to Mr Johnson told the BBC they were “not saying anything either way” at the moment.

In a tweet, another former prime minister, Theresa May said “MPs must now be prepared to compromise.

“It is our duty to provide sensible, competent government at this critical moment for our country,” she wrote.

As Tories assessed their chances of winning the leadership, opposition parties poured scorn on the idea of another prime minister taking office without having a general election.

Sir Keir said the Conservative Party “no longer has a mandate to govern”, saying “the British people deserve so much better than this revolving door of chaos”.

Liberal Democrat leader Sir Ed Davey said his party would be willing to work with Labour to “get the general election our country needs to let the British people have their say”.

The next general election is not due to take place until at least 2024, after the Conservatives won a landslide majority in the last one in 2019.

The Liberal Democrats have also urged Ms Truss to turn down an allowance, worth up to the £115,000 per year, to which former prime ministers are entitled.

The money, called the Public Duty Costs Allowance, is to help with “necessary office costs and secretarial costs arising from their special position in public life”.

The Liberal Democrats’ cabinet office spokesperson Christine Jardine said: “Liz Truss will forever be known as the 50-day prime minister – there is no way that she should be permitted to access the same £115,000-a-year for life fund as her recent predecessors – all of whom served for well over two years.”

This report originally appeared on BBC on October 21, 2022.