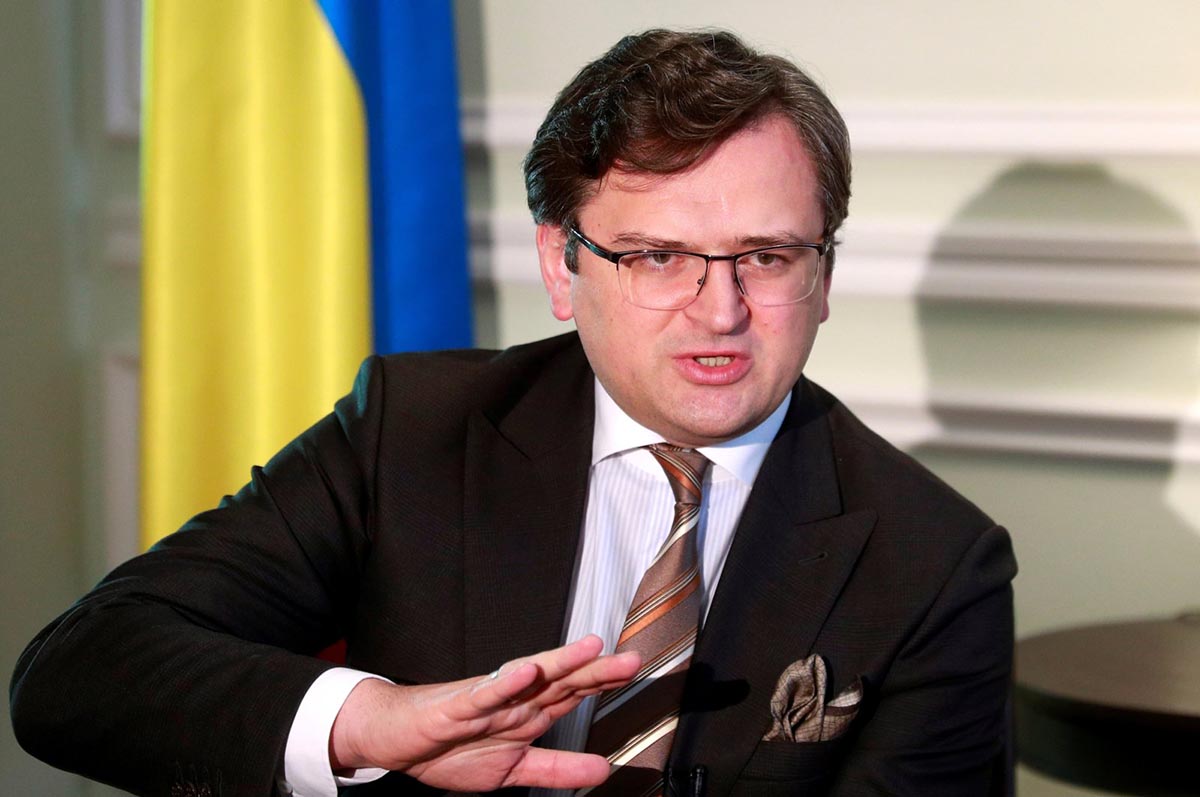 Kyiv has called on Western allies to impose additional sanctions against Moscow in a bid to deter the Kremlin from resorting to more military force against Ukraine as the Russian defense minister arrived in Crimea to orchestrate massive military drills.

Backdropped by weeks of escalating tensions between Ukraine, the Western world and Moscow over a huge Russian military build-up near its neighbor’s border, Ukraine urged allies to show they were prepared to punish Russia with new sanctions, including kicking it out of the global SWIFT payments system, to deter the Kremlin from resorting to more military force against Ukraine.

In an interview with Reuters on Wednesday, Foreign Minister Dmytro Kuleba said while Kyiv had no new information indicating that Russian President Vladimir Putin had decided to take new military action against Ukraine, it was important for the West to act now to prevent that happening.

Ukraine is trying to shore up international support in its standoff with Moscow over a build-up of Russian troops on its eastern border and in Crimea, which it annexed from Kyiv in 2014.

“I have no information to state that the decision to launch a military operation against Ukraine has already been taken. So it can go in either direction now,” Kuleba said. “And this is why the reaction of the West, the consolidated reaction of the West, is so important now, to prevent Putin… from making that decision.”

Kyiv and Moscow have traded blame for a collapse in the cease-fire in the eastern Donbass region, where Ukrainian troops have battled Russian-backed forces in a conflict Kyiv says has killed 14,000 people since 2014.

Kuleba said he asked Washington to supply “powerful means of electronic warfare” to counter Russia’s capacity to jam Ukrainian communications when he met U.S. Secretary of State Antony Blinken last week. He also revealed he had urged a meeting of European Union foreign ministers on Monday to consider banning Russia from SWIFT as part of a package of new economic sanctions they should be prepared to impose if Russia escalated the situation.

“If Russia decides to launch another wave of its open military aggression against Ukraine, a new round of sectoral sanctions – including for example banning Russia from SWIFT and these kind of things – should be immediately imposed on it,” he said. Western diplomacy had helped restrain Russia but everything “will depend on whether they’re ready to… follow their words with deeds,” Kuleba said.

He said Ukraine had not received a response from the Kremlin to President Volodymyr Zelenskiy’s invitation to Putin on Tuesday for talks in the Donbass conflict zone. Putin on Wednesday warned the West not to cross Russia’s “red lines,” saying Moscow would respond swiftly and harshly to any provocations. 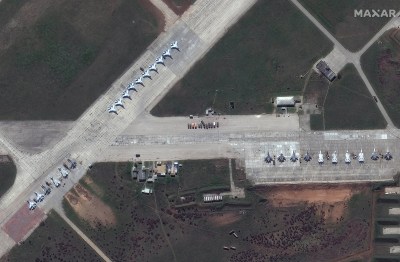 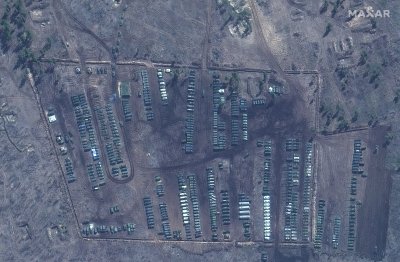 While the Crimean Peninsula has served as the “red line” for both countries since 2014, Russian Defense Minister Sergei Shoigu arrived at the annexed territory on Thursday to oversee large-scale snap drills of Russia’s southern military district and paratroopers close to Ukraine.

According to media reports, the Russian Armed Forces military exercises began on Thursday at the Opuk Crimean training ground. More than 10,000 servicemen, 1,200 units of equipment as well as 40 warships are taking part in drills, the ministry of defense said in a statement. Shoigu arrived before the start of active operations. He flew around the troop deployment area in a helicopter and consulted with a commander of the Southern Military District, Col. Gen. Alexander Dvornikov.

The landfill is located at a distance of 60 kilometers (37.28 miles) from Feodosia and 40 kilometers (24.85 miles) from Kerch. The landfill allows troops to practice landings and overcoming amphibious enemy defense tactics and is can host two marine divisions of amphibious assault forces at the same time. The area is also used to practice firing at coastal targets with the help of naval artillery complexes and using operational-tactical and army aviation.

Shoigu’s visit came as he accused the United States and NATO of engaging in “provocative activities” in the waters and airspace of the Black Sea, the Interfax news agency reported. Shoigu was also quoted as saying that Kyiv was trying to destabilize the situation in Ukraine’s eastern Donbass region.

Last week he asserted that the United States and NATO are moving troops to the borders of the European part of the Russian Federation as they plan to deploy 40,000 troops and 15,000 units of weapons and equipment, including strategic aviation.

“Now American troops are being transferred from the continental parts of North America across the Atlantic to Europe. There is a movement of troops in Europe to the Russian borders. The main forces are concentrated in the Black Sea and Baltic region,” Shoigu said at a meeting in Severomorsk. The minister noted that “U.S. forces are strengthening in Poland and the Baltic countries”.

“Every year in Europe, the Alliance conducts up to 40 major operational training events that have a clear anti-Russian focus. This spring, the NATO armed forces began the most ambitious exercise in the past 30 years, Defender Europe – 2021,” the minister emphasized.

“I believe the objectives of the snap inspection have been fully achieved. The troops have demonstrated their ability to provide a credible defense for the country,” Shoigu was quoted as saying. “In this regard, I have decided to complete the inspections in the southern and western military districts,” he said. The minister added they would return to their bases by May 1.

After the 2014 Euromaidan protests in Ukraine that prompted pro-Russian then-president Viktor Yanukovich to flee the country, Moscow saw an opportunity to enact its plan to annex Crimea under the pretext of saving the Russian-speaking population from “nationalist Ukrainians.” Russia annexed the Crimean peninsula from Ukraine in 2014, prompting the West to impose sanctions. Kyiv wants the region back and argues that Russia unleashed an offensive campaign targeting the ethnic Crimean Tatar population and those who opposed the illegal annexation of the territory.

On Thursday RIA reported that the country’s Federal Security Service arrested a man in Crimea on suspicion of treason for allegedly handing over secret information to Ukraine about Russia’s Black Sea Fleet (BSF).

The man, who was not identified by name, was arrested in Sevastopol for allegedly gathering and handing over secrets to Ukrainian military intelligence about the Russian fleet that is based on the Black Sea, the security services were cited as saying.

There has been a spate of treason cases in Russia in recent years. Government critics have questioned the charges in some of those cases and said the allegations cannot be scrutinized because case details are typically not disclosed. Last month a woman was sentenced to 12 years in jail for spying on behalf of Ukraine at a trial held behind closed doors. Lyudmyla Denisova, the human rights ombudsman for the Ukrainian parliament, said the case against the woman was fabricated.