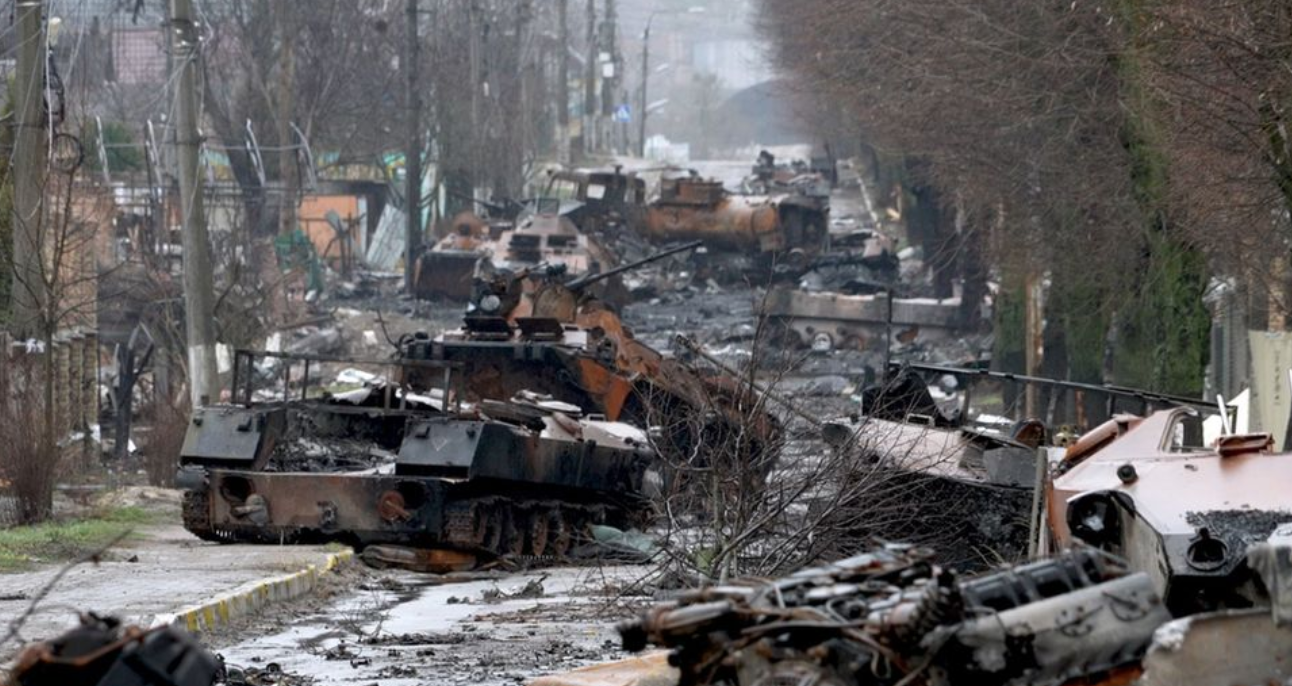 A suburban avenue in Bucha became one of the first graveyards for Russia’s hopes of encircling and entering Kyiv and then deposing the government of President Volodymyr Zelensky.

The moment came two or three days after the first Russian forces crossed into Ukraine on 24 February, when Ukrainian forces destroyed a column of Russian tanks and armoured personnel carriers moving through the town of Bucha to the city of Kyiv.

The convoy was destroyed in one of the first of many Ukrainian ambushes that stopped the Russian advance dead.

Our BBC team was able to get to Bucha because on Friday the final Russian soldiers pulled out, as part of what the Kremlin has presented as a calm and rational decision to concentrate on the war in eastern Ukraine.

Moscow says, without proof or any reliability, that its war aims in central Ukraine have been achieved, and they never included capturing Kyiv.

The truth is that unexpectedly fierce and well organised Ukrainian resistance stopped them outside the capital, and the evidence includes the rusting and twisted wreckage of the column that still lies where it was destroyed on that suburban street.

Two or three weeks into the war the Russian invaders ran out of momentum. On the street in Bucha you can see why.

Elite troops from Russia’s airborne forces rode into the town in armoured vehicles light enough to be carried by aircraft. They came from Hostomel airport, a few miles away, which had been attacked and seized by Russian paratroopers and landed by helicopter on the first day of the invasion. Even then, there was fierce resistance from Ukrainian forces.

When the column moved through Bucha on the way to Kyiv, they had a harsh awakening.

The road is narrow and straight, an ideal place for an ambush. Witnesses said the Ukrainians attacked the convoy with Bayraktar attack drones bought from Turkey. Other neighbours said Ukrainian territorial defence volunteers were also in the area.

However they did it, the lead vehicles and the ones bringing up the rear were knocked out and imprisoned by the others. The wreckage has not been touched. Belts of 30mm cannon shells lie on the grass verge, along with many pieces of dangerous and damaged abandoned ordnance.

Young conscripts ran away, begging, local people said, not to be turned over to Ukrainian territorial defence. A man of around 70 who called himself uncle Hrysha, said: “I felt sorry for them. They were so young, 18 to 20, with their whole lives ahead of them.”

It looks as if Russians, as they prepared to pull out of Bucha, had no such pity. At least 20 dead men were lying in the street as Ukrainian troops entered the town. Some of them had their hands tied behind their backs. The mayor said they had buried 280 people in mass graves.

A few civilians who stayed said they had tried to avoid the Russians. They set up wood fires outside their Khrushchev-era flats, cooking on them outdoors because their gas, power and water were cut.

Volunteers are bringing supplies in from Lviv in western Ukraine, and from countries far from the war, geographically at least.

“This is the first bread we’ve had in 38 days,” said a woman called Maria, looking at a plastic bag with some modest-looking buns inside. Her daughter Larysa showed me around the Soviet-built apartment building.

Many of the people who had left for safer areas, or abroad, had bolted shut security doors. The Russians removed them by ripping out the concrete lintels and doorposts.

A few miles away, the trail of devastation leads to Hostomel airport. Russian airborne troops tried to use it as a base for a push into Kyiv.

The world’s largest transport plane was destroyed early on. The roof of the enormous hangar built for it was so riddled with a constellation of shrapnel holes. The plane itself, known by the Ukrainian word for dream (Mriya), lies there broken-backed, with big chunks of fuselage and engine in places around it. Its fate is a parable of what is happening to Ukraine.

An enormous amount of national pride was invested in the aircraft, as a symbol of Ukraine’s ability to make big projects all around the world.

This report originally appeared on BBC News on April 3, 2022.