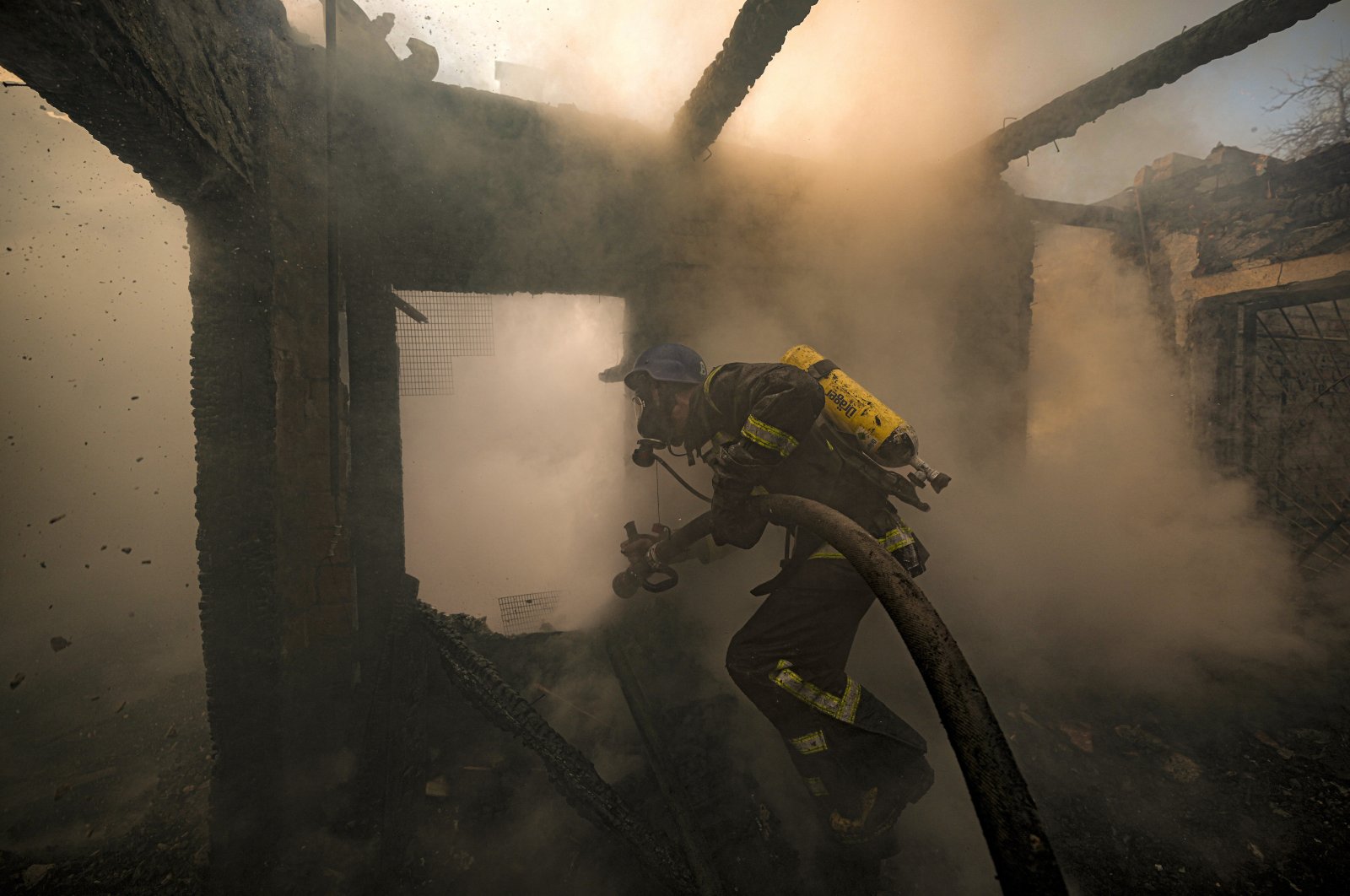 Ukrainian President Volodymyr Zelenskyy called on people worldwide to gather in public Thursday to show support for his embattled country as U.S. President Joe Biden and other world leaders met for talks focused on pressuring Russia to end the invasion that is entering its second month.

“Come to your squares, your streets. Make yourselves visible and heard,” Zelenskyy said in English during an emotional video address late Wednesday that was recorded in the dark near the presidential offices in Kyiv. “Say that people matter. Freedom matters. Peace matters. Ukraine matters.”

Brussels was the center Thursday of a flurry of diplomatic activity. NATO Secretary-General Jens Stoltenberg opened an emergency summit bringing together Biden and other leaders by saying that the alliance is determined to continue to ratchet up the costs on Russia for its aggression.

Russia unleashed its invasion on February 24 in Europe’s biggest offensive since World War II, but instead of swiftly toppling Ukraine’s government, its forces are bogged down in a grinding military campaign and its economy is laboring under punishing international sanctions.

“This is a month now,” Zelenskyy said Thursday in an address to Sweden’s parliament, the latest of many to whom the Ukrainian leader has pleaded for help. “We have not seen a destruction of this scale since World War II.”

After a month of fighting, Western analysts say Ukrainian forces need to stock up again with the weapons that have helped them slow and repel Russian advances. Both sides claimed Thursday to have inflicted more blows. Ukraine’s navy said it sank a ship that had been used to resupply the Russian campaign with armored vehicles. Russia claimed to have taken a town, Izyum, in eastern Ukraine after heavy fighting.

But in many areas, Ukrainian forces appear to have battled Russian troops to a stalemate, an outcome that seemed unlikely when Russian President Vladimir Putin unleashed his invasion force.

Determined to make Putin pay, and under intense pressure from Zelenskyy to do more, Western nations said more help is on the way for Ukraine.

European Union nations signed off on another 500 million euros ($550 million) in military aid. And Biden was expected to discuss new sanctions on Russia, along with more military aid for Ukraine, with NATO members. He will also talk with leaders of the G7 industrialized nations and the European Council in a series of meetings on Thursday.

Sending a signal that sanctions have not brought it to its knees, Russia reopened its stock market Thursday but allowed only limited trading. The curbs on a reduced number of stocks including energy giants Gazprom and Rosneft were meant to prevent a repeat of a massive selloff that took place on February 24. Foreigners were barred from selling and traders were barred from short selling, or betting prices would fall. The benchmark MOEX index gained 8% in the first minutes of trading.

In Ukraine, Russian troops are bombarding targets from afar, falling back on tactics they used in reducing cities to rubble in Syria and Chechnya.

“Just look at what the Russian army has done to our country,” Zelenskyy said in his address to Swedish lawmakers. “A month of bombings similar to what we have seen in Syria.”

It is still unclear exactly how many troops Russia has lost in pursuing Putin’s aims. Russia hasn’t given an update since March 2, when it acknowledged nearly 500 soldiers killed and almost 1,600 wounded. NATO estimates, however, that between 7,000 and 15,000 Russian troops have been killed – the latter figure about what Russia lost in a decade of fighting in Afghanistan.

Ukraine has released little information about its own military losses, and the West has not given an estimate. Zelenskyy said nearly two weeks ago that about 1,300 Ukrainian troops had been killed.

Having failed to take out Ukraine’s government with a lightning-quick strike in the first month, a fear going forward is of the Kremlin possibly resorting to other more destructive weapons in its arsenal.

In an ominous sign that Moscow might consider using nuclear weapons, senior Russian official Dmitry Rogozin said the country’s nuclear force would help deter the West from intervening in Ukraine.

“The Russian Federation is capable of physically destroying any aggressor or any aggressor group within minutes at any distance,” said Rogozin, who heads the state aerospace corporation, Roscosmos, and oversees missile-building facilities. He noted in his televised remarks that Moscow’s nuclear stockpiles include tactical nuclear weapons, designed for use on battlefields, along with far more powerful nuclear-tipped intercontinental ballistic missiles.

U.S. officials long have warned that Russia’s military doctrine envisages an “escalate to deescalate” option of using battlefield nuclear weapons to force the enemy to back down in a situation when Russian forces face imminent defeat. Moscow has denied having such plans.

Rogozin, known for his bluster, did not make clear what actions by the West would be seen as meddling, but his comments almost certainly reflect thinking inside the Kremlin.

For civilians, the misery has been unrelenting.

In the south, the encircled port city of Mariupol has seen the worst devastation of the war, enduring weeks of bombardment and, now, street-by-street fighting. But Ukrainian forces have prevented its fall, thwarting an apparent bid by Moscow to fully secure a land bridge from Russia to Crimea, seized from Ukraine in 2014.

In their last update, over a week ago, Mariupol officials said at least 2,300 people had died, but the true toll is probably much higher. Airstrikes in the past week destroyed a theater and an art school where civilians were sheltering.

Zelenskyy said 100,000 civilians remain in the city, which had a population of 430,000 before the war. Efforts to get desperately needed food and other supplies to those trapped have often failed.

In the besieged northern city of Chernihiv, Russian forces bombed and destroyed a bridge that was used for aid deliveries and civilian evacuations, regional governor Viacheslav Chaus said.

Kateryna Mytkevich, 39, who arrived in Poland after fleeing Chernihiv, wiped away tears as she said the city is without gas, electricity, or running water, and entire neighborhoods have been destroyed.

“I don’t understand why we have such a curse,” she said.

Since Russia invaded Ukraine a month ago, 294 civilians, including 15 children, have been killed in the north-eastern city of Kharkiv, local police said on Thursday on Telegram. People were hardly leaving the bunkers where they sought refuge from attacks, and residential buildings, schools, hospitals, utilities, and businesses were on fire, they said. Before the war, 1.5 million people lived in Kharkiv. The city has repeatedly been targeted by airstrikes, the Ukrainian army said.