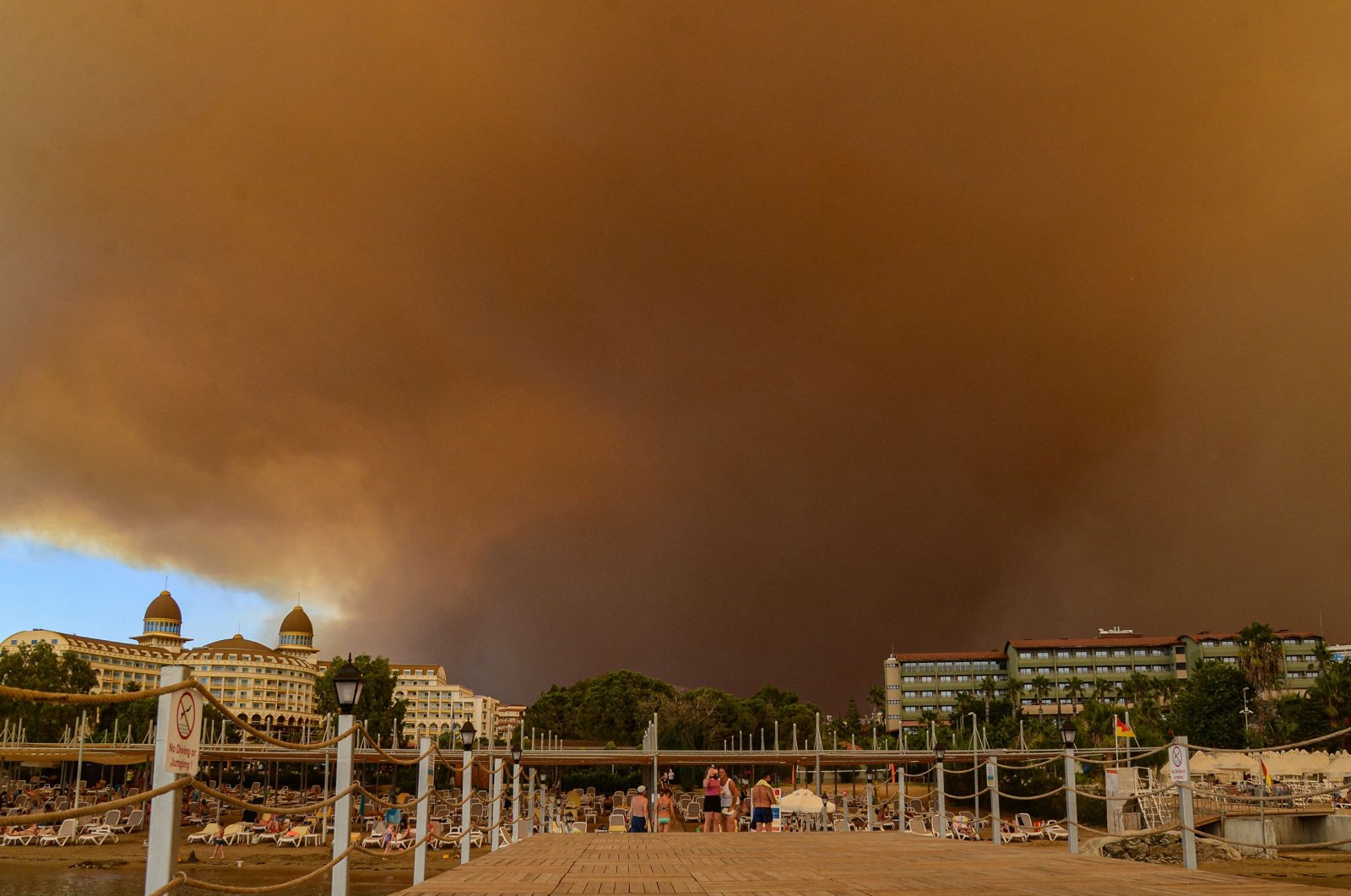 Dark smoke drifts over a hotel complex during a massive forest fire that engulfed a Mediterranean resort region on the southern coast near the town of Manavgat, Antalya, southern Turkey, July 29, 2021. (AFP Photo)

Ukrainian President Volodymyr Zelenskyy late Thursday said a firefighting plane from his country will depart Friday to support Turkey, as the country tries to contain massive wildfires in several forest regions of its western and southern provinces.

Zelenskyy, expressing sincere condolences to his “friend and President of Turkey, Recep Tayyip Erdoğan,” over the large-scale fires, said in a Twitter statement that Ukraine will provide Turkey with all the necessary assistance.

“Our firefighting plane will depart for Turkey tomorrow. The Ukrainian people will stand together with the friendly Turkish people at this difficult time,” he also said.

Forest fires spread to a vast area in Turkey’s southern provinces Thursday, from the summer getaway of Antalya to Adana and Mersin. The fires started Wednesday, threatening residential areas. Three citizens have so far lost their lives in the fires that have particularly harmed wildlife, along with farm animals.

According to the latest statement by the Minister of Agriculture and Forestry Bekir Pakdemirli, some 42 fires out of a total of 63 that occurred in 21 provinces were taken under control, while the rest are continuing to burn.

The large and almost consecutive nature of the fires triggered concerns that they might be a result of a string of arson attacks, while eyes turned toward PKK terrorists-related groups as they started similar fires before with an aim of sabotage.

Two PKK terrorists were detained late Thursday in the Turgutlu district of Manisa. The Manisa Governorate said in a statement that there is not enough information yet that the detained terrorists have links to the current wildfires, but investigations are continuing.

Meanwhile, PKK sympathizers have already hailed the fires on Twitter. The PKK has a long history of burning Turkey’s forests as a method of “vengeance” from the Turkish state and causing civilian deaths and environmental destruction in the process.

According to the country’s Disaster and Emergency Management Authority (AFAD), three people lost their lives and 138 others were affected by the wildfires in Antalya’s Manavgat district – one of the most severely affected regions – including one person being seriously wounded. The treatment of 58 people is continuing at a number of hospitals, it added. Many houses, workplaces, barns, farmland, greenhouses and vehicles were damaged due to the blaze, it said, adding that a dozen teams are currently conducting a damage assessment.

This article originally appeared in DAILY SABAH on 30 July 2021.