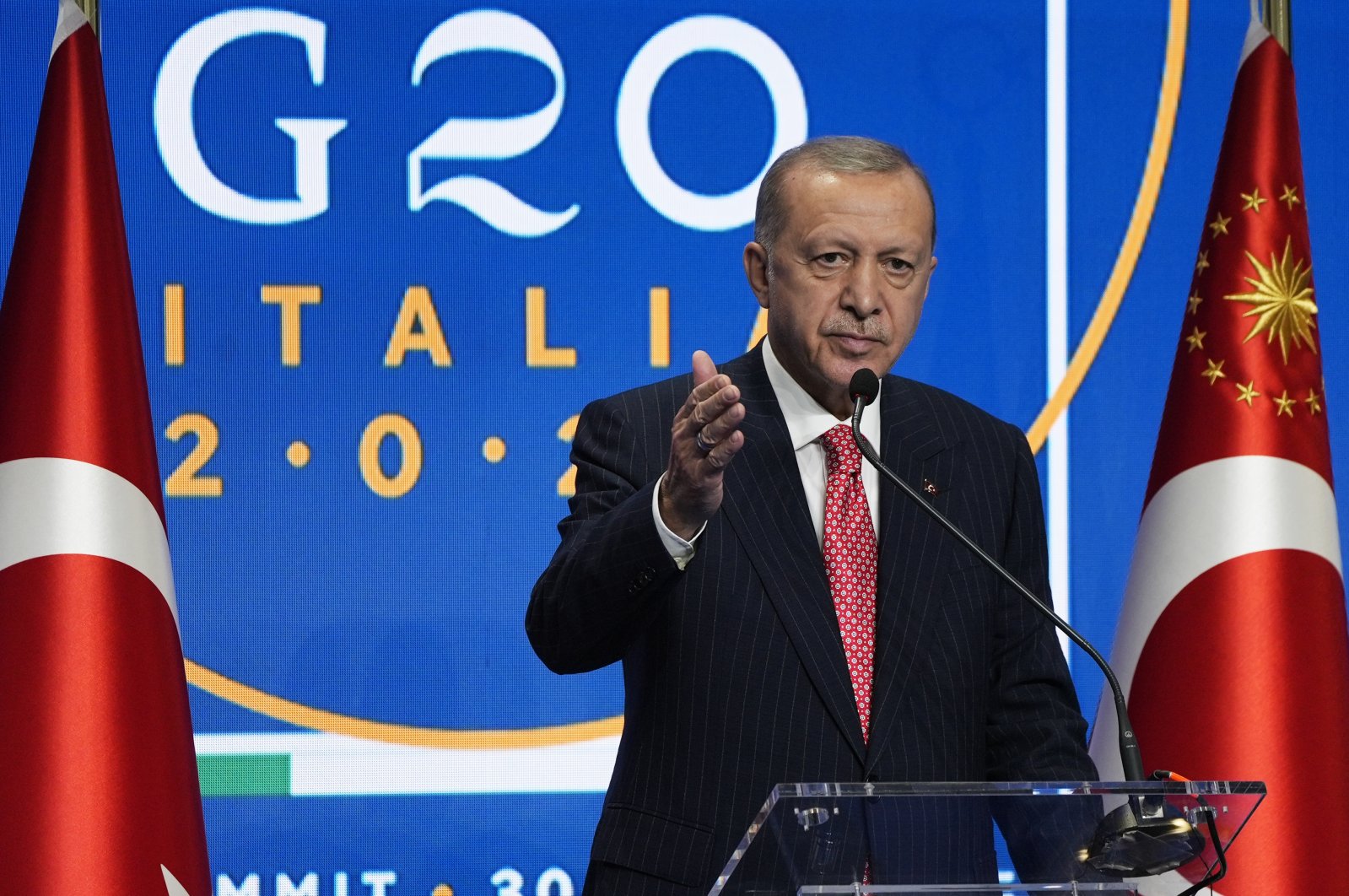 US ready for talks on F-16s, Turkey’s fight against YPG: Erdoğan

Ankara and Washington agreed on the need to cooperate on terrorism as well as the F-16 dispute, President Recep Tayyip Erdoğan said on his return from the G-20 summit in Italy, where ties with several countries were discussed

Turkey and the United States had positive talks on vital bilateral issues including the F-16 issue and the fight against the PKK terrorist group’s Syrian wing, the YPG, President Recep Tayyip Erdoğan said, underlining that Washington is ready to cooperate.

“Mr. Biden said he will do what he can regarding the F-16s issue. Our defense and foreign ministers will discuss this, yet we might not get a result on this sensitive issue that concerns bilateral relations in a quick manner, since the way toward this goes through the representatives and senate,” Erdoğan said on his return flight from the G-20 summit in Rome where he held talks with U.S. President Joe Biden on Sunday.

Delegations between the two countries will hold a second meeting on the F-35 issue in a few months in Washington, Turkish defense ministry sources announced Monday.

Turkey’s 2019 purchase of a Russian S-400 air defense system has been a drag on ties, prompting Washington to block Ankara’s plans to buy about 100 next-generation U.S. F-35 planes.

Turkey says its removal is unjust and has demanded reimbursement for its $1.4 billion (TL 13.32 billion) investment in the program.

Erdoğan has said Washington offered Ankara a package of F-16 jets and modernization kits in exchange for the payment.

“Moreover, joint works, a bilateral mechanism will start rapidly between our ministers, officials and interlocutors on the areas of trade, regional, security and defense issues,” he said.

The two leaders also discussed cooperation on regional issues including Afghanistan, Syria, Libya and the Eastern Mediterranean and vowed to increase economic ties to reach the goal of $100 billion, the president said.

Speaking on his meeting with Biden, the president mentioned that British Prime Minister Boris Johnson was also present. He also indicated that he could have future talks with Biden at the Turkish House (Türkevi) – a landmark building in New York City which is a stone’s throw from the United Nations headquarters. Erdoğan said also that he gave the U.S. leader his recently published book. 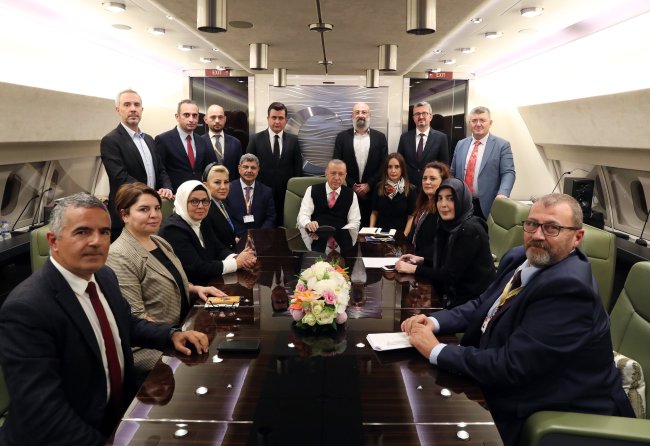 President Recep Tayyip Erdoğan is seen with member of Turkish press on his way back from the Rome summit, Oct.31, 2021 (Courtesy of the Presidency)

The president further highlighted that both countries agreed on cooperating in the fight against terrorism in Syria, another major issue between Ankara and Washington.

“If we are NATO allies, an ally must not resort to this,” Erdoğan said, speaking on the U.S. cooperation and military exercises with the YPG.

“We agreed today on the need to work together on this issue, which is one of Turkey’s main priorities,” Erdoğan said, indicating that the U.S. does not have a negative stance on this.

The PKK is recognized as a terrorist organization by the U.S., Turkey and the European Union, and Washington’s support for its Syrian affiliate has been a major strain on bilateral relations with Ankara. The U.S. primarily partnered with the YPG in northeastern Syria in its fight against the Daesh terrorist group, but Turkey has strongly opposed the YPG’s presence in northern Syria.

Ankara has long objected to U.S. support for the YPG, a group that poses a threat to Turkey and terrorizes local people, destroying their homes and forcing them to flee. Under the pretext of fighting Daesh, the U.S. has provided military training and given truckloads of military support to the YPG, despite its NATO ally’s security concerns. Underlining that one cannot support one terrorist group to defeat another, Turkey conducted its own counterterrorism operations, through which it has managed to remove a significant number of terrorists from the region.

Erdoğan had recently signaled that a new operation could also take place to tackle the terrorist organizations.

Speaking on the possible operation, Erdoğan said: “Of course, the operation will be conducted when necessary. There will be no step back and it is not possible that we give up on our fight against terrorist organizations.”

The president, during the weekend at the G-20 summit, also met with several other world leaders including Italy and France.

Relations with Italy were strained when Italian Prime Minister Mario Draghi called the Turkish president a “dictator” over the “Sofa Gate” crisis and protocol arrangement during a meeting with EU chiefs in Turkey. “This issue did not come up,” Erdoğan said, elaborating that he focused on how to soften relations and touched upon the historical relations and cooperation that both countries have, especially since the time of former Italian Prime Minister Silvio Berlusconi.

The president also met the likely successor of German Chancellor Angela Merkel, Olaf Scholz. He said that Scholz is no stranger to Turkey.

“He is from within the SPD (Social Democrats) and we have common friends. We will not feel out of place and neither will he.”

This article originally appeared in DAILY SABAH on 01 Nov 2021.