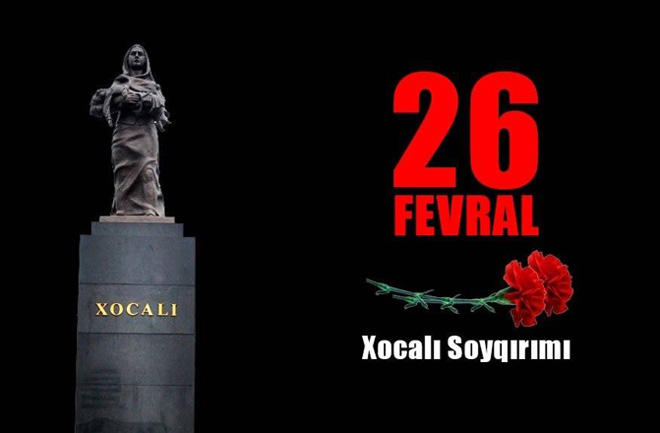 Mayor of Skokie (US State of Illinois) George Van Dusen signed a declaration on the occasion of the 29th anniversary of the Khojaly Genocide, according to Azerbaijan in Focus, reporting Trend News on February 18, with reference to the document.

According to the declaration addressed to members of the Azerbaijan Center of Midwest America and the Azerbaijani community of Illinois, as part of the armed aggression launched by Armenia against Azerbaijan since 1988 and ethnic cleansing policy against Azerbaijani people, on the night of February 25-26, 1992, Armenian armed units, supported by the former Soviet 366th motorized rifle regiment, committed genocide in Khojaly town and massacred the residents of this town attempting to flee the occupied town. As a result, the Armenian military servicemen killed 613 people (including 106 women, 63 children, and 70 elderly. Some experts call the Khojaly tragedy ‘Azerbaijani Srebrenitsa’.

The document emphasized that in 1993 the UN Security Council adopted Resolutions 822, 853, 874, and 884, which demanded the prompt and unconditional withdrawal of Armenian Armed Forces from the occupied territories of Azerbaijan, and stressed support of the country’s territorial integrity by the UN General Assembly, the European Parliament, the Parliamentary Assembly of the Council of Europe, the OSCE, as well as the U.S. State Department and the White House.

The declaration concluded that given all the above facts, Skokie’s Mayor George Van Dusen proclaimed February 26, 2021, as Commemoration Day of the Khojaly Genocide Victims.

On February 25-26, 1992, the Armenian Armed Forces, supported by the 366th infantry regiment of Soviet troops, stationed in Khankendi city, committed an act of genocide against the population of the Azerbaijani town of Khojaly.

As many as 613 civil residents, including 63 children, 106 women, and 70 old people were killed in the massacre, 1,000 people were injured, and 1,275 were taken hostage. Most of the town residents haven’t returned from the hostage, and their fate still remains unknown. After the withdrawal of the 366th regiment from Khankendi, the military equipment that belonged to it mainly passed to the Armenian separatists. 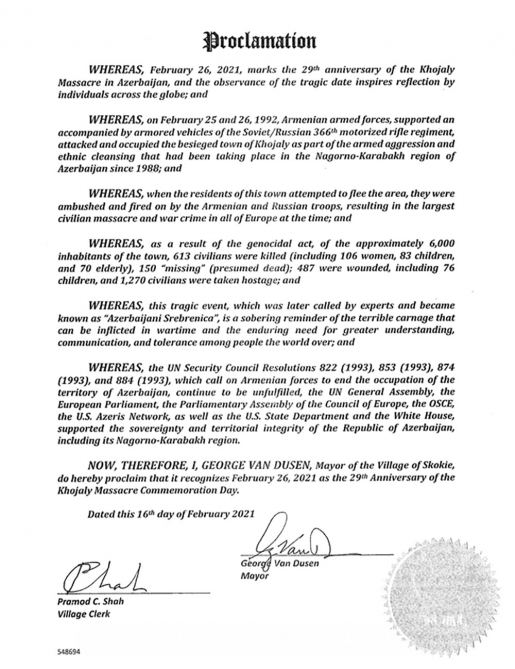