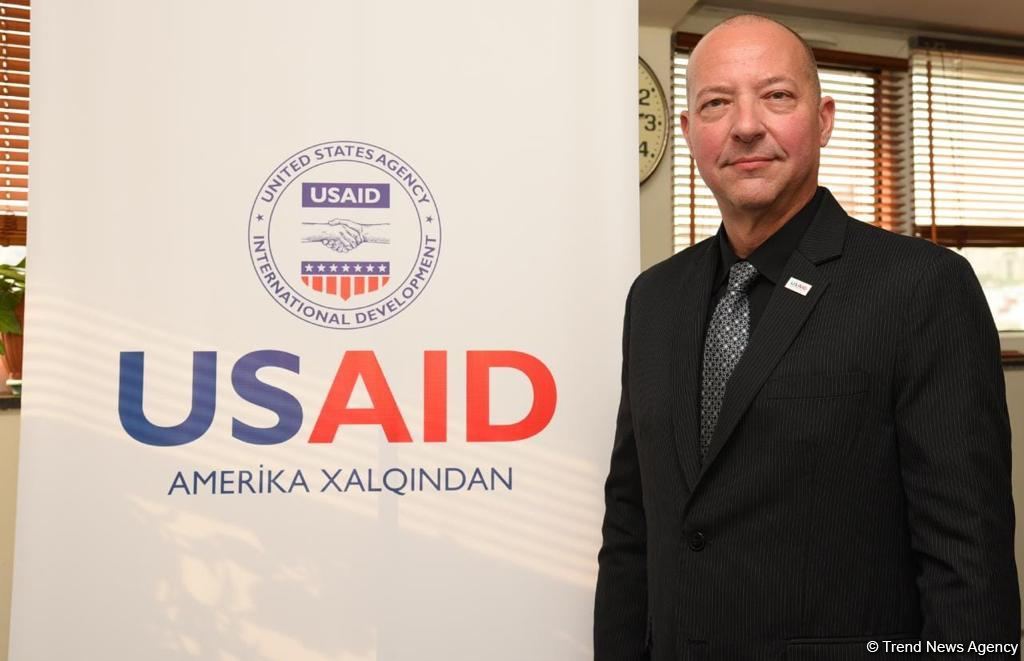 “We try to keep our focus on increasing exports, and we work together with Azerbaijani partners to identify barriers and recommend policy changes. And all this is done with the vision of promoting growth and the expansion of these businesses, which will create more jobs. We are really trying to make it easier for Azerbaijani agriculture enterprises to transport their agricultural goods to wholesale and retail markets, so those agribusinesses can access large markets in the city,” he said.

Regarding the regions of Azerbaijan, where USAID provides its support for the agriculture sector, Nehrbass mentioned several, such as Lankaran, Samukh, Ganja, Zaqatala, and Khachmaz.

The initiative, which is called USAID Private Sector Activity, uses a partnership and co-investment approach to help create a more resilient economy that also helps to enhance the business-enabling environment.

“So, what does it look like for agribusiness, for instance? We are supporting the growth of agribusinesses by the delivery of the customized technical assistance. To make it sustainable we utilize local business development service providers. So, these are organizations that are already here, in Azerbaijan, speaking the language, and knowing the country. Together we work on improving production and marketing of agribusiness,” he explained.

In addition to that, USAID also holds regular working groups that bring stakeholders and SMEs together with the representatives from the Ministry of Economy of Azerbaijan, Small and Medium Business Development Agency, and State Tax Service, Nehrbass said.

“We convene these working groups so stakeholders can identify barriers to small businesses, and working groups have produced action plans to address these challenges,” he noted.

Under the Memorandum of Understanding with Small and Medium Business Development Agency, USAID aims at supporting the capacity, productivity and competitiveness of Azerbaijani SMEs, the head of the mission added.

According to the head of the mission, the training is aimed to improve ’employability’ for young people of Azerbaijan.

“We are doing this in Ganja, Zaqatala and Sumgayit. The first 90 participants graduated this year, and the goal is to train 700 people by 2024,” he said.

USAID is implementing a project through the United Nations Development Program (UNDP) called “Economic Empowerment for Entrepreneurship and Employment”, which has been operating since 2015, for employment support for women and youth, Nehrbass said.

“A part of this activity that focuses on youth began in 2019, when USAID established professional growth and innovation centers in Ganja, Zaqatala and Sumgayit, with the support from the Ministry of Labor and Social Protection of Azerbaijan,” he said.

To date, USAID has provided training in terms of career planning, professional skill development, and entrepreneurial thinking to almost 600 young people, the head of the mission noted.

“The project also provided training for 900 young people online, during the COVID-19 pandemic. And about 500 young people have been trained in short-term technical workshops on hard skills, such as the use of Excel, social media management, graphic design. In total, this project has trained almost 2,000 young people since 2016,” he added.

USAID is also aimed at supporting women entrepreneurs in Azerbaijan. In this regard, USAID and and the American Chamber of Commerce in Azerbaijan (AmCham) are going to present a national business agenda for women in Azerbaijan.

“USAID engages with AmCham on a regular basis to improve business environment in Azerbaijan, in particular for women entrepreneurs. We work together, because AmCham helps us as an active member of a steering committee, which is devoted to developing a women’s national business agenda,” he said.

According to the head of the mission, USAID has been working with AmCham and other stakeholders for about a year and a half on the development of this business agenda, and the formal presentation to roll out the agenda was held on November 3, 2022.

Moreover, under the support from USAID, 200 women in Azerbaijan have already launched their own businesses.

“As of today, we have already trained over 1,000 women in Azerbaijan,” he said.

According to the head of the mission, USAID funds the United Nations Development Program (UNDP) to train women in running their own businesses.

“So, together with the UNDP and the State Committee for Family, Women and Children Affairs, we have established women resource centers in such regions of Azerbaijan as Masalli, Zagatala, Khachmaz and Sumgayit, and we also support other 6 centers in other locations,” he said.

As Nehrbass explained, those centers play a multifaceted role.

“The idea is basically in women coming together to receive business development training, creating network and learning from each other. And, besides providing businesses development support to women, these centers also provide crucial assistance to victims of domestic violence,” he said.

By improving the business environment for micro, small and medium enterprises, USAID is helping to start businesses that will help diversify and strengthen the non-oil economy in Azerbaijan, particularly women-owned businesses, the head of the mission added.

USAID’s overall goal in Azerbaijan is in advancing prosperity and building of people and communities, Nehrbass stressed.

“Over the past 30 years our bilateral partnership is reflected in USAID’s commitment of over $400 million to support Azerbaijan’s humanitarian and development needs. During my time here, I hope to strengthen our partnerships with the government of Azerbaijan, donor communities, private sector, and civil society – all in projects that will help improve the lives of Azerbaijanis,” he said.

According to the mission head, both the government of Azerbaijan, and the Government of the US have shared interests.

“For example, enhancing agriculture in Azerbaijan to help diversify the non-oil economy, strengthening health systems, and improving the well-being of women and youth – these are our mutual interests,” Nehrbass said.

Moreover, as the head of the mission pointed out, USAID pays close attention to the well-being of the internally displaced people in Azerbaijan.

“USAID has a very strong track record in working in Azerbaijan to assist IDPs. In early 1990’s we have provided support to over 800,000 IDPs in terms of housing, school repairs, primary healthcare, water, and agriculture. At the moment, we do not have any activities for IDPs. The US government regularly discusses the issue with the Azerbaijani counterparts on how we can best support the IDPs. So, this is something that is ongoing,” he added.

As Nehrbass pointed out, USAID’s general priority is on building a better environment for private sector growth with the emphasis on agriculture and tourism sectors, as well as the focus on devoting greater resources on promoting gender equality and women’s economic empowerment. These are the priorities that the mission head for USAID determined in cooperation with Azerbaijan in coming years.

“All of these initiatives together intend to create jobs and raise living standards. We will proceed with our current projects implementation in supporting women entrepreneurs, agriculture sector, agritourism, private sector development, combating human trafficking, developing the capacity of civil society organization, improving the transparency and responsiveness of the public institutions, as well as promoting youth development. And I would like to stress that in all of these projects we work in close cooperation with the government agencies like the Ministry of Labor and Social Protection, the Ministry on Internal Affairs, the Ministry of Agriculture, the Ministry of Economy, and many others,” the mission director concluded.