Where Is Your Christianity? An Armenian Priest With An Unforgettable Military Background

Almost immediately after the signing of the tripartite ceasefire statement over the Second Karabakh War on November 9, one of the most popular topics in the foreign media was the ‘fate’ of the Khudavank (Dadivank) monastery complex, according to ‘Azerbaijan in Focus’, reporting http://www.pressklub.az. Many ill-informed journalists have falsely sounded the alarm that ‘the shrine is in danger’ from the return of Azerbaijanis to the Kalbajar region. They forget that this complex has stood for centuries and was maintained and revered when the region was under Azerbaijani control. 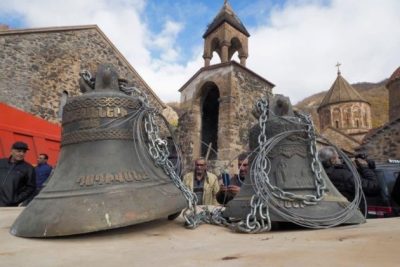 In the wake of these misleading reports in the Armenian, Russian and French media, the abbot of the monastery, Hovhannes Hovhannesian, was transformed into a hero and martyr. Having removed everything old and new from the ancient complex, even the bell made in 2015, he was initially going to leave, but as soon as he learned that Khudavank would be controlled by Russian peacekeepers, he decided to remain. Now, behind the backs of the peacekeepers, Priest Hovhannes can further sow hatred towards Azerbaijanis in the hearts of his brainwashed fellow believers. He will continue to act in the role of a historian, politician, or priest, distorting the past and present, and requesting assistance from his ‘Christian brethren’ in their ‘holy war’ against ‘hostile Muslims’.

This led us to enquire more about this Hovhannes who, in an interview with leading Russian newspaper Kommersant, just a couple of months ago, posed against the backdrop of the Kalbajar mountains with a cross in one hand and a machine gun in the other, advising us to rely on God and read the proclamation: “Don’t kill … Don’t say bad things… Don’t take what doesn’t belong to you”.

Back in December 2019, an Armenian media source gave this priest the soubriquet of ‘Warrior of the Spirit’. The publication reported that: “along with the cross, Ter-Hovhannes took up arms from the very first days of the war, realising it was necessary to take care of security, despite believing in God”.

Grant (secular name of Hovhannes) was born in 1963 in Soviet Azerbaijan in the village of Vank, Kalbajar region. When mass rallies began in January 1988 in the Nagorno-Karabakh Autonomous Region (NKAO) demanding reunification with Armenia, he rode his motorcycle to Khankendi almost every day. He shouted about the “restoration of historical justice” in the central Lenin Square. He was so obsessed with the idea that, surprisingly, he called his second son ‘Artsakh’, who was born in the same year of 1988. 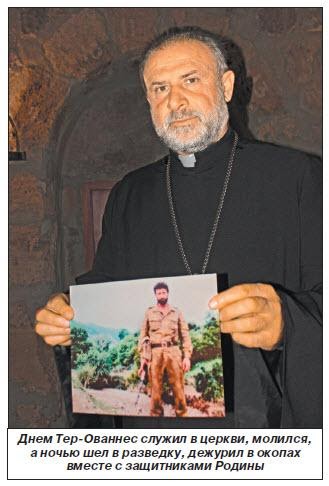 “Grant entered the Theological Seminary in Etchmiadzin, … after graduation in February 1992, he was appointed to the ‘Artsakh’ diocese… and with the blessing of the spiritual leader Pargev Srbazan, he became Ter-Hovhannes – the abbot of the Gandzasar Monastery,” the newspaper reports.

Meanwhile, a real war was flaring up in Nagorno-Karabakh. Having embarked on his mission as a spiritual pastor, Ter-Hovhannes did not confine himself to prayer: “I could not bless the soldiers, call them to defend the Motherland, and send them to the front, while I myself would only pray, hiding in a church. I could not help becoming an example, ” he says.

Ter-Hovhannes took up arms and personally went into battle. Then, leaving his machine gun at the church entrance, he went inside and prayed to God, asked for forgiveness and blessings … “Apparently, God blessed,” the journalist concludes, “Ter-Hovhannes served in the church during the day, prayed, and at night was on duty in the trenches together with the defenders of the Motherland…”

Further, another ‘heroic’ act of the ‘warrior of the spirit’ is reported, about how he first appeared in the monastery, of which he is now the abbot: in early April 1993, ‘with the liberation’ of Kalbajar, Father Hovhannes, together with the legendary Monte Melkonyan (member of the Armenian Secret Army for the Liberation of Armenia (ASALA) who fought in Lebanon and undertook terrorist attacks in Rome and Athens, was arrested in Paris, expelled from France etc – ed.), Norayr Danielyan (a militant arrested and sentenced to a decade of imprisonment by the Azerbaijani authorities in 1990 and subsequently exchanged for a group of prisoners – ed. .), together with other brave commanders, was the first to enter the territory of Dadivank.

Many years later (2015) Pargev Srbazan called on Ter-Hovhannes to undertake a new mission – the revival of the shrine of ‘Karvachar’ (by this time, the Armenians had already renamed Kalbajar – ed.) – then conquered with his active participation, resulting in the Khudavank monastery, which was also given a different name.

I don’t know what kind of spirituality that is embodied in ‘spiritual’ people who create shrines for themselves, and seize and appropriate other people’s religious monuments, declaring them to be their historical heritage. Nor do I understand the journalists of those reputable foreign media outlets who glorify the ‘peaceful abbot’ without bothering to at least find out something about his ‘glorious’ military past on the internet.

But here’s what I want to remind you: in April 1993, amongst the leading ranks of the Armenian soldiers who broke into Kalbajar, was Priest Hovhannes. They expelled 44,000 Azerbaijanis from there within 10 hours, testament to which is paid in the video below. By contrast, in November 2020, Azerbaijan gave 4000 Armenians illegally settled in Kalbajar two weeks to leave, thereafter extended at the request of the opposite side to 25 days. I think that only Russian mediating peacekeepers, under whose control Khudavank still remains, can answer the question as to why the Armenian side needed this extra time? By the way, they did not benefit Father Hovhannes. Ten days ago he was going to leave for Yerevan, and now he is not only determined to continue his religious service, yet has the temerity to ask his interlocutor from Kommersant “Why do Azerbaijanis come here at all?”