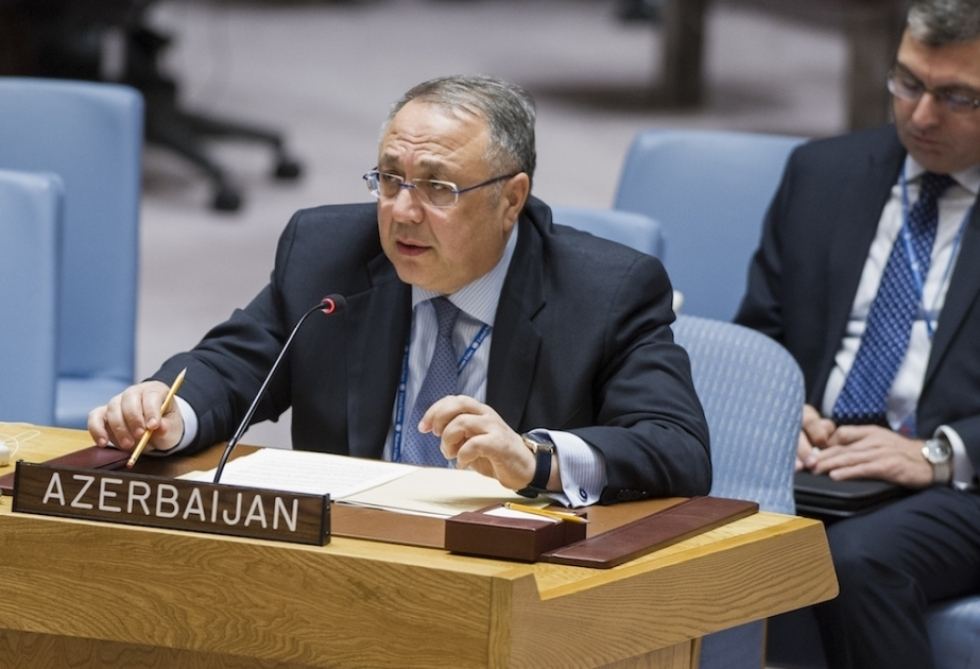 Aliyev made the remark at the virtual open debates held at the UN Security Council on the topic “Protection of facilities necessary for the survival of civilians” of the agenda “Protection of civilians in armed conflict”, according to Azerbaijan in Focus, reporting Trend News on April 29.

“Protecting civilians from direct attacks and attacks without targeting is one of the main tasks of the international humanitarian legal regime,” the permanent representative said.
“Azerbaijan is among those countries that have greatly suffered from the devastating consequences of the conflict [the Armenia-Azerbaijan Nagorno-Karabakh conflict],” Aliyev said. “As is known, Armenia unleashed a full-scale war against Azerbaijan in the early 1990s, as a result of which a big part of the Azerbaijani territory was occupied and was under occupation for almost 30 years.”

“During the conflict, Armenia has repeatedly violated the bans on attacks on civilians,” the permanent representative added. “The war claimed the lives of tens of thousands of people and ethnic cleansing of more than 700,000 Azerbaijanis were carried out in all the occupied territories.”

“Most of the occupied cities, settlements and villages were razed to the ground,” Aliyev said. “Moreover, the large-scale destruction and irreversible damage to the environment by Armenia have been characterized by the international community as a form of environmental aggression.”

The permanent representative stressed that there has been a repeated escalation in and around the occupied territories of Azerbaijan since 2015.

“Armenia provoked the large-scale hostilities on the line of contact and on the border with Azerbaijan in April 2016 and July 2020,” Aliyev said. “The UN High Commissioner for Refugees informed about the damage to the civilian property as a result of shelling and unexploded ordnance in Azerbaijani villages near the conflict zone in May 2016.”
“The cross-border attacks by the Armenian Armed Forces threatened strategic international oil and gas pipelines and the Baku-Tbilisi-Kars railway in the Azerbaijani territory in July 2020,” Aliyev said.

“Another act of aggression by Armenia in late September 2020 and the subsequent hostilities led to the numerous casualties among the Azerbaijani civilian population,” the permanent representative said. “Big damage was caused to the civilian infrastructure in several big cities of Azerbaijan outside the conflict zone.”

“The Armenian Armed Forces were also aimed at destroying Azerbaijan’s energy infrastructure,” the permanent representative said. “A ballistic missile fired at Azerbaijan’s Mingachevir city fell in close proximity to the Azerbaijan Thermal Power Plant, which is located near the biggest reservoir in the South Caucasus.”

“As a result of the counter-offensive undertaken and successfully carried out by the Azerbaijani Armed Forces, about 10,000 square meters of Azerbaijani territory with more than 300 cities, settlements, and villages were liberated from the occupation,” Aliyev said. “The scale of destruction, vandalism, looting in these territories is shocking and unprecedented.”

“The entire civilian infrastructure in most of these territories was looted and destroyed,” the permanent representative said. “Moreover, retreating Armenian Armed Forces and Armenian illegal settlers fleeing these territories dismantled and then burned houses, schools, and other civilian infrastructure, cut electrical cables and broke power line poles, chopped down trees, and set forests on fire in an attempt to destroy everything on these lands.”

“The destruction of civilian infrastructure and the presence of minefields in the territories liberated from the occupation is a big problem for the safe return of internally displaced people to their houses,” Aliyev stressed.
“The Azerbaijani government gives priority attention to the revival and reconstruction of these territories to ensure the rapid social, economic recovery and post-conflict construction,” the permanent representative said.

“The master plans of all cities are being prepared and a number of projects are being implemented with the participation of international partners,” Aliyev said. “At the same time, responsibility for heinous violation of international law must be an inevitable consequence of the committed offenses.”
“Fighting impunity is also an important preventive tool and an important prerequisite on the way to lasting peace and genuine reconciliation,” the permanent representative said.